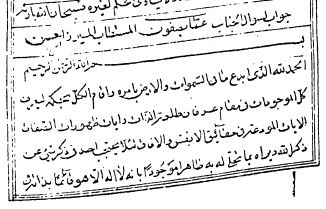 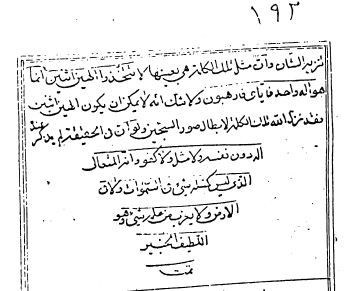 In his Sources MacEoin writes,

"(vii) A tafslr written in reply to Mīrzā Ḥasan Waqāyi`-nigār (the 'chronicler'). The recipient was, it may be assumed, an historian attached to the court of Manūchihr Khan. The commentary is an interpretation of two Qur'anic phrases: 'We are closer to him [man] than his jugular vein' (50:16) and 'a single rival' (112:4). A closing section deals with the subject of the movement of the heavens." (p.79).

At the very beginning of his comments on this phrase, its author underlines the utter singleness, isolatedness, transcendence and unknowability of the Divine Essence (al-dhāt). God has eternally "detached" the Divine "Names and Attributes" from referring to the "court" of His transcendent "Presence" (ḥadratihi) -- they apply primarily to His "Will" (al-mashiyyat). Nearness to the Divine Essence is impossible except by virtue of the theophany (tajallī) of His "Self" (nafs) the locus of His "Will" and of the Messenger or Manifestation of God. Qur'ān 50:16b alludes to the "sign of God" (āyat Allāh) which is found within the inmost human reality which is (symbolically speaking) the human "heart" (fū'ād) (see INBMC 40:181-183ff).

Praised be to God Who hath originated whatsoever is in the heavens and upon the earth through His Logos-Command (amr). He enabled everything to rise up through His Wisdom (ḥikmat) to the end that all existing things might be aware, on the level of philosophical gnosis (fī maqām `irfān),  of the Countenance of the Divine Essence (ṭal`at al-dhāt) and of the signs of the Manifestations of the Divine Attributes (āyāt ẓuhūrāt al-ṣifāt) which are the signs (al-āyāt) deposited in the realities of the [human] Selves and the Horizons (al-wada`at fī ḥaqā’iq al-anfus wa’l-ufāq). This to the end that none be veiled at the mention of anything pertaining to the Remembrance of God (dhikr-Allāh)  but that they should vision Him in the light of what He hath outwardly, concretely (ẓāhir an mawjūd an) Self-manifested unto him,  within him,  for He, no God is there save Him, One for [p. 181] an Eternity of Eternities, Substantive [Upstanding] by virtue of His Essence (qā’im an bi-dhātihi). He [God] indeed, in every degree, describes His Essene (dhāt) in terms of His Essence (bi-dhātihi) for whatsoever is other than Him…

[p. 183]… "As for that about which thou didst ask  regarding the meaning of His Utterance, exalted be His Remembrance,  "We are nearer to him [to man] than his jugular vein (ḥabl al-warīd)" (Q.50:16b). Now the reality of the meaning [of this verse] concerns [the matter of] nearness [proximity] unto God (qar