(Commentary upon the Surah of the Sun, Qur'an 91).

This wholly Arabic sixteen or more page exegetical treatise, the Tafsir Surat al-Shams of Baha'-Allah, most probably dates to the mid-late Acre -`Akka' (or West Gailean) period of its author's life, c. 1875-1885. It is a non-literal, sometimes esoteric interpretation of the ninety-first surah or (loosely) chapter of the Qur'an (Q. 91). 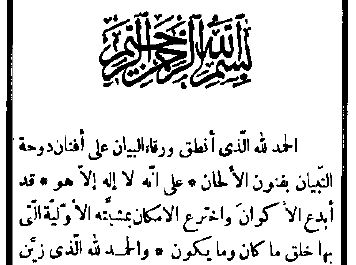 [1] Praised be to God Who caused the Dove of Exposition [the Bayan] (warqa' al-bayan) to cry out from the twigs of the lofty Tree of Explanation (afnan dawhat al-tibyan) with exquisite melodies (bi-funun al-ilhan) expressive of `He, no God is there except Him'. [2] He indeed originated the realms of being (al-akwan) and created the realms of the possible  (al-imkan) through His primordial Will (bi-mashiyyat-ihi al-awaliyya) by means of which He [also] fashioned all that hath been and all that shall ever be (wa kana wa ma yakun).

[3] Praised be to God Who ornamented the heaven of reality (sama' al-haqiqa)  by means of the Sun of mystic meaning (bi-shams al-ma`ani) and inner gnosis (al-`irfan)  upon which was inscribed though the Supreme Pen (al-qalam al-a`la), `The Kingdom belongeth unto God (al-mulk li-lahi), the Sanctified, the Help in Peril, the Self-Subsisting (al-muhaymin al-qayyum)'. [4] He it is who caused the Most Great Ocean (al-bahr al-a`zam) to be made manifest and constituted of [cosmic] water (al-ma') issuing from a Fount  expressive of the (Arabic) Letter

..  ]("H") (`ayn al-ha'), realized through the Most Pre-Existent Name (al-ism al-aqdam) from which the  Primordial Point

] (al-nuqtat al-awwaliyya) was differentiated and the All-Encompassing [Comprehensive, Universal] Word (al-kalimat al-jami`a) [perhaps al-baha'] was made manifest as was the sphere of [inner] Reality (al-haqiqa) and that of the [outer] religious Law (al-shari`ah)...

On another level [station] (maqam), furthermore, it [the "sun"] denotes the prophets of God (anbiya' Allah) and His intimate associates [friends, pure ones ...] (sifwiyya)  for such are the very "suns" (shumus) of His Names (asma') and of His Attributes (sifat) amongst His creatures. Indeed! Were it not for them, no one woud have been  irradiated by the Lights of deep knowledge [gnosis] (anwar al-`irfan) just as is evidenced by the fact that every  religious community  among the religious communities (milla min milal)  of the earth (al-ard), hath been irradiated by  a "sun" among these  resplendent "suns" (shams min hadha al-shumus) ...