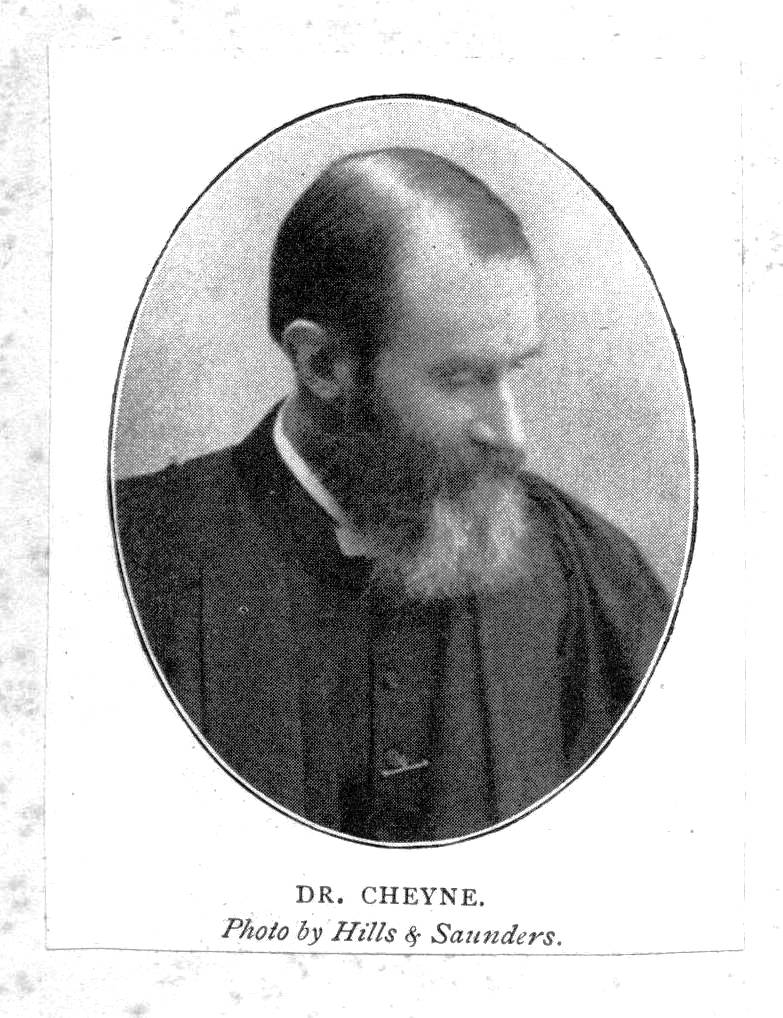 A one time fellow of the British Academy, the London born Thomas Kelly Cheyne, D.Litt. D.D. (= TKC., 1841-1915) was, without doubt, the most eminent western academic to become a Bahā'ī during the ministry of `Abd al-Bahā (1892-1921). Oxford educated (BA 1862) and one who studied for a while under the great Old Testament scholar and orientalist Heinrich Ewald (1803-75) at the University of Göttingen, he was ordained an Anglican priest in 1865 (later he was canon of Rochester). Between 1870 and 1871 TKC lectured on Hebrew and divinity at the University of Oxford where he lived most of his life. Between 1885 and 1908 he was Oxford University's prestigious `Oriel Professor of the Interpretation of Holy Scripture'.

Influenced early on by German radical criticism, TKC was an important pioneer of the "higher criticism" of the Bible in the English-speaking world. His major works within the field of Old Testament Studies, his specialist field, include articles in the 9th edition of the Encyclopedia Britanica, the Expositor and several others periodicals and number such books as The Prophecies of Isaiah (2 Vols., 1880-81), Job and Solomon (1887) and The Origin and Contents of the Psalter (1891; the Bampton Lectures for 1889). With J. S. Black he co-edited the monumental Encyclopædia Biblica (4 Vols., London, 1899-1903) -- which contains numerous entries by him, many influenced by the so-called Jerahmeelite theory (for a summary see Charles, 549-50).

TKC was the first person whom `Abdu'l-Bahā met on his arrival in Oxford on December 31, 1912. The encounter was "fraught with pathos" (Blomfield, 168). Impressed with TKC's ardent devotion and intense scholarly activity despite disabilities, `Abdu'l-Bahā several times lovingly kissed and caressed his head. The angelic qualities of the Biblical scholar's wife and carer in infirmity, the poetess Elizabeth Gibson Cheyne, were very greatly praised by the Master (Zarqani cited Balyuzi, 353). During this period `Abdu'l-Bahā' accorded TKC the epithet Ruḥānī ("Spiritual"), subsequently addressed him as "my spiritual philosopher" (SW IV:16 [Per. 3-4]). He reckoned him unique among professors in entering the "world of the Kingdom" (ibid). In a letter to the Manchester Bahā 'ī Mr. Craven dated Jan. 31st 1914 TKC wrote, "Allah-u-Abhā! Dear Bahā'ī brother..Why I am a Bahā'ī is a large question, but the perfection of the character of Baha'u'llah and Abdu'l-Baha is perhaps the chief reason.." (`9' Beginning.. 8-9). Partially indirectly supervised by `Abdu'l-Bahā, his work The Reconciliation of Races and Religions was published in London in 1914 (xx+260 pp.). It largely consists of Bābī- Bahā'ī biographical and historical notes and, among other things, was, "designed to contribute to the cause of universal peace" (Preface vii).

TKC's becoming a Bahā'ī did not completely overrule his church membership or, in fact, his supportive and open attitude towards other spiritual pathways (i.e. The Society of Friends). After becoming a Bahā'ī and though in very poor health, he continued to write several works of Biblical scholarship championing a North-Arabian/ Jerahmeelite theory (i.e. Fresh Voyages on Unfrequented Waters) becoming further "renowned for his extreme and unconventional views" (Bowden, 30). Uninformed by Bahā'ī Biblical exegesis and in large measure the eccentric products of his philological genius, they were generally very badly received. His Bahā'ī status was largely ignored or played down though his thirst for knowledge, his kindly, gargantuan scholarly spirit was much respected. Doubtless referring to his championing of liberal academic insights in biblical studies and related fields as well as to his Bahā'ī activity and writing (rather than simply to his increasingly eccentric biblical scholarship) `Abdu'l-Bahā in a scriptural Tablet or letter to TKC wrote, "It is.. my hope that in the future the East and the West may become conscious that thou wert a divine philosopher and a herald of the Kingdom" (cited Balyuzi, 354).

The first wife of TKC was Frances E. Godfrey (1844-1907), the third daughter of the Revd D. R. Godfrey, fellow of Queen's College, Oxford, and rector of Stow, Norfolk, whom he married on 31st January 1882. His second wife was the poetess Elizabeth Gibson Cheyne (1869-1931) daughter of John Pattinson Gibson (a chemist of Hexham) whom he married (aged 69) on August 28th [19th] 1911 about four years after the death of his first wife. Elizabeth Gibson was the sister of the `War Poet' Wilfred Wilson Gibson (b. Hexham 1878-1962): see URL: http://www.firstworldwar.com/poetsandprose/gibson.htm.  Both  of T.K. Cheyne's marriages were childless.