The Tasbih (" Doxology") of Fatima and the Commentary of the Bab thereon. 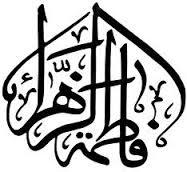 THE TASHIH-DOXOLOGY OF FATIMA, THE PURE ONE.

"God is not worshipped by anything more meritorious than by means of the Tasbih of Fatima Zahra (the Pure One). Were there anything superior to it, [recited after every salat,  obligatory prayer] the Holy Prophet would assuredly have granted this to her eminence Fatima" (from a tradition of the fifth Imam, Muhammad al-Baqir, recorded in volume 4 ( p. 1024) of the  Tafsil Wasa'il al-Shi`a ila tahsil masa'il al-shari`a of the famous Shi`i hadith expert Muhammad ibn al-Hasan al-Ḥurr Al-ʿĀmili    (b.1033/1624 - d. 1104/1693),

The Tasbih  (Glorificatory Rosary) of Fatima and the Commentary of the Bab thereon.

A variety of Sunni and Shi`i traditions give the occasion for the advice of the Prophet Muhammad about the recitation of 99 or 100 invocatory repitions of key Islamic In an Imami Shi`i hadith or sacred tradition of the Prophet Muhammad proffering advice to his daughter Fatima, instructed her to recite before sleep thirty-three - or more - times each of the following invocations:

The Prophet added, "You will find this more helpful than an assistant."

Fatimah (R.A.) responded [by saying] "I am happy with whatsoever would satisfy God and His Prophet."

This ritual act which involves 99 or three times thirty-three (or 100) repetitions centering on the greatness of the  Godhead, Allah, because it commences with the tasbih Subhan Allah' = "Glorified be God" , a ritualistic doxology ("glorification") referred to as theTasbih Fatima.

In his massive Shi`i encyclopedia  named the  Bihar al-anwar (Oceans of Lights), Muhammad Baqir Majlisi records a tradition to the effect that Imam `Ali said to a man from Bani Sa'id:

`Shall I teach you something that is better for you than a servant and a world with everything in it? After every prayer say: Allahu Akbar thirty four (34) times, Alhamdulillah thirty three (33) times and Subhan Allah thirty three (33) times then conclude that with la illaha ila Allah. Surely this is better for you than that which you wanted and the world and its belongings.'

In other contexts Fatima is advised by the Prophet (see above)  to recite similar phrases in devotional contexts. Hence this practise came to be known as the Tasbih Fatima, the Doxology of Fatima. A related tradition deriving from the sisth Imam Ja`far al-Sadiq (d.      )as recorded in the Mishkat al-anwar fi ghurar al-akhbar that a man  went to see Imam Ja`far al=Sadiq who began speaking though he was not properly heard. The listening companion asked for further clarification and the Imam counselled him asking why he was not given to reciting the Tasbih Fatima. Asked foir clarification Imam Sadiq said: "You say "God is Greatest" thirty four times, "Praise be to God" thirty three times, and "Glory to God" thirty three making a total of one hundred times." On his performing this ritual act it is reported that the hearing of this enquirer was cured or improved.

A considerable body of religious literature is devoted to the Tasbih Fatima.

The Commentary on the "Tasbih Fatimah" of the Bab.

According to MacEoin this rare, around twenty page text is appended to the Cambridge Browne MS. of Tafsir Surat wa 'l-Asr. It has been made available on the H-Baha'i website :  "Sayyid `Ali Muhammad "the Bab" Shirazi. Tasbih Fatimah. (In Praise of Fatimah). British Manuscript Project 745 (1)b, University of Michigan. Published in facsimile, Lansing, MI: H-Bahai, 1998. Available on the World Wide Web at /~bahai/areprint/bab/S-Z/tasbih/tasbih.htm

The opening text of this ms. seems confused though it ends as follows: 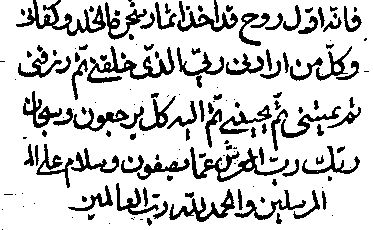