This brief  and early writing of the Bab seems to be that referred to in some versions of his  Kitab  al-fihrist  (Book of the Index) and would thus predate the date of its composition in 1261/1845. The text in reply to a question about the al-lawḥ al-maḥfūẓ  is translated below from INBA Ms. 6006C., 79-80. Aside from this ms.  version, I am not aware of any others. As  this text is not always clear, I would greatly appreciate copies of further mss. 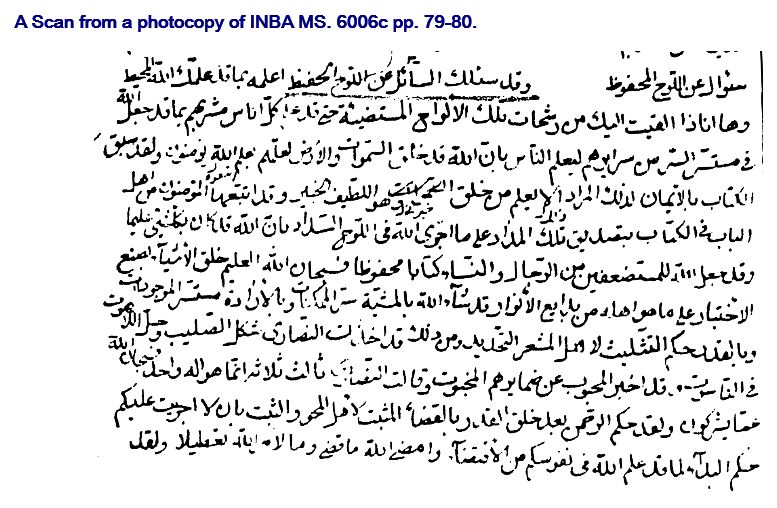 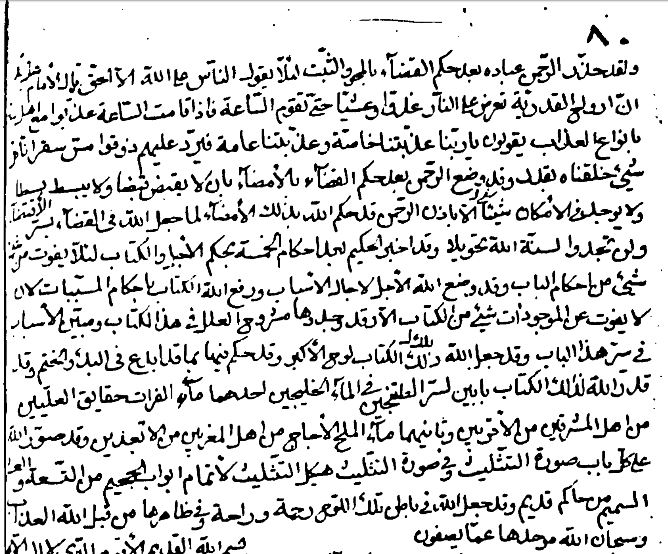 [1] The questioner hath assuredly asked thee about al-lawḥ al-maḥfūẓ [al-ḥafīẓ] ("The Preserved Tablet"). [2] Inform him then according to what God, the All-Encompassing (al-muḥīṭ), hath taught thee [the Bāb] ...  [3] Now I   shall assuredly cast upon thee something of the  sprinklings [revelations] (rashḥāt)  of those splendid [Archetypal, Guarded] Tablets [of Destiny] (al-alwāh) [4] until [such time as] all  people become aware of the source of their regulated condition [lit. drinking-place, mashrab). [5] This in view of the fact that God ordained (ja`ala) that the  supremely secreted mystery (fī mustansirr al-sirr) of  their [future condition] be something concealed (sarā'ir) for [6] He hath assuredly taught the people that God did indeed create the heavens and the earth for their instruction in the knowledge of God (`ilm Allāh),  for their coming to faith.  [7] And it was undoubtedly the case that the "Book [of Destiny]" (al-kitāb)  took precedence relative to [recording] the [actual] condition of [peoples'] faith (bi'l-īmān).

[1] Wherefore was the intention nothing other than that the creatures should be unaware of their [resultant] state for the matter is not  something disclosed. [2] He [God] is the Subtle, the Well-Acquainted. [3] These two [conditions] are both subordinated to ??... as opposed to the sincerely motivated people of the Gate (ahl al-bāb) in the Book (kitāb).  [4] That is the ink which God caused to flow in the  obstructing Tablet (al-lawḥ al-saddād) for God is indeed one well-informed of everything. [5] God did make for the weak and arrogant ones, [in faith] whether men or women, a preserved book (kitab an maḥfūẓ an). [6] So praised be  unto God who created everything according to a chosen artistry in the light of what it is [destined to be].

[1]... from the wonders of the [divine] Lights God willed through the mashiyyat ("divine Will") the mystery of contingent Beings (sirr al-mumkināt), through the al-irādat  ("divine Intention") [he originated] the inmost secrets of existent realities (mustansirr al-mawjūdāt) and through al-qadar ("divine Foreordainment") [he ordained] the decree of triplicity [threefoldness] (ḥukm al-tathlīth)  as pertains to the people of sensate disposition (ahl mash`ar),   which is a restrictive [delimiting]  state (al-taḥdīd). [2] "It was from this [threefoldness] that the Christians took the form of the cross (shakl al-ṣalīb) and [the idea of] the descent of the Divinity (al-lāhūt) into the human realm (al-nāsūt)". [3] The position of the Beloved  (al-maḥbūb)  [Jesus] was announced contrary to their inmost conscience as the Beloved (al-maḥbūb) [God] [4] And thus did the Christians exclaim, "The third of three" (thālith al-thalātha) (Q.5:87) even though God is [categorically] One (wāḥid). [5] So praised be God above their joining partners to God (shirk).

[1] And the All-Merciful decreed after He created al-qadar  (the divine Foreordainment), the divine Accomplishment (al-qiḍā') as pertains to the people of  uncertainty [obliteration] (al-maḥw) and firmness [strength] (al-thabt), for the decree of divinely altered fate [?] (ḥukm al-badā) [al-bidā'] does not pertain to them [2] for when God taught their particular selves it was  necessarily something pre-ordained (al-iqtiḍā'). [3] Thus did God cause them torment (IV-m-ḍ-y) in accordance with the divine decree though that was not something which  unendingly (ta`ṭīlan)  derives from God.

[3] The All-Merciful hath indeed cautioned His servants as accords with the decree of forthcoming judgement (ḥukm al-qaḍā) in the light of [such factors] as [faith] negation (al-maḥw) and steadfastness [of faith] (al-thabt),  perchance, that is, the people will affirm nothing but such truth as accords with God['s will]. [4] The Imam said,

"Human spirits pre-destined [for Paradise]  (al-arwāḥ al-qadariyya)  are exposed to hell-fire... until the [eschatological] "Hour" (al-sa`at). [5] And when the "Hour" is realized they are tormented along with the people of [infidelity ? text unclear] at the [judgement Day] when there is differentiation for punishment (bi'l-anwā` al-`adhāb). And they will [petition God] saying, `O our Lord! Do thou subject us to punishment [both] for a specific reason and also punish us generally?' And He will take issue, disputing against them, and they shall be [made to] taste a palpable sickness, something inducing sleep which We created according to the Divine Predestination [Foreordainment] (bi'l-qadar).... ["]

[1] And the All-Merciful set down, after the stipulation of the divine Foreordainment [Predestination] (ḥukm al-qiḍā'), [He initiated]  the realization of divine Determination (al-imḍā'). This  implies that He will never either firmly seize anybody [in divine determinism] nor ever graciously extend [His favor] [in divine  foreordination] [to anybody]. [2] And, furthermore, He shall never single out [compel, w-j-d] any single thing within all existence (fi'l-imkān)  save [ it is fully in line] with the express permission of the All-Merciful. [3] God expressly decreed through [the realization of] divine Determination (al-imḍā), that  when God has ordained (j-`-l) something through divine Foreordainment (al-qiḍā'), [it was yet something] in line with the secret of  what is required [necessary]  (sirr al-iqtiḍā).  [4] And they shall never find the practise of God (sunnat Allāh) to be something necessitating alteration (taḥwīl an).

[1] And the Wise One (ḥakīm)  did assuredly announce after these five modes (aḥkām al-khamsa)*  [2] the   [sixth]  divinely allotted deadline (al-ajl)  and   [seventhly] the "Book" (al-kitāb),  perchance there will never expire anything [determined by] the dictates of the Bāb (aḥkām al-bāb).  (3) And God assuredly determined the allotted time (al-ajl) of the various [allotted] deadlines (ājāl) [of things]  to be determinative of their causes (li-ajāl al-asbāb). [4] And He raised up the Book (al-kitāb)  through the instrumentality of these aspects, namely the [seven  interacting] causative factors (bi-aḥkām al-musabbibāt)  for there does not fail to be realized  out of all existence the essence of any single thing [the destiny of ] which is [written up] within the Book (al-kitāb) save, that is, there was assuredly already found therein the ramifications of its causality (mashrūḥ al-`ilāl),  within this selfsame Book. [5] This furthermore, along with an exposition of the causes determinative of the mystery of this Gate (fi sirr  hadha al-bāb).

[1] And God assuredly decreed that that Book (al-kitāb) be the Supremely Great Tablet (al-lawh al-akbar). [2] And therein He assuredly decreed the generative locus  relative to the beginning and the end [of things]  (abda` fi al-bad` wa'l-khatm). [3] God did indeed foreordain for that Book (al-kitab)  two Gates (bābayn) unto the mystery of the two gulfs (li-sirr al-ṭutunjayn), through the water of the two Gulfs (mā’ al-khalījayn).  [4] One of these two [streams of water] is the water of the Euphrates of the realities of  the elevated beings (mā’ al-firāt ḥaqā’iq al-`aliyyīn) [who are] from the inmates of the two Easts (min ahl al-mashriqayn), from the two [regions] most proximate [unto God] (min al-aqrabayn). [5] The second of the two [streams] is the water of the fiery Hellish expanse of the saline bitterness [streaming] from the inmates of the two Wests (min ahl al-maghribayn), from the two [regions] most remote [from God] (min al-ab`adayn [sic.]).

[1] And God fashioned above every ["western"] entrance (`alā kull bāb) is the triadic [trinitarian] form (ṣūrat al-tathlīth). [2] And within the triadic  form is the trinitarian [threefold] personage [form, temple = Jesus as one wrongly worshipped?] (haykal al-tathlīth) [leading] unto the totality of the gates of Genenna  (li-tamām abwāb al-jaḥīm),  the nineteen waystations of the pre-existent Judge (min al-ḥākim al-qadīm) (cf. Q. 74:30-31 "over it are nineteen [angels]"). [3] And God assuredly made in the interior dimension (bāṭin)  of that [aforementioned Guarded] Tablet [of Destiny] (al-lawḥ [al-maḥfūẓ])  [naught but]  a Mercy and a [sweet] repose  (raḥmat wa rāḥat)  [4] though relative to its exterior dimension (ẓāhir)  did he of old ordain punishment (al-`udhāb). [5] And praised be unto God, their Unifier (mawaḥḥid) transcendent above whatsoever they resolve.