Some Notes on the Arabic term al-Mashiyya (“The Divine Will”)...

Some notes on the Arabic term al-Mashiyya (“The Divine Will”) and associated cosmogonical-theological hypostases in select Islamic, Shī`ī-Shaykhī and Bābī-Bahā’ī literatures.

This Note was originally posted on the list serve Talisman in the mid 1990s and is now being revised and extended -2020.

The various cosmogonic, cosmological and theological senses of   مَشِيَّتِ  mashiyya (= Per. mashiyyat) in Arabic and Persian literatures are centrally important to any consideration of the Shī`ī-Shaykhī,  Islamic background of the Babi and Baha'i religions. Babi-Baha’i doctrines pertaining to creation, prophetology-theophanology and the maẓhar-i ilāhī (Divine Manifestation) seen as the Locus of the primordial, divine Will,  are closely related to the Islamic nexus of ideas associated with or related to مَشِيَّتِ  mashiyya understood as indicating the "Will" of the supreme and transcendent Godhead. Babi-Baha’i  doctrines are set forth in a voluminous and still little studied 19th century Arabic and Persian sacred scripture. It was  set forth in early Qajar Iran by the Bab (d. Tabriz 1850 CE) and  throughout the Ottoman dominions --  spanning (modern) Iraq, Turkey and Palestine-Israel -- by Mirza Husayn `Ali Nuri Baha-Allah (d. Acre, 1892 CE) who claimed to be the Bab's successor and the widely expected  universal eschatological messiah figure.

Firstly, there are important Arabic traditions about al-mashyiyya in the important early Shi`i compendium of traditions (aḥadīth) of Muhammad al-Kulaynī (d.c. 329/920) known as al-Kāfī fī `ilm al-dīn (The Sufficient for the understanding of Religion). In its Kitāb al-tawḥīd (Book of the Divine Unity) the centrality of mashiyya as a theological-cosmological concept is evident. References to al-mashiyya in Bābī-Bahā'ī scripture are most centrally rooted in a number of key Shī'ī traditions deriving from various of the the (twelver) Imams. Among them the following tradition related from Abī `Abd-Allāh [= Imam Ja`far al-Sadiq] (d. c. 148/765) which is  frequently cited and commented upon by the Bāb:

"There is not a single thing in the heavens or on the earth but came to be through these seven factors (khiṣāl) :

An almost identical hadīth to the above, narrated through Abū'l-Ḥasan Mūsā ibn Ja`far, reads:

"There is not a single thing in the heavens or on the earth but came to be through these seven [factors]:

And whoso supposes [the centrality of] other than this [schema] assuredly attributes a lie unto God or disputes with God who is to be exalted and glorified (ibid 1:149-150).

Following these two traditions (cited above) there is a section in al-Kāfī entitled, bab al-mashiyya wa'l-irāda ("Section on the Divine Will and the Divine Intention") which contains six traditions (see ibid 1:150-152). In the first of them Abī `Abd Allāh [=Imām Ja`far al-Ṣādiq] is cited as having said,

The next tradition set down in al-Kāfī is unusual in that it records Imam Ja`far reporting that God had no particular liking when He was involved in willing, intending, foreordaining and accomplishing (cf. 1->4 in the first tradition cited). This enigmatic ḥadīth is probably intended to indicate God's remoteness, his abstraction from these processes in the light of His transcendence and incomprehensibility.

The intention of the Primordial Adam is the Mashiyyat (the Primal Will).

The occurrence of mashiyya ("the [Divine] Will") as the first (or fourth) of the seven realities giving rise to existing things lies behind many of the Bb's references to the Divine Will (al-mashiyya) as the primordial creative reality. The transcendent, unknowable God, Who is abstracted from creation and direct involvement in the creative process, did not Himself call existence into being but accomplished this through the Logos-Reality of the Manifestation of God who is the locus of al-mashyiyya ("the [Divine] Will"). There are a very large number of references to the al-mashiyya or al-mashiyya  al-awwaliyya (The Primal Will) in the Bāb's writings. Only a few such passages can be noted and commented upon here.

Dating to early 1844, the Bab's (pre-declaration) Tafsīr sūrat al-baqara ("Commentary on the qur'anic sura of the Cow = Q. 2) contains an interpretation of the first couple in which Adam is related to al-mashiyya ("the Divine Will") and Eve to al-irādah ("the Divine Intention"). The scriptural reference to Eve's being created from Adam's rib is interpreted in terms of the of the secondary or derivative nature of al-irāda ("the Divine Intention"), a secondary reality dependent upon the primary reality which is al-mashiyya ("the Divine Will"). These two primordial hypostatic realities are also symbolic of the Prophet Muhammad (d. 632 CE) (= al-mashiyya) and his son-in-law and successor `Alī  ibn  Abī  Ṭālib (d. 40/664) (= al-irādah).

An Extract from the Epistle of the Bab to the Vali- Governor of Shustar (c. 1845). 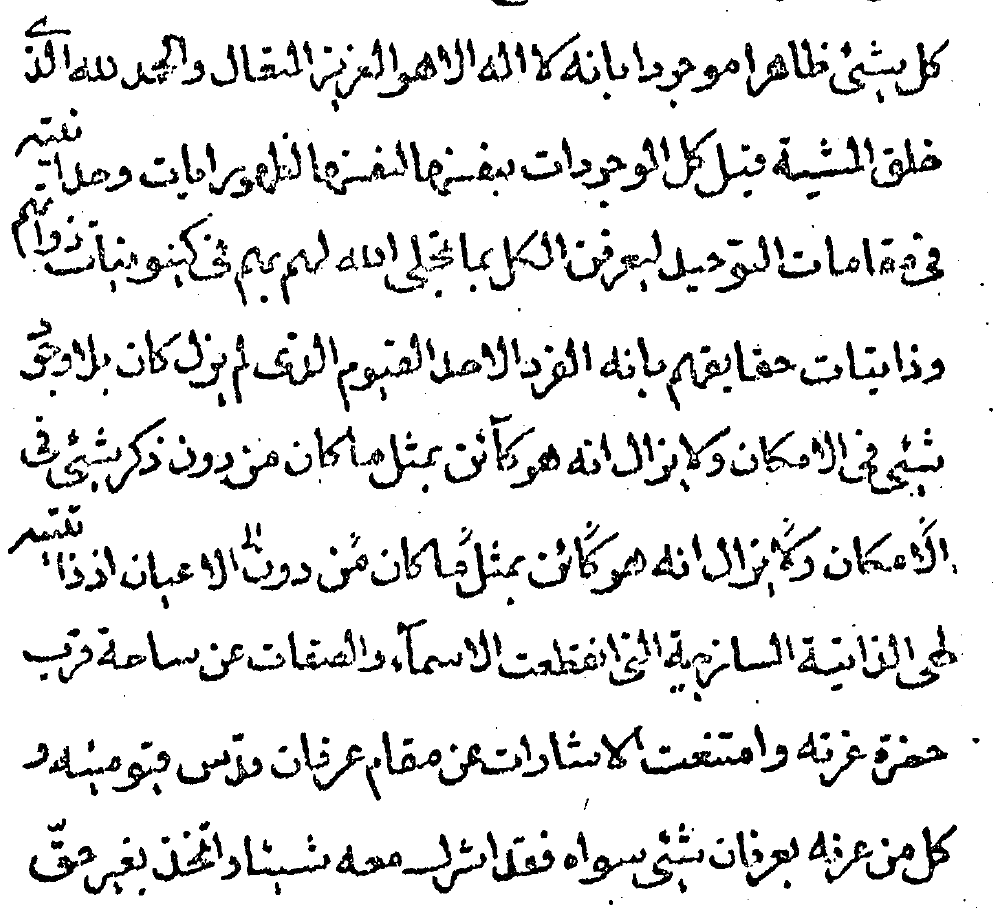 He is One Elevated,

Praised be unto He Who  cast inspiration (?) upon such as are in the heavens and upon the earth by means of His Wisdom (hikmat) perchance none might be veiled from the manifestation of the Light of His Countenance (nur tal`atihi)...

And praised be to God who created al-Mashiyya (the [Primal] Will) prior to all the realms of existence (qabl kull al-wuhudat) by means of His Own Logos-Self (bi-nafsi-ha), for His Own Logos-Self (li-nafsi-ha), for the Manifestation of the [revealed] verses (ayat) of His Divine Unicity (wahdaniyyati-hi) in the stations of the Divine Unity (maqamat al-tawhid). This to the end that He might inform all that God did indeed divulge His Glory [reveal himself] (tajalli Allah) unto them, before them [cf. Q. 7:143] in the very ontological realities [beingnesses] (kaynuniyyat) of their own [personalized] essences (dhawat) as well as the essential aspects of their realities (dhatiyyat haqa'iq) for He is indeed the Unique (al-fard), the One (al-ahad), the Self-Subsisting (al-qayyum). He is the One Who hath ever been eternally without anything alongside Him within the Realms of Existence (al-imkan). Never in fact was He Existent (al-ka'in) relative to the likeness of anything that  existed pertinent to whatsoever might find mention in the realms of possibile existence (al-imkan)! Eternally forevermore was He Existent (al-ka'in) independent of the likeness of anything aside from potential essences (al-a`yyan)!

In his Risāla fī’l-nubuwwa al-khaṣṣa (Trestise on the Specific Prophethood [of Muhammad]" 1847) the Bāb at one point extols the uniqueness of the name Muhammad since, like the Arabic word Mashiyya ("Divine Will"), it begins with the letter "M" (mim): "there is nothing in the created realms comparable to the name Muhammad since the letter "M" (mīm) is the first of the letters of the divine Will (al-mashiyya). So when that letter appeared is his [Muhammad's] name it was a proof that he is in the Pillar of the element Fire (rukn `unṣār al-nār)..." (INBAMC 14:338).   For the Bab in this work, “the appearance of the body of the Prophet Muhammad in the world zamān (“time” in this world) is "the appearance of the Divine Will (al-mashiyya) in the Primal Creation (al-khalq al-awwal)." (Ibid, 344).  There are quite a large number of the Bāb's works in which the theological role of al-mashiyya   ("the divine Will") is celebrated as the locus the divine theophany, the primordial foundation or basis of the Reality and “Person” of the Divine Manifestation.

The Bab opens his  Fī al-jasad al-nabī (On the Body of the Prophet [Muhammad]) as follows :

Praise be to God Who hath manifested Himself (tajallī) within and through existing realities by virtue of the theophany of His Divine Will (bi-zuhūr al-mashiyyatihi). This to the end that He might inform all existing things (mumkināt) that God made the realities of the essences of their beings (ḥaqā'iq dhātiyyāt kaynūniyatihum) through the modes of the Divine Activity (maqamāt al-fi`l) and the manifestations of passive receptivity (ẓuhūrāt al-infi`al)."

If thou art sailing upon the sea of God's Names, which are reflected in all things, know thou that He is exalted and sanctified from being known through His creatures, or being described by His servants. Everything thou beholdest hath been called into being through the operation of His Will. How can such a created thing, therefore, be indicative of His essential oneness? God's existence in itself testifieth to His Own oneness, while every created thing, by its very nature, beareth evidence that it hath been fashioned by God. Such is the proof of consummate wisdom in the estimation of those who sail the ocean of divine Truth.

The following paragraph make a clear identification of the Dhikr-i awwal ("First Remembrance"), the locus of the divine manifestation, with the mashiyyat, the Primal Will of God:

If, however, thou art sailing upon the sea of creation,  [126] know thou that the First Remembrance, which is the Primal Will of God, may be likened unto the sun. God hath created Him through the potency of His might, and He hath, from the beginning that hath no beginning, caused Him to be manifested in every Dispensation through the compelling power of His behest, and God will, to the end that knoweth no end, continue to manifest Him according to the good-pleasure of His invincible Purpose.