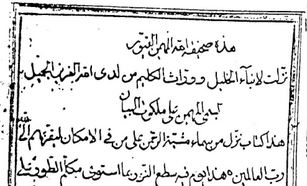 The opening lines of the Arabic Sahifat-Allah of Baha'-Allah are cited above from an unpublished, uncatalogued manuscript. It is an important text which most likely dates to the mid. 1880s or later and is primarily addressed to Jews who are referred to as the "progeny of the Friend (anba' al-khalil)", the `Friend of God' being Abraham, and the legacy of the Speaker (warath al-kalim) by whom Moses is meant. An opening line giving the title preceeds the new Baha'i basmala which alludes to Baha' Allah as the Greatest Name or one al-Qayyun (Self-Subsisting). After the opening paragraphs various most probably recent  Hamadani Jewish Baha'is converts are addressed with deep proclammatory statements. In the original ms. I have translated there are marginal notes identifying in more detail the persons addressed though these are all but incomprehensible, not being written very clearly written (at least in the phorocopy I have access to).

"This is the Sahifat-Allah (Scroll of God),

the Help in Peril (al-muhaymin), the Self-Subsisting (al-qayyum)!

It was sent down for the progeny of the Friend (anba' al-khalil) [= Abraham] and the legacy of the Speaker (warath al-kalim) [= Moses, the Jewish community], on behalf of God, the Mighty (al-`aziz) and Beauteous (al-jamil).

In My Name, the Help in Peril

[for those] within the Kingdom of the Exposition (malakut al-bayan)!

This is a Book which was sent down from the heaven of the Divine Will of the All-Merciful (sama' mashiyyat al-rahman) unto whomsoever lieth within the realm of Being, to the end that it might cause them to be established [bring them solace] before God, the Lord of all the worlds. This is indeed the Day in which the Light (al-nur) hath radiated forth in view of the fact that the Speaker on the Mount [Sinai] (mukallim al-tur) [Moses = Baha'-Allah] hath been established upon the Throne of the Divine Theophany [Manifestation] (`arsh al-zuhur). And He hath indeed cried out before the countenances within the Dominion [or Rulers, King(s)] (wujuh al-mulk), for unto God belongeth the Might and the Praise. This is the Day in which the Speaker (al-kalim) [Moses] announced the Glad-tidings, then the Spirit (al-ruh) [Jesus] and after him Muhammad, the Messenger of God (rasul Allah) who appeared from the Dawning-Place of the Cause (mashriq al-amr) with Respledent Soverignty (bi-sultan mubin).

Thereat did the  perfume of the All-Merciful (`arf al-rahman) diffuse scent among the regions [countries] (al-buldan) and the [eschatological] Call (al-nida') was upraised amongst the religions (al-adyan)!

Blessed then be the ear that hath hearkened [attained]

And woe be upon such as merely slumber [unaware thereof]!

He [Baha'-Allah]  is indeed the Temple (al-haykal) [? text unclear]  through the Most Greast Theophany (bi'l-zuhur al-a`zam). And He hath given all [them] good-tidings of the [eschatological] Day, the Day whereon the people shall [stand up for judgement] before the Lord of all the worlds. The Day, that is, when "thy Lord shall indeed come" or "some of the signs of thy Lord" (cf. Q. 6:158). Thus did the Beloved One (al-habib) [ Muhammad] cry out [as recorded in the Qur'an] in view of the fact that [the Archangel] Gabriel (jibra'il) gave him the Glad-tidings on the part of God, the All-Knowing, the Well-Acquainted (al-khabir).

Hearken ye unto the Call of the Glorious One (al-jalil) from the precincts of the Prison [of Acre]! He shall indeed draw thee nigh unto the place (al-maqam) wherein the Beauty of the All-Merciful did take his seat upon the Throne of the Exposition (al-bayan)! And He did summon all unto His Straight Path (sirat al-mustaqim).

At the moment do We desire that We should make mention of the names of the faithful for whom this [missive] was despatched. This such that We might give them the Glad-tidings of the Providence of God (`anayat Allah), the One who is the Goal of the Mystic knowers (maqsud al-`arifin).

Thou did indeed approach the Divine Countenance (al-wajh) after the annihilation of everything (fana' al-ashya')! And He thus makes mention of thee even though He does not guide anything among [created] things (al-ashya') unto Himself, including whatsoever stands before [worldly] kings and sovereigns (al-muluk wa'l-salatin). We heard thy call and thy petition and We made mention of thee aforetime,  just as We now make mention of the One whom God made to be the Key of the Treasury of Knowledge and Wisdom (miftah kunuz al-`ilm wa hikma) for He is One Powerful (al-muqtadir), the Mighty (al-qadir). He is indeed the One Who hath derided [ridiculed] the world aforetime and hath ornamented it with the Ornament of the Wondrous Countenance (al-wajh al-badi`) which hath shed brilliant radiance from the Horizon of the Sun of Trustworthiness (shams al-`inayat)  and Benevolence (al-altaf). So blessed then be unto the mystic knowers (al-`arifin).

Through every single letter (harf) of His verses (ayat) there hath ever been [generated] a heaven (al-sama') although it is the heaven [possessed] of suns, moons and stars about whom none can circumambulate except God [Himself], the All-Knowing, the All-Wise.  So blessed be unto thee for thou hath discovered the Perfume (`arf) which hath enraptured thy soul, even as a Pathway (sabil an) unto God, the Monarch of this Manifest Day (malik al-yawm al-mubin)!

The [true eschatological]  Judge (al-hakim) [cf. Hakim Hayyim?] hath come from the horizon of Power (al-iqtidar) with [revealed] verses (ayat), bedazzling rays, and luminous expositions, though the people remain [wrapped up] within an impenetrable veil (hijab ghalid). The Day hath indeed come and there hath appeared the radiating brilliance which was concealed in the shell [pearl] of the enigmas [clouds] of knowledge and wisdom  (sadaf `ghama'im al-`ilm wa'l-hikmat), a Cause (amr an) from God, the Help in Peril for whomsoever is in the heavens or upon the earth[s]. So be thou consumed within the Fire of the Lote-Tree of My Cause (sidrat amri) evanescent on account of the Lights of My Theophany [Manifestation] (zuhuri) and crying out about My praiseworthyness which is Beauteous (jamil).

Say: `O concourse of the earth! By God! He hath opened the Gate of Heaven!  And the King of Names (mālik al-asmā’) hath indeed come down with a Sovereignty (sultana) which cannot be withheld by the [evil doing] legions of all the worlds. Nor indeed! by the powerful influences of the nations (satwat al-umam) or by the machinations [clamour](dawda') of the `ulama' (divines). Nor indeed! by the reputations [accidental activities] of the ruling classes (a`rad al-umara') or the supplication  of all nigh the supreme horizon (al-ufq al-a`la), the locale (maqam) in which ther was upraised the Call (al-nida') that `Dominion is of the Radiant  King of this [eschatological Day!',

Thy Supreme Lord (mawla al-wara) summoneth thee on the part of God, the Mighty, the Powerful, unto that which He hath ordained for the people of Baha'. So Blessed be the tongue (al-lisan) tha hath confessed that which the Tongue of Grandeur (lisan al-`azimat) crieth out through Him in the Most Elevated Station (a`la al-maqam) and acknowledged God and in His verses which have encompassed all the horizons.  By God!  He emanates through the dust of this prison, the perfumed scent of the Bayan (Exposition), through the knowledge of the All-Merciful, that which hath ever been hidden in the [sacred] Books of God, the Lord of the elevated Pedestal (rabb al-kursi al-rafi`)!

Hearken ye then unto the Call (al-nida') yet another time from the right-hand side of the Luminous Spot (al-buq`at al-nura'), `Verily He, no God is there except Him, the Peerless (al-fard), the One (al-wahid), the Radiant (al-shami`??), the Beloved One (al-habib). Beware lest thou weaken over the croaking of the people of the Furqan or the opposition of the people of the Bayan  who have broken the covenant of God and His Testament and have disbelieved in what was sent down [revealed] on His behalf for He is indeed the All-Knowing, the All-Wise!

Mention was [previously] made of thee yet We come to mention thee again! This to the end that thou rejoice and be numbered among such as are thankful.  Take [firm] hold [then] of the Book through the power which cometh from Us and be not numbered among the patient [to observe it]. Now as for Our observing thy receptivity.  We have cast receptivity upon thee and We make mention of  thee for on this account are the eyes of the mystic knowers solaced! Should this [eschatological] Day anyone befittingly orient themselves they would indeed hearken unto the [latter day] splitting apart of everything (al-fitrat ila al-ashiya') and would heaken on this account unto that which the Supreme Pen (al-qalam al-a`la) crieth out in this respect. The All-Merciful (al-rahman) hath indeed come unto His kingdom with the signs [verses] (al-ayat) [of fulfillment]. Blessed be whomsoever hath attained thereto and woe be upon such as delay.

Have ye not heard the [eschatological] Call (al-nida') or are ye to be numbered among the heedless? He hath come about whom the Speaker (al-kalim) [Moses] cried out on the [p.4] Mystic Sinai [Mount of Gnosis] (tur al-`irfan)! There hath appeared a Pathway (sabil an) unto Him  through the sea [ocean] (cf. Exodus 15:14, 23; Hebrews 11:29, etc) and [thereby] salvation from Pharoah and his hosts. Thy Lord is indeed the One Powerful, the Victorious, the Almighty. Blessed be whomsoever casteth aside [opposeth] their idle fancies!  (al-awham) and turneth unto the Most Transcendent Horizon (al-ufq al-a`la) with a luminous countenance. So cast ye aside whatsoever is of the people on this Day in which the world hath been ennobled with the breaths of divine inspiration (nahafat al-wahy)! Then Blessed be whomsoever hath attained and uttered, `Unto thee be praise! O Thou who art the Desire of all the worlds (maqsud al-`alamin)'!

We observed thy name and thus mention thee for We have heard thy petition and We respond unto thee through the verses of God, the Help in Peril, the Self-Subsisting. Say: `O my God! O my God!