The opening lines of the Dawn Prayer of Muhammad al-Baqir.

for all Thy Splendor (bahā') is truly resplendent (bahiyy).

I, verily, O my God! beseech Thee by the fullness of Thy Splendor (bahā').

The prayer cited above and fully translated and commented upon elsewhere on this website, is ascribed to the fifth Imam Muhammad al-Bāqir (d. c.126/743) and exists in several versions. The text can be found in numerous Twelver Shi`i devotional compilations often in sections dedicated to the Ramaḍān period. Perhaps its most famous printing is in the Mafatīḥ al-Jinān ("Keys of the Paradises") a very large (795 pages + indexes) devotional compilation by  the twelver Shī`ī scholar Shaykh `Abbās al-Qummī (d. 1319/1901). In various of the numerous editions and printings of this book the Du`ā' al-Saḥar  is referred to and indexed as the  Du`ā' al-Bahā' (lit. `The Supplication of Splendor-Glory-Beauty'). In introducing this supplication al-Qummī writes, outlining the pious actions to be carried out during Ramaḍān period,

Different versions of the Du`ā' al-Saḥar/Du`ā' al-Bahā'   are footnoted by al-Qummi in his Mafatih al-Jinan. He writes: "We are found a transmission from [Imam Ja`far] al-Sadiq [d.c. 148/765] in the Du`ā' yawm al-Mubahalah ["Supplication for the Day of Mutual Execration] which differs from the above [printed text]. Note also the differences between the recension (nakhsh) of the Shaykh [al-Ṭā`ifa = Abu Ja`far Muhammad ibn Ḥasan al-Ṭūsī (d. 460/1067)] and the recension (nakhsh) of the Sayyid [Add] (p.221 fn.1). These two aforementioned Shi`i authorites, al-Ṭūsī and al-Sayyid [ADD] then cite somewhat different versions of the Du`ā' al-Saḥar/Du`ā' al-Bahā'. The naskh of the Sayyid is probably that contained in the مصباح المتهجد  Misbāḥ al-Mutahijjad [al-Kabir] ("The [Greater] Lamp of the Nightly Vigil") of  al-Ṭūsī....

The Du`ā' al-Saḥar is recited by Shi`i Muslims at dawn times during the fasting month of Ramaḍān. This amazing prayer was very precious to the Bab who quoted or re-revealed it numerous times in his Kitab-i Panj Sha`n (Book of the Five Grades) and Kitab al-asma’ (Book of Names). His naming of the months of the Babi-Bahā'ī year is closely related to various of the divine attributes found within this and related versions of the Dawn Prayer.

The first line of the Dawn Prayer of Muhammad al-Baqir (see above), contains no less than five terms derived from the same triliteral root from which the verbal noun bahā'  and the superlative abhà (all-glorious) is derived, including bahiyy (= `resplendent', `radiant', `glorious', `luminous', etc.). Bahā'-Allāh drew attention to this in a number of his Arabic and Persian scriptural Tablets.

Examples of Babi-Baha'i basmala openings drawing upon the Du`a al-Sahar.

The Bab changed the Islamic basmala from bismi'llah al-rahman al-rahim, “In the name of God the Merciful the Compassionate” to “bi-ism Allah, al-amna` al-aqdas,” "In the name of God, the Inaccessible, the Most Holy.”  Baha Allah, likewise, thousands of times, recreated and refashioned the basmala at the commencement of his scriptural Tablets.  Many of these new basmala openings are influenced by  the opening words of the Shi’i Ramadan Dawn Prayer, incorporating the words Baha' /al-Baha' (glory, splendor…), Bahiyy /al-bahiyy (splendid, luminous, glorious...), and Abha /al-abha  (All-Glorious, Most splendid, etc.). This sometimes  in line with the original baha' related Dawn Prayer opening.

One of the most important printed volumes of scriptural Tablets of Baha'-Allah is that complied from writings addressed to the Shaykhi, Babi and Baha'i background disciple  Muhammad Kázim Qazvini or Shaykh Kazim Samandar (d. Qazvin, 1918) as well as certain of his relatives. Entitled Ayat-i bayyinat ... , this compilation of Arabic and Persian writings, includes texts with a number of basmala and other passages within short epistles of considerable interest. One such  four or so page Arabic Tablet ( no. 12) contained within in the Ayat-i bayyinat (pp.10-13) is a letter or "book" of Baha-Allah which commences ( like many others) with an echo of the Shi`i Ramadan Dawn Prayer  :

This is a letter from the Primal Point (nuqtat al-ulya) and His Baha' (Splendor-Glory...) unto he who was named in the Empyrean of Names (jabarut al-asma') as [Muhammad] Kazim [Samandar]. He was indeed reckoned one of those written down in the Archetype [Mother] of the scriptural Tablets (umm al-alwah) by the Pen of the Cause (qalam al-amr) as one of the believers. O Kazim! The breezes of holiness of  the  Mighty, All-Enduring Dove (varqa') repeatedly maketh mention of thee in wondrous Arabic melodies.

We have already noted that Bahā'-Allāh several times specifically commented upon the Arabic Ramadan dawn prayer. He frequently cited or alluded to it. We again give a few examples from passages within his Tablets addressed to Samandar. There exists, for example,  writings in which sections of the first line of the Ramadan Dawn Prayer are quoted or refashioned. Referring to Samandar in one Tablet Baha’u’llah states:

Another slightly variant example is found within a section of  text extant within a ms. Tablet of Baha'u'llah to Hadrat-i ism-i Zayn [al-Muqarrabin] dated 18th Dhu'l-Hijjah 1300 (=18th October 1883 CE):

In many of his Arabic and Persian scriptural Tablets (alwāḥ) Bahā’-Allāh  cites or partially cites the opening lines of the Ramadan Du`a al-Sahar. He often draws on or utilizes its phraseology or terminology in benedictions upon Babi-Bahā'i persons. In an untitled  Persian Tablet  headed  `He is the Powerful,  the Transcendent, the Sanctified, the Exalted, the All-Glorious', a benediction is uttered upon the young Bahā'i martyr Āqā Buzūrg-i Khurasānī (executed 1871 CE) who was entitled Badī` ("Wonderful") the Du`a al-sahar is cited though slightly modified as a phrase (the 2nd person suffix and the bi are  omitted)  `alay-hu min kull bahā' abha-hu   ("upon him be all the Bahā' at its Most Splendid (abhā).

An untitled Arabic prayer of Bahá'u'lláh

There exists an Arabic prayer of Bahá'u'lláh -- headed "In the name of God, the All-Glorious (al-Abhá)"  -- which opens with reference to the Shí`í Dawn Prayer,  the first line of which it subsequently quotes. By means of this Dawn Prayer,  God had been supplicated, Bahá'u'lláh meditates, by the tongue of His Messengers (rusul),  beseeched through the "tongues of those who are nigh unto God". All, in fact, were commanded to recite it at dawntimes for it contains the "Greatest Name"  and is a protection against being veiled from that Name (Bahá') which is the "ornament" of God's "Self". (see AQA, Majmú`a-yi munáját  45-46). [22] 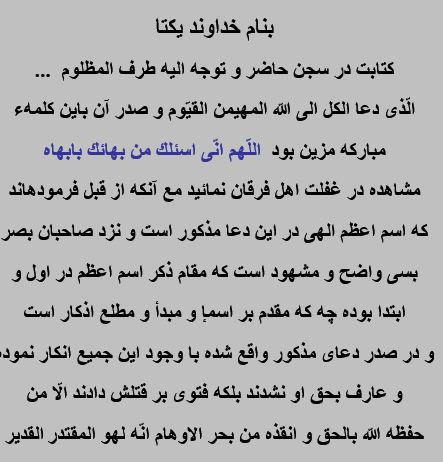 In a Persian Tablet to Mírzá `Abbás of Astarábád sometimes referred to as the Lawh ism-i-a`zam  ("Tablet of the Greatest Name").  Bahá'u'lláh quotes from the beginning of the Ramadan Dawn Prayer  and observes that the  "people of al-Furqán" (= Muslims) have not heeded the fact that the "greatest name" was said to be contained within it; indeed, at its very beginning! (refer Má'idá 4:22-23 cf. ibid, 7:97). [22]

In a Persian Tablet to Mīrzā `Abbās of Astarābād sometimes referred to as the Lawḥ  ism-i-a`zam, "Tablet of the Greatest Name", Bahā’-Allāh quotes from the beginning of the above quoted Dawn Prayer and observes that the  "people of al-Furqān" (= Muslims) have not heeded the fact that the "greatest name" was said to be contained within it; indeed, at its very beginning! (refer Mā’ida 4:22-23 cf. Mā’ida 7:97).

In the Name of God, the One.

Thy letter arrived in the [Acre/`Akka'] Prison and the gaze of the Wronged One (al-maẓlūm = Bahā’u’llāh) who summoneth all unto God, the Help in Peril, the Self-Subsisting was directed unto it. The commencement (ṣadr) of that [communication] was ornamented with this blessed phrase (kalimat-i mubāraka),

“I, verily, O my God, beseech Thee through Thy Bahā’ (Splendour) at its Most Resplendent (bi-abhā-hu)…”.

Thou art aware of the perfidy of the people of the Criterion (ahl al-furqān) [=Qur’ān = Muslims] despite the fact that they [certain of the Imams] indicated that the Greatest Name of God (ism-i a`ẓam-i ilāhī) is mentioned in this [Ramaḍan fasting] Supplication (du`ā) [of Imam Muhammad al-Bāqir]. And it is abundantly clear and evident on the part of the possessors of insight (ṣaḥibān-i baṣar) that the position (maqām) of the mention [in the Du`ā] of the Greatest Name (ism-i a`ẓam) is at its very opening or commencement. This since it has preeminence (muqaddam) over the [other Divine] Names (asmā’) and is the genesis (mubdā’) and dawning-point (maṭlā) of the [other] commemorative lines [of the Supplication] (adhkar) being mentioned and positioned at the very inception (ṣadr) of the Supplication (du`ā).  In spite then of this all repudiated it and remained unaware of its Truth.  Nay indeed! They [the Shī`ī] ulamā’ issued a fatwā for his [Bahā’u’llah’s] execution, save, that is, such as were, in very Truth, safeguarded by God and rescued from the ocean of idle fancies.  He [God] indeed is assuredly the Powerful, the Potent.

An untitled Tablet of Bahā'-Allāh identifying and celebrating the word Bahā' in the Du`ā al-saḥar with himself as the ism al-a`zamm the Greatest Name of God.

In My Name through which the Light of Exposition (nūr al-bayān) hath radiated forth from the Horizon of Possibility (ufq al-imkān).

O Thou who gazest towards the Countenance and are one mentioned before the Throne! Today  the Tongue of the Proof  in the Kingdom of Exposition (malakūt al-bayān) giveth utterance to this Elevated, Blessed, Word (kalimat-i mubāraka-i `ulyā') :

"O my God! I beseech Thee by Thy Bahā' (Splendor) at its most Splendid (abhā') for all Thy Splendor (bahā') is truly resplendent (bahiyy)..."

This is the Greatest Name of God (ism Allāh al-a`ẓam) which was announced by the proof of God (hujjat Allāh) and His evidence [the messianic Imam]. By My Life! There hath not appeared  either any mention (dhikr) nor any evidence (bayān) more lucid (aṣraḥ) than this. Blessed then be such demand justice (ṭubā li'l-munṣifiyyin)! This is a Name through which the limbs of the unbelievers (farā'iṣ al-mushrikīn) hath been made to quake and whereby the hearts of those who are nigh unto God (afida al-muqarrabīn) hath been made tranqil. So draw ye nigh and say: `The Kingdom and the Kingdom of God (al-mulk wa'l-malakūt) are in the grasp of the power of God, the Lord of all the worlds! He it is whom the [ military] ranks (al-ṣufūf) cannot hold back nor the powers of the hosts of the world (junūd al-`alam) overpower him. He doeth whatsoever He willeth and ordaineth whatsoever He pleaseth for He is One Mighty, Praiseworthy"  (trans. Lambden from Behmardi, ed. La`ali-yi Ḥikmah II:183).

The above cited and translated scriptural Tablet of Baha'-Allah, clearly identifies the words relating to the Arabic root of baha' in the Dawn Prayer, with the Mightiest or Greatest Name of God (ism Allāh al-a`ẓam).

In his last major work of compilation, The Epistle to the Son of the Wolf , Bahā’-Allāh refers to the Shi`i Ramadan Dawn Prayer. He exhorts Shaykh Muhammad Taqī Najafī (d.1914), should he enter the "Crimson Ark" (become a Bahā'ī), to face the "Ka`ba of God" (Bahā’-Allāh) and recite the opening line of the Shī'ī dawn prayer. Were this to be carried out, He promises him, even the "doors of the Kingdom" would be "flung wide" open before the face of the "son of the Wolf". This anti-Bahā'ī cleric did not read this prayer as directed; he never became a Bahā'ī.