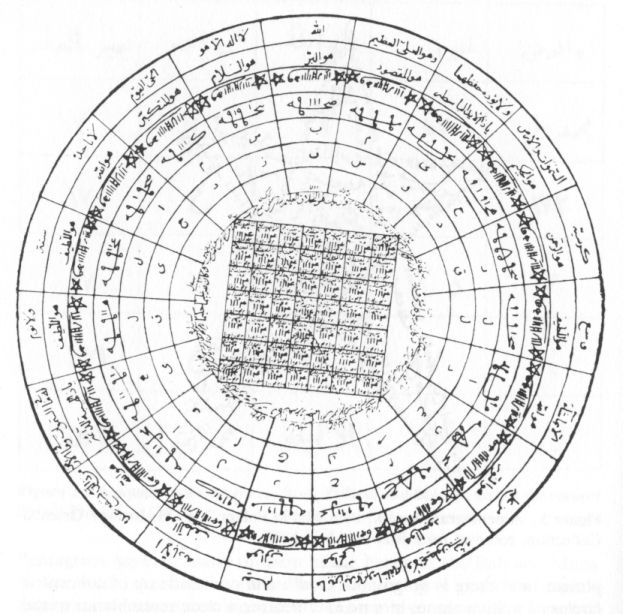 A talismanic da'ira (circle) in the hand of the Bab, the third circular segment or division of which contains nineteen repetitions of the Shi`i graphical form of the mightiest or greatest Name of God ascribed in poetical form to Imam Ali ibn Abi Talib (d. 40/661). Penned in gold ink, this example,  was presented in Cyprus in 1896 to the British orientalist Edward G. Browne (d. 1926) by Mirza Yahya Nuri (d. Famagusta, Cyprus, 1912), the half-brother of Baha'-Allah, the former known among some through the title  Subh-i Azal ("the Morn of Eternity"). It is Item B.6 in Folder 3 of the Browne Collection of Babi books and mss., located in the `Oriental Collection' held in Cambridge University Library. Reproduced from Denis MacEoin (1994) Rituals in Babism and Baha'ism (London, UK: British Academic Press/ I.B. Tauris and Co. Ltd.,  + Centre of Middle Eastern Studies, University of Cambridge, 1994), p. 22

Eightfold Imami Shi`i form of the al-ism al-a`zam flanked by two pentalphas ( ✩ ), the `Mightiest Name of God' repeated nineteen times in the above talismanic da'ira (circle) in the hand of the Bab himself.

As in pre-Babi Islamic talismanry, gnosis and `ulum al-ghayb (esoteric sciences), amulets and talismans were inscribed or written upon all manner of materials or substances; including types of paper and gemstones  such as those of making up  jewelry and rings  as well as  on so-called magic bowls, etc. Circular talismanic devices were called da'ira ("Circles", pl. dawa'ir) while those written within pentadic or in the shape of a five-pointed star, were designated haykal (`temple', humanoid shape), the plural being Arabic hayakil, lit. `temples', etc).