Born a Shī`ī Muslim in Shiraz in 1819, the youthful, revolutionary generator of a new, neo-Shī`ī religion designated al-Dīn al-Sāfi (`The Pristine Religion’) in his Qayyūm al-asmā’ (and commonly designated Bābism), was named Sayyid `Alī Muhammad Shirazi, the Bāb (1819-1892). He wrote a great deal in Arabic and  Persian and made liberal use of the basmala which he also came to recreate or reformulate in various ways. 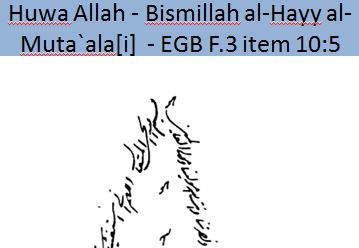 “That which constitutes this [initial] verse (al-āyat) [of the Bayan, stands] in [replacement of the standard Qur'anic, Islamic] basmala [namely]

("In the Name of God, the Most Inaccessible, the Most Holy").

This  [section concerns] whatsoever was revealed therein [the Bayān] is in  the first [initial] verse [of the Bayān] (al-āyat al-awwalī) namely,  بسم الله الامنع الاقدس  Bism Allāh al-amna` al-aqdas ("In the Name of God, the Most Inaccessible, the Most Holy"). Thou should thus direct thy gaze towards the [19] `Letters of the Unity' (ḥurūf al-wāḥid).

The first basmala in the KPS.

At KPS 1.2 (p.15) we have (as above) the same neo-basmala as at the beginning followed by Bismillah al-arfa al-arfa, "In the Name of God, the Uppermost, the Uppermost".

The first basmala at KPS III.1(p. 68) is written for the leading Babi   مرزا أسد الله‎ = Mirza Assad-Allah Khu`I known as Dayyān and reads:  بسم الله الاءِحد الاءِحد Bismillah al-a’ihad al-a’ihad (from the root a-h-d connoting oneness)  "In the Name of God, the Supremely One, the Supremely One". Here we have the superlative form of the Arabic word for "one" used as a Name of God denoting some form of ultra or supreme oneness. Add

The 5th Persian section of the Kitab-i Panj Sha’n (VII.5) includes a twice repeated superlative form of the root j-m-l- connoting beauty : Bism’llah al-ajmal al-ajmal, In the Name of God, the Most Beautiful, the Most Beautiful (see image above).

The very late book of the Bab entitled Haykal al-dīn (The Temple of Religion) commences with the Ya Huwa (O He!) and then al-wahid al-awwal (The first Wahid "Unity") which is followed by the new basmala of the Bab spelled out in the Persian Bayan :  Bismillah al-amna` al-aqdas. "In the Name of God the Most Inaccessible, the Most Holy". The second "Unity" of the Haykal al-Din also commences, Huwa – Bismillah al-amna al-aqdas and has the address "O letter of R and B" indicating al-Rabb meaning  Lord!).

In the Haykal al-Din each Unity usually commences with the Huwa or an address thereto, an address to the personal pronoun indicative of the Divine Self-Identity, the Ipseity (huwiyya), Ya Hu / Huwa. “O He!” though this may be (text not always clear) bi-'llah "in God". Each unity is also often prefixed with Ya Allah (O God!).  In Haykal al-Din III-VII we have Ya Allah! (O God!). These invocations are followed by the new basmala of the Bab as set down  in the Persian and Arabic Bayans Bismi’llah al-amna’ al-aqdas… This new basmala occurs at the commencement of Haykal al-Din [I]  II-VIII + X and XI but not before IX which has no basmala only the Ya Huwa (O He!") followed by the words, "I verily amd indeed God! No God is there except I myself! The Supreme Sovereign (aslat), The Supreme Sovereign (al-aslat).

The Bab’s Tafsir on select verses of his Haykal al-Din must be one of his very latest writings probably dating to late June or early July 1850. It has the Basmala : “In the Name of God the Knowing, the Master of the Dual Signs (Dhu’l-`Alamayn / `Alamin”).

The neo-basmala formulations in the Kitab-i panj sha`n (The Book of the Five Modes [of Revelation) of the Bab.

The Kitāb-i Panj Sha`n (= KPS) (The Book of the Five Modes [or Grades]) is a fairly lengthy major work of the Bāb largely written largely in Arabic but with some (heavily Arabized) Persian sections making up 1/5th of the work. It is a very rich work existing in a large number of ms. copies dating from the 1850s. Its subject matter is representative of the last phrase of the thought and meditative devotional style of the Bāb.

The KPS contains very many basmala recreations many of which are heterodox if not heretical or extremely ghuluww by traditional Islamic norms or standards. Its first revelatory pentad (Pentad I.  KPS:1ff.) may be addressed to or for  the Bābī messiah figure man yuẓhiru-hu Allah (““Him whom God shall make manifest”), who was regarded by the Bab as a Divine Being. On account of his eschatological (subordinate) Deity it opens with lines containing the superlative of Allāh (A’llāh) and several other neologisms formed from the personal name of God, Allāh:

This opening pentad repeats this initial basmala twice and then follows this with a third basmala which reads as follows:

This is an extremely bold way of commencing a Book; with three bold neo-basmala formulas which wholly transcent Islamic norms. The Bāb would seem to be underlining the post-Islamic nature of his new religion and/or that of the Bābī messiah man yuẓhiru-hu Allāh.  On one level it is not suprising that the youth of Shiraz was