(THE TABLET OF THE VEIL)

Epistle to Baha'-Allah to the Kirmani Shaykhi leader

Hajjī Mīrzā Muhammad Karīm Khān Kirmānī (1810-1871) came to be regarded by a proportion of the Shaykhī admirers or followers of Shaykh Aḥmad al-Ahsā'ī (d. 1243/1826) and his successor, the second Shaykhī leader Sayyid Kazim Rashtī  (who died intestate on the last day of 1843 or first day of 1844 / 9th Dhu'l-Hijja 1259) and who did not become Bābīs,  as the first Kirmani (or third) Shaykhi leader. The Lawḥ-i Qinā'  (`Tablet of the Veil’) of Bahā’-Allāh is primarily addressed to this polymathic and polemical opponent of the Bābī‑ Bahā’ī religions, the Kirmani Shaykhī leader Hajji Mirza Muhammad Karīm Khān Kirmānī (d.1871). The important text was most probably written sometime between c.1869‑and 1872 CE.

The text of the Lawḥ-i Qinā' has been printed several times, most importantly in Majmu`a-yi alwāḥ i mubāraka (see PDf above).   It opens with a neo-basmala with follows with an address to the first Kirmani Shaykhi leader - the third after Shaykh Ahmad (d. 1826) and Sayyid Kazim Rashti (d.1843) - Hajjī Mīrzā Muhammad Karīm Khān Kirmānī (1810-1871).

Mss and printed texts of the Arabic and Persian scriptural `Tablet of the Veil' can be located in, for example,

The opening words of the Lawḥ-i qinā' (The Tablet of the Veil):

In the Name of God, the All-Knowing, the All-Wise.

O thou [Karīm Khān Kirmānī]  who hath a reputation for knowledge but is actually one standing at the brink of the abyss of ignorance. We have heard that thou became acquainted with the Truth-True One (al-haqq) [the Bab] yet turned aside from one of His beloved ones [= Quddus] who delivered unto thee a Noble Communication  (kitab an karim an) [a letter of the Bab] in order to facilitate thy guidance unto God, thy Lord and the Lord of  all the worlds. Thou turned aside from him and followed after the pathways of the ignorant ones (al-jahilin).

The Lawḥ-i Qinā' concludes as follows with reference to a complex work of Shaykh Ahmad which was previously brought to him in Iraq (between 1953 and 1863) by a certain Mirza Husayn Qummi and on which he had declined to write a tafsir or commentary. 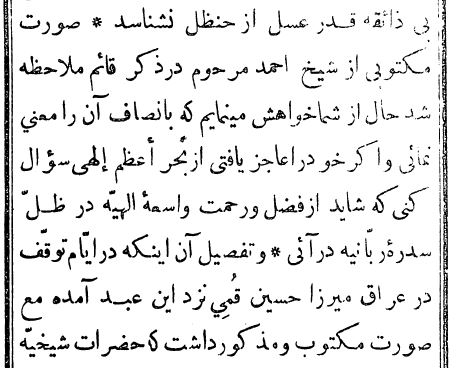 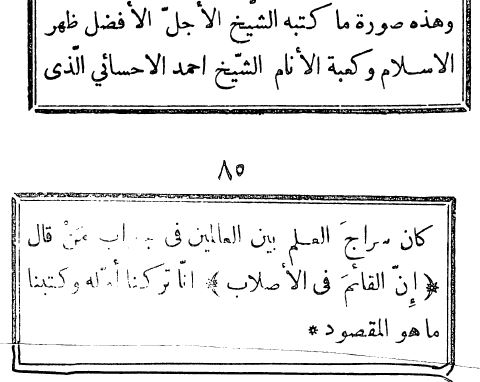 In the Lawḥ-i Qinā' , Bahā’-Allāh  also cites and comments upon a reply by Shaykh Aḥmad to a question about the phrase "the Qā'im exists in the loins" written in 1783 CE. In this treatise of al-Ahsa'i, makes reference to the sirr al‑tankīs ("Mystery of the [Great] Reversal") li‑ramz al‑ra`īs ("by means of the enigma of the Ruler" and will be translated and commented upon below. This appendid section  as printed in Iqtidárát wa Chand Lawh-i-Digar,  pp. 210-212 (see also the parallel in Majmu`a alwah-i Mubaraka MAM: 85-86) commences (with an Islamic basmala)  and ends as reproduced below: 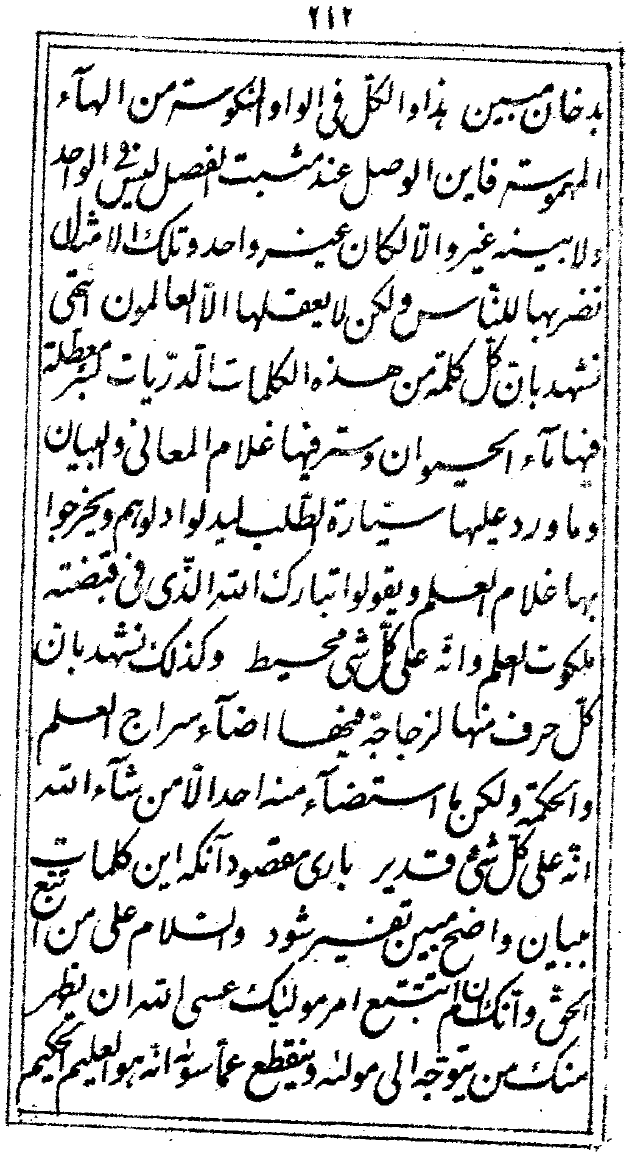 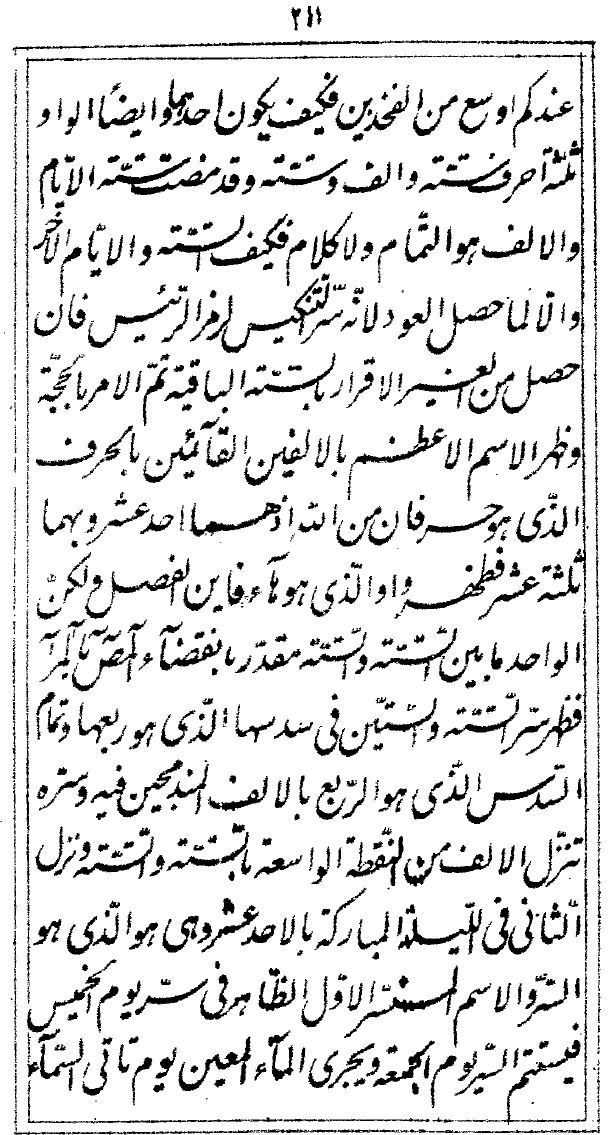 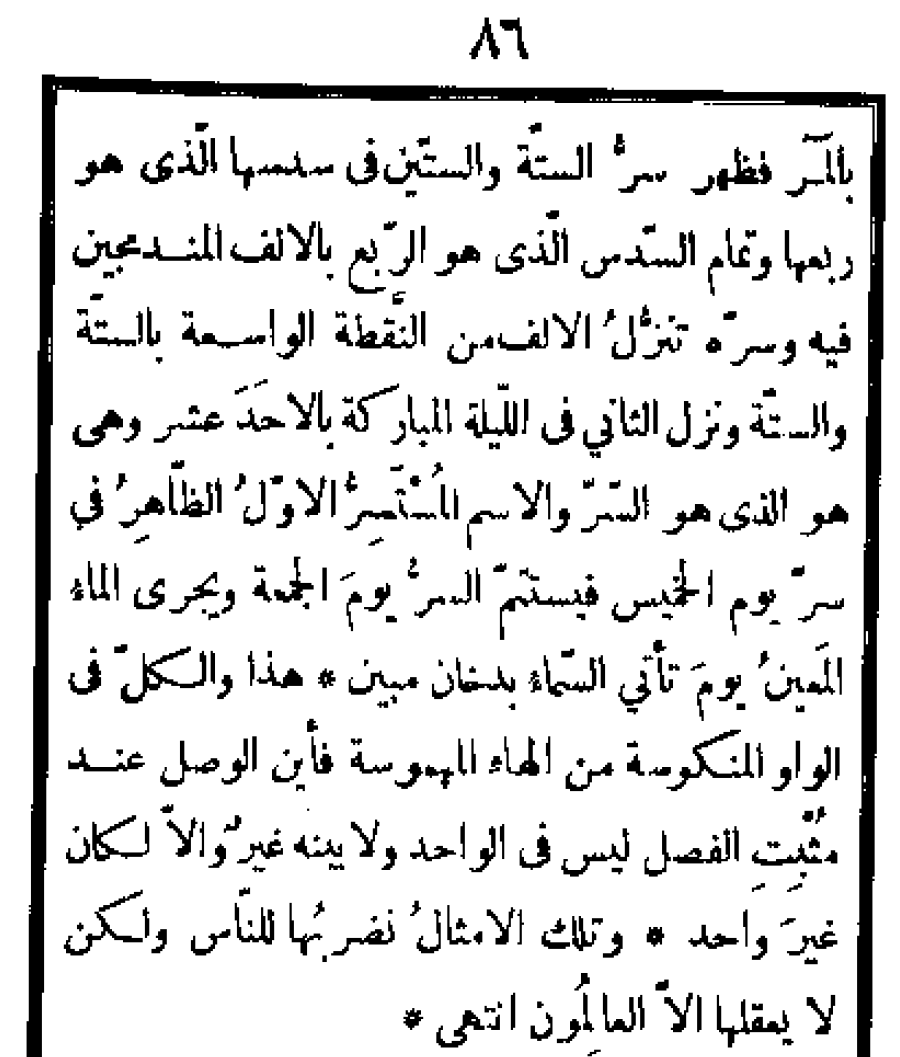 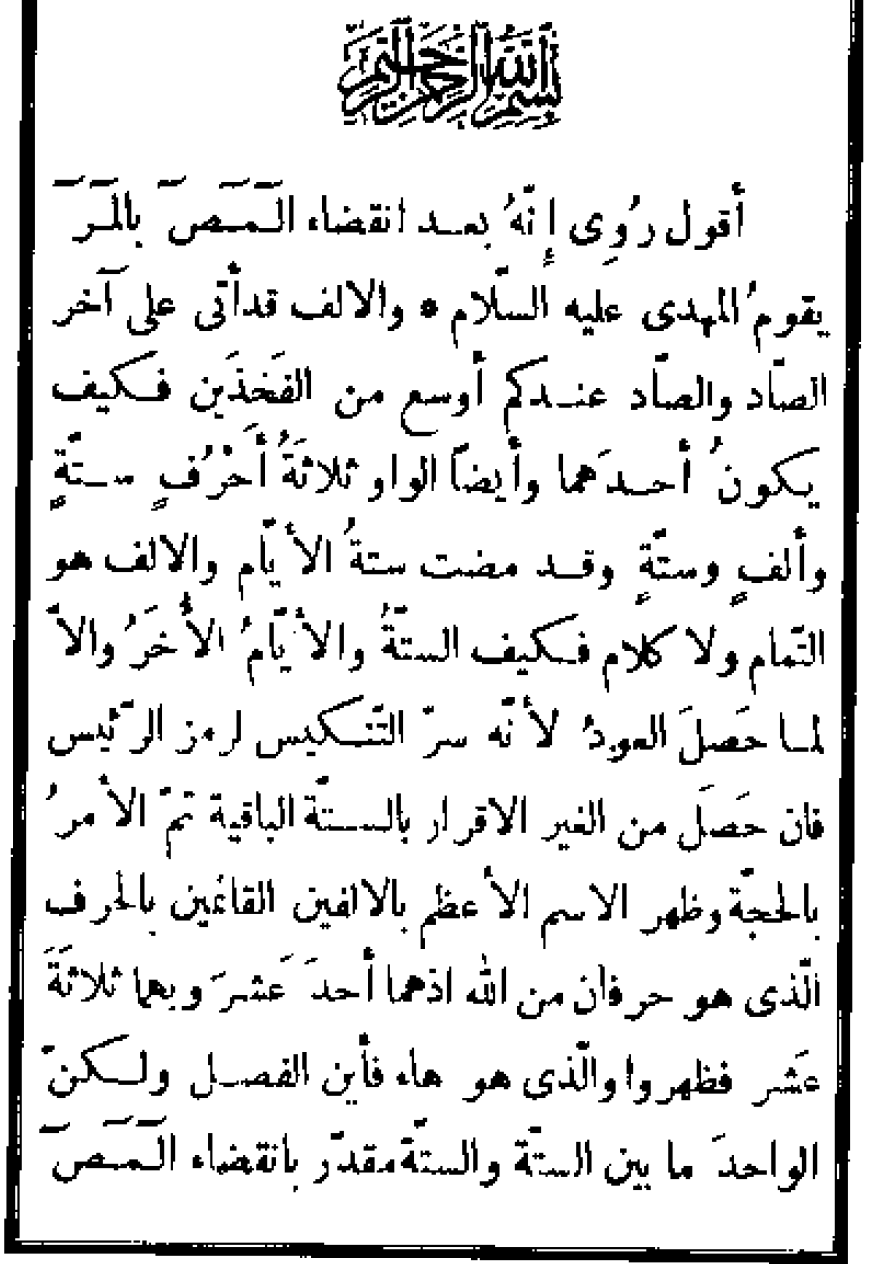 Text and Translation of the Shaykh Ahmad al-Ahsa'i passage continued

The import is that] six "days" have undoubtedly transpired and the [letter] alif  (Arabic "A") is the completion (al‑tammām) [of the awaited period] such that no [further] word need be uttered! What though is [indicated by] the [second] six (= w)? It is the other [subsequent] "days" (al‑ayyām al‑ukhra). Otherwise, why was there evident a repetition ["return" of the w] (al‑`awd)? Such assuredly resulted through

the mystery of inversion (sirr al-tankis)

on account of the symbol of the Ruler (li‑ramz al‑ra`īs).

"I omit several very abstruse lines here of the text of the Risāla al‑Rastiyya as cited by Bahā’u’llāh. He continues,  among other things, to indicate that the omitted sentences relate to aspects of the relationship between the numbers 6 and 60 and the letter "A". This passage of Bahā’u’llāh‑Shaykjh Aḥmad concludes after a few further untranslated senmtences (see MAM:87; cf. MacEoin, 1982 [94]:147).

Everything of the foregoing is [indicated] in the [letter] wāw (w) which is upturned [inverted] from the [letter] "H" which is   (al‑mankūsa min al‑hā’)...

A Note on the al-waw

Here Shaykh Aḥmad appears to indicate that the Qā'im (= the alif or letter "A") will appear at the end of the era or cycle of the six days of creation as their ultimate goal or completion. This is the era of the six "days" or religious cycles commencing "creation". They have been understood to signify the prophetic missions of the often six, and variously identified, pre-Islamic prophets "endowed with constancy" (ulū al-`azm cf. Qur'ān 46:34; namely,

It may also be that the final letter "W" (wāw) (of ) or the "(other) six" has to do with the `other days' or era of the eschatological  "return" (raj`ah);  hence the inverted backward stretching "W" (wāw) in the graphic form of the "greatest name of God" representation (see above) The eschatological "return" (raj`a) of past peoples is alluded to. Such at least may be something of the meaning of al‑Aḥsā'ī.

A Further Note on the Bahā'ī interpretations of the sirr al-tankīs, 'The Mystery of Reversal"

Bahā'ī interpretations of the sirr al-tankīs to some extent draw on, though they often go beyond, those which appear to have been envisaged by Shaykh ... 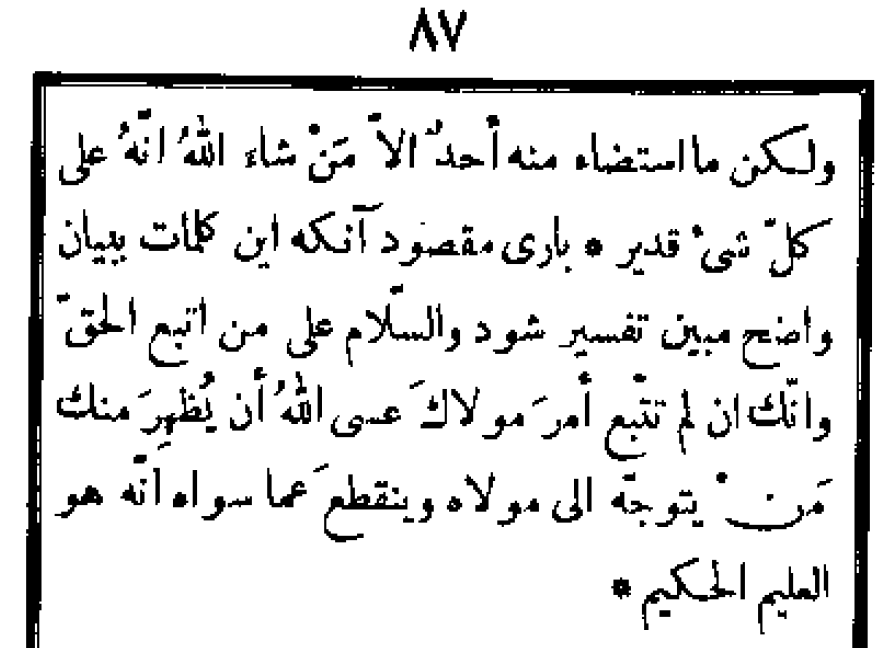 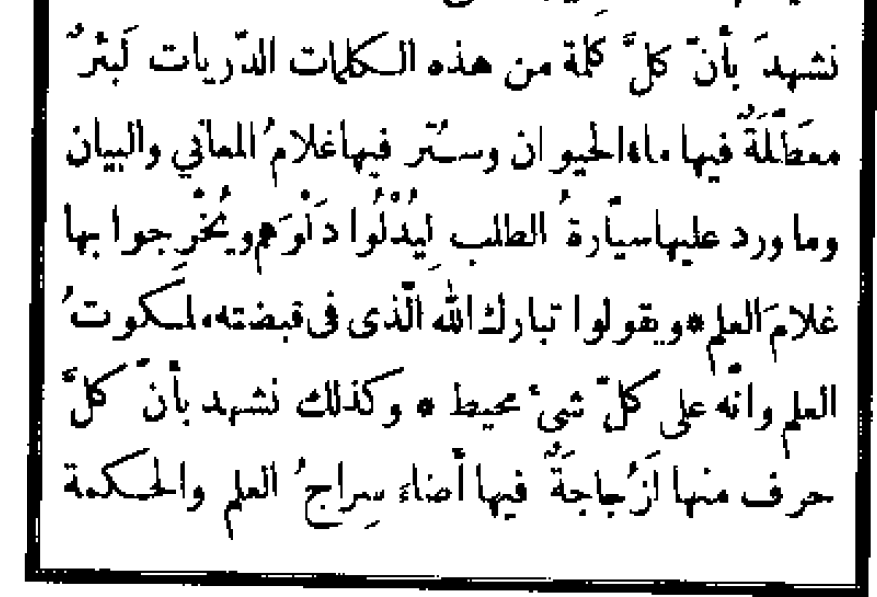 Typed text of the final Arabic-Persian paragraphs of Baha'u'llah:

We testify that every one of these words (kalimat) [of Shaykh Ahmad al-Ahsa'i from the Risala Rashtiyya] are precious pearls (al-durriyyat)...     within then is the water of life (ma' al-hayat). Concealed-veiled therein is the Youth of Mystic meaning and Exposition (ghulam al-ma`ani wa'l-bayan). No seeking wayfarer (sayyarat al-talab) can possibly attain thereto unless they dig especially deep into the well of their enquiry and enable to emerge therefrom the Youth of Knowledge (ghulam al-`ilm). Then shall they exclaim: "Blessed be God! for in His grasp is the very Kingdom of  Gnosis [Knowledge] (malakut al-`ilm). He is indeed the One All-Encompassing (al-muhit) of all things [everything[ (kull shay')!

Wherefore do We [again] testify that every letter of this treatise [of Shaykh Ahmad] is assuredly a Glass (la-zujaja) [cf. Q.24:35] from which radiateth forth the Lamp of Knowledge and Wisdom (siraj al-`ilm wa'l-hikmat) ...  ...