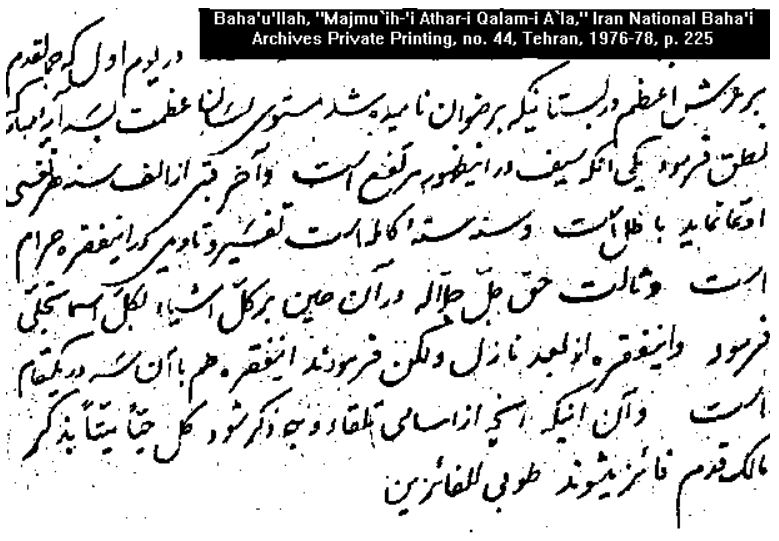 Baha'-Allah himself on his Ridwan declaration, extract from a Persian Tablet dated

Originally Posted on Tarjuman in the 1990s. Slightly Revised and under further revision, April 2015.

A while back Juan Cole and more recently Chris Buck asked me to post that extract from the unpublished Persian Tablet of Baha'u'llah-Khadimu'llah which speaks of the Ridvan declaration of Baha'u'llah. Please excuse the delay. What follows is my provisional translation of the paragraph of interest -- the highly Arabized Persian original text is from the manuscript photostatically reproduced in INBMC 44:225 (see above), .

Extract from a Tablet of Baha'u'llah-Khadimu'llah.

"On the first day that the Ancient Beauty [Baha'u'llah] occupied the Most Great Throne in a Garden (an orchard; bustan) which hath been designated Ridvan, the Tongue of Grandeur uttered three blessed verses. [1] The first of them was that in this [Baha'i] Manifestation [Dispensation, Theophany] (zuhúr) the [use of the] sword (sayf) [in holy war] is put aside (murtafi`). [2] Secondly, prior to the completion of a millennium (1,000 years) any [theophanological] claim put forward (iddi'a) by any person must be considered baseless (batil). In this respect the year should be considered a complete [standard]  ( kámil) year; both exegesis (tafsir) and eisegesis (ta`wil) are, in this respect,  forbidden. [3] Thirdly, the True One, exalted be His Glory, at that time [the Ridvan declaration] manifested (tajalli) all the Divine Names upon all things.
And the following choice verse (fiqra) was subsequently revealed but has been ordained to be of the same rank (maqam) as the preceding three [declarative verses]; namely, whatever personal designations (lit. `names', asami = individual persons) are mentioned before the Face [of Baha'u'llah], whether living or dead, such have thereby attained [the Presence of God [Baha'u'llah] by virtue of being mentioned by the King of Pre-Existence (málik al-qidam = Baha'u'llah)." (revised trans. April  30th 2015).

The first three Ridvan declarative utterances are all repeated in the Kitab-i Aqdas. They are all related to the realization of unity and peace. What was said at Ridvan in 1863 was not merely a claim to be `Him Whom God shall make manifest' (this may be presupposed) but is a major shift from the divisive limitations of past religions and coirrupt religiosity.

We do indeed gaze forth from the Horizon of Gnosis (al-`irfān).

O Concourse of the Earth!

We present [in blossom] the Orchard-Rose Garden (al-bustān), for when we mounted up within it  upon the Divine Throne (al-arsh), We heard that He crieth out and he sayeth,

Rejoice ye in that the Ancient Beauty (jamāl al-qidam) hath been established upon Myself.  Then thank ye my Lord the Almighty, for this Wondrous Bounty (al-faḑl al-badī`).”

This is the Day in which the Divine Bounty hath encompassed all the nations (kull al-millal), and which the Sidrat al-Muntaha (Lote Tree beyond which there is no passing) crieth out from the Supreme Horizon [saying]:

Whoso draweth nigh and observeth, such shall attain to this Bounty, and whoso turneth aside shall be numbered among the unbelievers (al-mushrikīn) in my Manifest Book (kitābī al-mubīn).