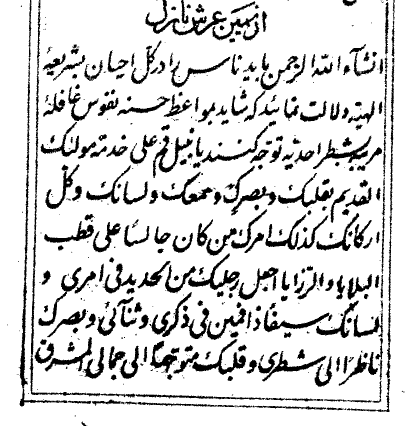 Probably dating to the early Acre period, this  untitled largely, highly Arabized  Persian Tablet of Baha'-Allah   was addressed to a certain Nabil by whom may be intended  [Mulla] Muhammad / Nabil-i  Zarandi (d. 1892 CE). It is a medium length, six or more page  Persian and Arabic scriptural Tablet of Baha'-Allah which may be addressed to this well-known Baha'i poet and historian,  Mulla Muhammad, Nabil-i Zarandi. He was the Apostle of Baha'-Allah who was  (among other things) the compiler and author of a vast collection of notes and papers pertaining to Babi-Baha'i history and apologetics,  a portion of which  in English translation was entitled The Dawn-Breakers ... by the Guardian of the Baha;i religion (1st ed. Shoghi Effendi, 1932).

The Tablet to Nabil introduced and translated here,  opens as follows (see Persian text imaged above):

From the Right-Hand side of the Divine Throne is revealed:

God, the All-Merciful, hath willed that the people ought, under all circumstances, to pay heed unto the Divine Law (shari`at-i ilahiyya) such that heedless, negligent souls re-orient themselves in the direction of goodly exhortations (mawa`id-i husna) from the Shore of the Divine Oneness (shatr-i ahadiyya).

O Nabil!  Rise up!  within thine heart, thy sight, thy hearing, thy tongue, and throughout all thy members in the service of thy Pre-Existent Master. Thus commands thee He Who is seated at the very apex of calamity  and extreme deprivation (qutb al-bala' wa'l-raziya). So  initiate thy footsteps through what is leaden [weighty iron] (min al-hadid) for the sake of My Cause! Making thy tongue even as a multi-faceted sword (sayf an) for the sake of My Remembrance and My Exaltation.

This Tablet  ends with an Arabic prayer which reads as follows: 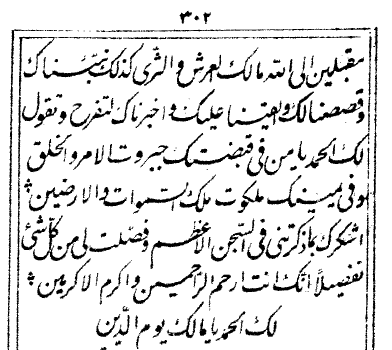 turning unto God, the King of the Heavenly Throne (malik al-`arsh)  and of the earth below. Thus have We clarified for thee, narrated for thee. have cast things forth for thee and We have We have announced unto thee something exhilirating (al-mufrih). And thou should [beseech God] saying, `Unto thee be praise O Thou in whose grasp is the Omnipotent sphere of the Cause and of the creation  (jabarut al-amr wa'l-khalq). In thy Right Hand is the Kingdom of the Dominion of the heavens and of the earth. Unto thee be praise in that Thou hast remembered me in the Most Great Prison (al-sijn al-a`zam) and hast set me apart, one separated (tafsil an), from everything. Thou art indeed the Most Merciful of those given to mercifulness and the Most Noble among such as are characterized by nobility. [Unto Thee be praise! O King of the Day of Judgement (malik yawm al-din)!

It is not certain that the last line here (in square brackets) is the rnd of this Tablet or the commencement of the next.

Select Notes and Extracts in Translation.

A fairly large number of Bahá'u'lláh's writings bear directly or indirectly upon the theme of latter-day "catastrophe". It is stated that various of his revelatory "Tablets" (alwáh), as expressions of the creative Word, are tantamount to being encapsulations of end-time, catastrophic "trumpet blasts" precipitating revolutionary "terror" and calamitous change. Certain of his major `Tablets to the Kings`, for example, were accorded suggestive qur'ánic-rooted titles by Bahá'u'lláh himself. In a Tablet to Nabíl [-i Zarandi?], he at one point dwells upon the theme of his revelations in the light of end-time "judgement" or "catastrophe" and states, 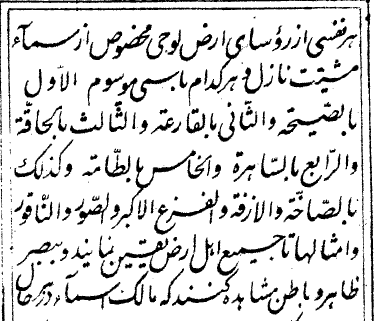 Bahá'u'lláh, Iqtidárát va chand lawh-i dígár, 298, trans. Shoghi Effendi, The Promised Day is Come (Wilmette: Bahá'í Publishing Trust, 1980) 46 . The text emboldened is Shoghi Effendi's translation with added transliteration and Qur'anic source text(s). cf. God Passes By, 212 + Per. trans. Mavaddat 425. I have supplied the transliteration and the qur'ánic references. Compare with the tablets as arranged by Bahá'u'lláh in his Súrat al-haykal, (1) Tablet to the Pope [Pius IX]; 2) Tablet to Napoleon III [2nd Tablet]; 3) = Tablet to the Czar of Russia; 4) = Tablet to Queen Victoria; 5) Tablet to Násir al-Dín Sháh; 6) Súrat al-Rá'is, etc. Later in this same tablet, Bahá'u'lláh addresses Nabíl informing him that it is his eschatological "Announcement (al-nidá)" which has caused the heavens to be "cleft asunder", the "mountains" crushed to dust and the "Great Terror" (al-faza' al-akbar, Q. 21:103) been made manifest (see Iqtidarat 300).

Nabil /Muhammad is addressed towards the beginning of this Tablet (see above) and in the following paragraph : 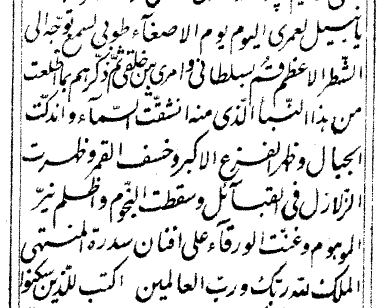 O Nabil! By My Life! This Day is the Day  for Attentiveness (yawm al-asgha'). So Blessed be the ear that hath inclined towards the Most Great Shore (al-shatr al-a`zam)! Rise ye then up through My Sovereignty and My Cause amongst My creatures. Remind them about what hath come to pass as a result of this Announcement (al-naba') for  through it heaven hath been cleft asunder, the mountains crushed to dust, and there hath appeared the "The Great Terror," (al-faza' al-akbar, Q. 21:103). The moon hath been eclipsed and there hath been made manifest the trembling of the earthquakes (al-zalazil) amidst the tribes [of the earth]! The stars hath fallen and the luminaries of idle fancy hath been darkened. At this the Dove (al-warqa') warbled forth upon the branches of the Sidrat al-Muntaha (the Lote Tree of the Extremity), pronouncing, "The Kingdom (al-mulk) belongeth to God, thy Lord and the Lord of all the worlds!".

Then Write for such as dwell