Surat al-Qalam (The Surah of the Pen)

THE SURAT AL-QALAM (SURAH OF THE PEN) 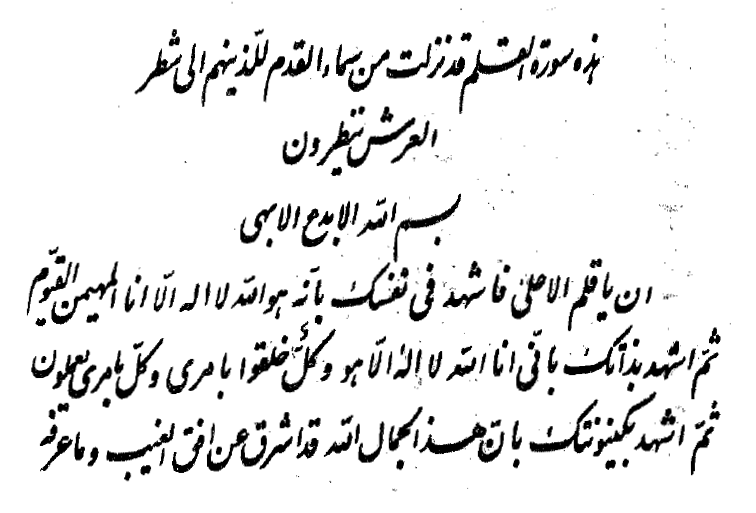 The Arabic text of the Surat al-Qalam has been printed in :

Translations of this Tablet include :

This wholly Arabic Tablet is of uncertain date although it is most  likely, from internal evidence, to be dated to the mid-late Edirne (Adrianople) period, c. 1866-8. A post 1868 Acre period dating has also been proposed by `Abd al-Hamid Ishraq Khavari in his Ganj-i shayigan, p.192 but this seems unlikely. While it opening might suggest and Acre dating (1868 onwards) it conclusion points to the Edirne period with its use of the messianic Dhikr title (if this be the correct reading).   This titled Tablet commences as follows (see the image above) :

This is the Surah of the Pen (Surat al-Qalam). It was revealed from the Heaven of Pre-Existence (sama' al-qidam) unto such as have gazed in the direction of the precincts of the Divine Throne (shatr al-`atrsh)!

The Pen referred to in these sacred texts is variously interpreted in Islamic, Babi and Baha'i Texts; the Baha'i sacred writings include several Tablets interpreting the motif of the Qalam or Pen and its qur'anic prototype. See for example, http://hurqalya.ucmerced.edu/node/70

This introductory paragraph or heading of the Surat al-Qalam (Surah of the Pen), is followed by a new Babi-Baha'i variant of the Islamic basmala (In the Name of God, the Merciful, the Compassionate), its new Babi form spelled out in the Persian Bayan and hunreds of times used after 1847 by both the Bab and Baha'-Allah has two superlatives (al-amna' + al-aqdas), being  "In the Name of God, the Most Transcendent, the Most Holy" (bismillah al-amna' al-aqdas). This new Babi basmala or neo-basmala is echoed at the begining of the Surat al-qalam which again has two superlatives (al-abda` and al-abha) :

In the Name of God, the Most Wondrous (al-abda`), the Most Glorious (al-abha).

Using another superlative al-a`la (-Most Transcendent or Supreme), Baha'-Allah next directly addresses the qalam al-a`la. the Supreme Pen!

"This is the Surat al-Qalam come to the following  conclusion

Wherefore hath the Call of this Pen (nida' al-Qalam) been completed within this Tablet through this blessed, sealed Dhikr (Remembrance)

The Surat al-Qalam  is: