What follows are largely notes in need of refining, correcting and writing up

Today I am to some degree going back to one of my first loves, biblical scholarship, which has, for me personally, evolved through and from Islamo-biblica and Babi-Baha’I Studies. I shall very largely, for lack of time (note my title), largely attempt to deal with beatitudes. After attempting to avoid muttering platitudes about beatitudes, I shall avoid depressing everyone by fulminating woes through the repetitive issuing of ancient denunciations. The data relevant to this subject is totally massive – even when cut into two. Religious or sacred literatures pertinent to the matter of woes and beatitudes span several millennia (5,000+ years BCE to CE) throughout which hundreds of variant forms of woes and beatitudes were, for a variety of reasons, cherished, pronounced or greatly feared. There are myriads of woes and beatitudes; many comforting and uplifting others depressing and fearful. Hundreds of commentaries and expositions of woes and beatitudes have been written by  Christian thinkers and other learned religionists.

I should at this point offer a few succinct and thus inadequate definitions of the beatitude and the woe :

A Beatitude (Heb. אַ֥שְֽׁרֵי `ashrī (from 'Asre) the NT Greek Μακάριοι / Makarios; Latin Beatitudo) is statement of blessedness; perhaps most notably, in religious terms, a declaration made in the so-called ‘Sermon on the Mount’ (Matthew 5:3–11) commencing in the King James (1611 CE) translation or Authorized Version, “Blessed are [pl.]” … The fifth chapter of the Gospel of Matthew contains eight or nine beatitudes (they are not the only ones in the NT), some very well known.

A Woe , in biblicl Hebrew is an onomatopoetic interjection, אוֹי, oi ) , in New Testament Greek Οὐαί which in Arabic is often rendered as وَيْلٌ wail) is a “an impassioned expression of grief and despair” (BDB). It may introduce a statement of censure, warning, malediction or judgement. The “woes” pronounced in Matthew 23 against the scribes and Pharisees parallel, in a negative way, the Beatitudes of Jesus. Woes are not uncommon in the New Testament e.g.

Beatitudes and woes have then been uttered for many millennia by religious figures, sages philosophers and other worthy or unworthy persons. Individuals have mouthed expressions of felicity (`good news’) and / or doom (`bad news’) upon individuals, groups, nations and peoples. They may constitute personal or impersonal, individual or collective calls to benediction as self-appraisement, or future action. These exclamations may have connotations of praise and beatitude or express apocalyptic judgments as terse, pithy expressions of wrath, harsh judgement, worldly woe or eschatological cursing. Some offer succinct tokens of imminent spiritual blessing and beatitude. When major world religions succeed one another pre-existing literary woes and beatitudes may be refashioned, uttered anew. They bring a new blessing and/ or a new threat; new impending woes or visions of new era beatitude. New believers receive beatitudes and new opponents solicit revoiced woes.

In Abrahamic sacred literatures messianic figures are expected, in the latter days or in eschatological times, to perform, divulge or utter expressions woeful judgement and  statements of blessed beatitude. As we shall see Jesus the Galilean founder of Christianity, Muhammad the Arabian prophet of Islam and the Persian-born Baha’u’llah all, to a greater or lesser extent, are believed to have accomplished this. The Baha’i religion being both neo-Abrahamic and neo-Islamic includes thousands of woes and beatitudes. They are almost omnipresent within its sacred literatures. Baha’u’llah uttered thousands of beatitudes and woes – thirteen beatitudes and three woes, for example, in his Kitab-i aqdas (c. 1873) – some echoing NT and/or Islamic versions, others going beyond them in articulating and underlining the new theology and theophanology in an era of fulfillment.

There are many biblical beatitudes and woes. Attention can only be given here to the select New Testament beatitudes though they have precedents in the Hebrew Bible, post-biblical literatures and texts expressive of various Judaisms. In the Hebrew Bible, certain of the NT beatitudes are thought to echo the eschatological verses of Isaiah 61:1-3 about the `Exaltion of the Afflicted’ and cf. negative side transcended as in Proverbs 6:16-19, listing the seven things the Lord hates.

In Hebrew, one of the words expressing blessedness is the biblical Hebrew  אַ֥שְֽׁרֵי    ashrī  meaning `to go straight on, pronounce happy or blessed. This is evidenced in  Psalm 1 which commences :

[1] Blessed (Heb. אַ֥שְֽׁרֵי    ashrī ) is the man that walketh not in the counsel of the ungodly, nor standeth in the way of sinners, nor sitteth in the seat of the scornful. [2] But his delight is in the law of the LORD; and in his law doth he meditate day and night…”

Among the thousands post-biblical texts representative of forms of early Judaism are the Qumran texts (or loosely, the so-called) `Dead Sea Scrolls’. Included here is a text known to modern scroll experts as 4Q `Beatitudes 4Q525’ where the Hebrew  `ashre (Blessed) is several times found. Vermes in note on `Beatitudes 4Q525’ in The Complete Dead Sea Scrolls (Allen Lane: The Penguin Press, 1997 pp. 414-5) writes, “The title given to this piece of Wisdom poetry derives from the repeated use of ‘Blessed’ (‘ashre) modelled on Ps. I, 1, and recalling the Beatitudes of the New Testament (Matt v, 3-11). “

It has been observed that “the style of speech, beginning with Happy are you or Blessed was a common teaching method employed by Jewish teachers in and around the time of Jesus”.

A cursory examination of the NT indicates that Jesus, the founder of Christianity (c. 6 BCE-c.33 CE), uttered both end-time, realized eschatological beatitudes and woeful castigations or judgements. Among the best known logion or sayings attributed to Jesus, the Galilean messiah and known as the beatitudes  form the centerpiece of the so-called Matthean `Sermon of the Mount’ (Matthew 5:3-7:27)  and  to some degree also the  Lukan parallel, the `Sermon on the Plain’ (Sermon on the Plain = Luke 6:20-49).

The beatitudes and woes in the Gospel of Matthew.

The nine (`ten’ = Rejoice!) beatitudes of Jesus uttered on the hills, hillocks or “mount” (Matthew, 5:3-10’ cf. Moses on Sinai 10 commandments) have sometimes been contrasted with the `Ten Commandments’ given by Moses on Mount Sinai which commence with the negative “Thou shalt not” (see Exodus 20:1–17;  Deuteronomy 5:4–21).

The beatitudes with the Gospel of Matthew include:

Select Beatitudes and woes within the Gospel of Luke

Luke 6:20–22 contains four Beatitudes uttered to the disciples and set within the so-called `Sermon on the Plain’:

Note also that Luke 6:23 reads “Rejoice ye in that day, and leap for joy: for, behold, your reward is great in heaven: for in the like manner did their fathers unto the prophets” (cf. Matthew 5:11-12) :

Note also that there are some seven Woes  relating to the Pharisees in Luke 11:37-54.

Though the question of Abrahamic woes will be dealt with in Pt. II of this monograph we may  note at this point that certain biblical beatitudes and woes have eschatological implications. e.g. Ezekiel 30:2.

With select text and transliteration :

In his JE article Alexander Altmann defines beatitude as follows :

“BEATITUDE (Heb. הַצְלָחָה, haẓlaḥah; osher), “the blissful state of the soul in the World-to-Come (*Olam ha-Ba) that constitutes the ultimate end of human life.”

Some beatitudes anticipate or predict the glories of a future age relative to individual piety. NT examples being,

“The Old Testament and postbiblical literature contain a large number of beatitudes, presenting them in a wide variety of forms and functions and making it thereby difficult to see their primary characteristics. Comparing all these materials leads to the following conclusions:

The Syriac [originally Greek?] Diatessaron of Tatian and the Arabic trans. of  Abu'l-Faraj `Abd-Allāh al-Iraqi  or Ibn al-Ṭayyib (d. 435/1043) contains an Arabic rendering of select NT beatitudes. This Arabic version dates from around 1,000 CE. It is a great significance in the study of the text of the NT : "In the history of the [New Testament] versions, as well as in the early phase of textual developments of the New Testament as a whole, there is no greater and more important name than Tatian" - Arthur Vööbus, Early Versions of the New Testament (1954). Tatian was a pupil of Justyn Martyr in Rome. His originally Greek or Syriac (?) Gospel Harmony known as the Diatessaron ("Compendium," lit. "Through Four") and dates to about 172 [5] CE. Often considered the oldest of the New Testament versions, the Diatessaron was widely used and revered among eastern Christians in late antiquity. It was apparently the preferred Gospel text of the orthodox Christians of Edessa. The influential Ephraem the Syrian (306-373 CE) or a member of his `school', wrote an important Commentary on the Diatessaron which is extant in Syriac (Ms. Chester Beatty 709) and a few Armenian manuscripts.

The Beatitudes in the Commentary of Ephrem the Syrian (b. Nisibis c. 306-d.  373 CE) on the Diatessaron.

Ephrem  comments on the first 8 of Matthew’s 9 Beatitudes (Matt. 5:1-10) and the third of Luke’s four beatitudes (Luke 6:21b) (Hogan, 28). Ephrem comments as follows on the NT beatitude about the vision of God by the "pure in heart" :

Paradise· is, to some extent, a present reality. Disciples, at the moment of their baptism, have put on the robe of glory which had been stripped from Adam and Eve at the fall. Accordingly, baptism is an entrance into the eschatological Paradise, and the church is the presence of Paradise in historical time. The disciple, whose heart  is.pure and whose eye is luminous, can begin to see. the Lord in this life, even though he will only be fully seen m etematy. 28

A Qur’ānic neo-beatitude and the Tree of Blessedness.

The NT beatitudes are not exactly re-created in the Qur’an  [1] though this Arabic scripture refers to a refashioned Zabur – Psalms - NT., beatitude  in addition to another expression of `Blessedness’ or Beatitude in the single qur’ānic use of the Arabic  طُوبَى  tubā ("Blessedness").

"And God saw that it was good….. 31 God saw all that he had made, and it was very good (מְאֹ֑ד טֽוֹב ) And there was evening, and there was morning—the sixth day." (Genesis 1:XX).

In his The Foreign Vocabulary of the Qur'an, Arthur Jeffrey, writes as follows : 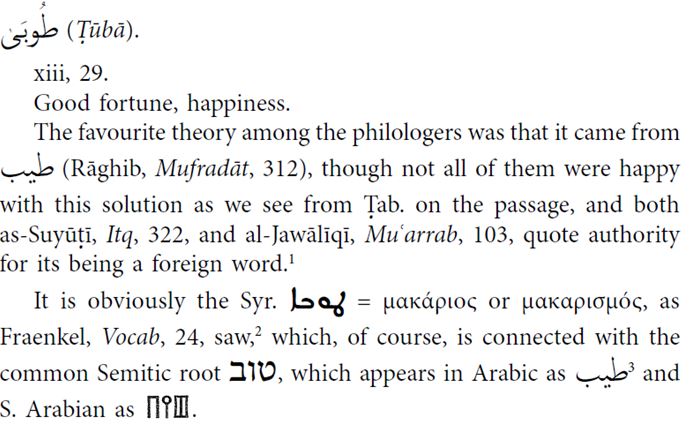 We may note at this point that the fairly common Quranic word  ţayiba   is found as an adjective in Qur’ān 61:12 with the meaning of  “goodly”, “blessed” …

The qur’anic Arabic طُوبَى  ṭūbā is a feminine adjectve which could be translated, `Blessedness’, “Goodness’, `Felicity’, `Happiness’, ‘Joy’ or the like. It occurs only once in the Qur’ān at 13:29 [28] in the form of a quasi-beatitude upon pious Muslim believers who perform good works.

"Others say that it (tuba) is “one of the names of al-Jannat (Paradise) and the meaning of the [Qur’anic] word is al-jannat for them” (8:146). Mujahid said that “Tuba lahum”  is al-jannat (the Paradise-Garden) while others say that “it indicates a tree (al-shajarat) in the Paradise-Garden” (al-jannat) (8:147). All of the trees of Paradise are derived from its branches which extend beyond the surfaces of the Garden-Paradise (ibid). It is a Tree in Paradise unto which God pronounced “Blessed” or said “Tuba”!  Every abode (al-dar) in Paradise encloses one of its branches (ghusn) on which birds (al-ta’ir) are found (8:147-8). Associated also with the jewels and rivers-streams (al-anhar) of Paradise (Cf. David Waines EQ `Tree(s) 5: [358-362] 361).

The Qur’ān contains little direct  reference or citation of the NT though Qur’ān 21:105 is most likely rooted in Psalm 25:13  and  Matthew 5:5. This though there is reference to the "righteous" rather than "meek" who shall inherit the earth.  The three related texts from the Hebrew Bible, the New Testament and the Qur'an are :

12 Who, then, are those who fear the Lord? He will instruct them in the ways they should choose. 13 They will spend their days in prosperity, and their descendants will inherit the land.

"Blessed are the meek: for they shall inherit the earth".

“For We have written in the al-zabur (the "Psalter", "Psalms"), after the Remembrance (al-dhikr), 'The earth (al-ard) shall be the inheritance of My righteous servants (`ibadi al-sadihun).' [105] Surely in this is a Message delivered unto a people who serve... (trans. Arberry, adapted Lambden).