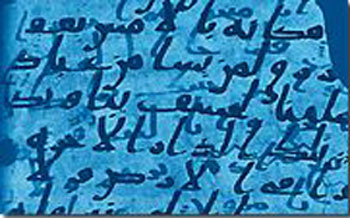 In line with the conviction that they were expressions of waḥy (divine revelation), the sacred kalimat Allāh (Word of God), like the (original) Torah, Gospels and Qur'ān, many of these writings have specific designations derived, for the most part, from time-honored (largely) Abrahamic religious terminology. Key designations for Baha'u'llah's writings thue include :

In the Qur'an the Arabic  masculine noun lawḥ ("Tablet") or its plural alwāḥ occur five times. Three of these occurences are of the plural الواح alwāḥ  and are found in the 7th Surat al-A’rāf ("the Heights"). They relate to the episode of Moses' receipt  of the `Tablets of the [Israelite, Jewish] Law' on Mount Sinai and his subsequent destruction of them when he observed what Aaron and the people has done (see Q. 7:145,150,154):

"And We ordained laws For him [Moses] in the Tablets (alwāḥ). In all matters, both Commanding and explaining All things (kulli shay' in), (and said): "Take and hold these With firmness, and enjoin Thy people to hold fast By the best in the precepts: Soon shall I show you The homes of the wicked,— (How they lie desolate)."

"When Moses came back To his people [from Sinai], angry and grieved, He said: "Evil it is that ye Have done in my place In my absence: did ye Make haste to bring on The judgment of your  Lord?" He put down the Tablets (al-alwah), Seized his brother by (the hair Of) his head, and dragged him To him. Aaron said: "Son of my mother! The people Did indeed reckon me As naught, and went near To slaying me! Make not The enemies rejoice over My misfortune, nor count thou Me amongst the people Of sin."

"When the anger of Moses Was appeased, he took up The Tablets (alwāḥ) : in the writing Thereon was Guidance and Mercy For such as fear their Lord".

The fourth Qur'anic reference is connected with the story of Noah and his Ark found in  Surah 54, the Surat al-Qamar (Surah of the Moon). The ark which bore Noah is referred to as a "well-planked vessel, well-cauked" (so Arberry trans.) This illustrates the sense of Lawḥ (pl. alwāḥ) as a wooden plank, also suggestive of a flat surface which something might be written upon as is the case with inscribed scriptural "Tablets".

The fifth and final Qur'anic reference to a (sing.) lawḥ is found in the eighty-fifth Surat al-Burūj, (The Surah of the Zodiacal Signs) :

Here reference is made to the  well-known  "Guarded Tablet" (Lawḥ Mahfuz) about which a great deal has been written by Muslim Qur'an commentators as well as by the early Shaykhi leaders - Shaykh Ahmad al-Ahsa'i (d.1241/1826) and Sayyid Kazim al-Rashti (d. 1259/1843). Soo too both the Bab and Baha'-Allah.

Individual items of sacred writ deriving from Baha'-Allah are very often referred to as "Tablets" whether they be in Persian or Arabic (or both), very brief or very long; whether relating to matters "mundane" or to matters profoundly theological or to issues of global significance. Many writings are generally called `Tablets' despite the fact that they may have other names or deisignations such as are listed above. Thus,  in other words, on occasion, the totality of Baha'i scriptural writings are reckoned alwāḥ (`sacred Tablets') as are writings also given other literary designations such as those discussed here, e.g. Surahs, Books, Treatises, Scrolls, etc.

In the  commentary  of the Bab,  the  lawh mahfuz (Preserved Tablet) is presented as the "Greatest Tablet" (al-lawḥ al-akbar). This work of the Bab reflects Islamic esoteric traditions, as well, most notably, as the sometimes arcane Khuṭba al-ṭutunjiyya (The Sermon of the Gulf) ascribed to Imam `Ali (d.40/661), an oration which both  Sayyid Kazim Rashti as well as the Bab and Bahā’-Allāh,  regarded very highly.

The word Kitab in Arabic indicates a letter, book or written composition of some kind. A farly large numnber of Baha'-Allah's writings are designated books (kitab, pl. kutub). A well-known example would be the Kitab-i iqan or Book of Ceritude which dates to around 1862. From the Edirne or Adrianope period a weighty, over 200 page  volume is his Kitab-i badi` (The Revolutionary or Wondroud Book). Books from the later West Galilean or (loosely designated) `Akka' period include his centrally important book of laws and injunctions designated in Arabic al-kitab al-aqdas  ("The Most Sacred Book") which is often (loosely) rendered into Persian as Kitab-i aqdas.  (c. 1873). Among the fairly short works of designated books is the late al-Kitab al-`Ahdi (The Book of My Covenant) again loosely rendered into Persian as the Kitab-i `ahd ("The Book of the Covenant").

Occurring eight times in the Qur'an (=Q.), the originally Sabaic word ṣaḥīfa (pl. ṣuḥuf) may have originally meant something like `document'. According to Arabic sources this word indicates a `sheet’ or piece of material for writing upon; hence, `document' , `page of writing’, `scroll’, `scripture’, etc (Jeffery, 1938:192-4; Ghédira, `ṣuḥuf’', EI2 VIII: 834-5; Maraqten, 1998:309). Though the Q. says very little about divine revelations sent down prior to the time of Moses, the word ṣuḥuf  ("scriptures") is used in this connection. There is mention of the "earlier scriptures" (al-ṣuḥuf al-ulā), the ṣuḥuf Ibrahīm wa mūsā ("The Scriptures of Abraham and Moses" Q. 87:19).
In one way or another the Arabic words ṣaḥīfa and ṣuḥuf are quite common in Bābī-Bahā'ī sacred literatures, often indicating specific revealed writings as well as indicating pre-Islamic or especially pre-Mosaic divine revelation. Both the Bāb and Bahā'-Allāh used ṣaḥīfa  in varied and diverse ways  to indicate portions of their sacred writings. The Bāb, for example, wrote a Ṣaḥīfa bayn al-ḥaramayn  usually loosely rendered `Epistle between the Two Shrines' [Mecca and Medina],  (Muḥarram 1261/ mid.Jan. 1845) and Bahā'-Allāh authored the Ṣaḥīfa-yi Shaṭṭiyya (Scroll of the Raging Torrent, c.1857-8) as well as a  Ṣaḥīfat Allah ("The Scroll of God", c. 1858) perhaps 25 or more years later (from or near Acre in Ottoman Palestine) addressed especially to a group of Iranian Jewish converts to the Baha'i religion.

An Islamic Tafsir writing is a commentary or work expository of portions or of the whole of the Qur'an though thuis work may be indicative of the attempt to  explain some other weighty composition.

Ziyarat-Nama (Visitation Tablets) as texts of varying lengh in Persian or Arabic (or both) which commenorate a deceased individual and is meant to be recited at his or her resting place. There are scores of Ziyara texts of importance in Shi`i Islam  especially those centered upon the twelver imams, from `Ali ibn Abi Talib (d. 40/661) to Imam Muhammad al-Mahdi (d. 260/8XX), the twelfth Imam who is thought to be in the heavenly world in occultation (al-ghayba). There are Shi`i Islamic visitation texts for the Prophet Muhamad himself, his daughter Fatima and his descendants the twelve Imam. Some important Ziyara texts suffice for one or more of these Islamic worthies.