The Surah Titles and Isolated Letters of the Qayyūm al-asmā' I-XII.

Both Sunnī and Shī`ī Islamic traditions and sources contain numerous passages which dwell upon the secret, mysterious nature of those letters of the Arabic alphabet which open or occur before 29 of the 114 (= 6X19) sūrahs of the Qur’ān, the Islamic Holy Book. At the beginning of certain qur'ānic sūras varying numbers of Arabic letters are set down, sometimes single letters ( "N", sūrah 68) or groups of between two (e.g. "Ṭ-S", sūrah 27) and five letters (e.g. "A-L-M" = surahs 2, 10, 11, 12, 14, 15 and "K-H-Y-`-Ṣ", sura19). In total fourteen different Arabic letters are used in this way. The phrase al-ḥurāfāt al-muqaṭṭa`āt collectively designates these letters and has been variously translated into English; that the letters are al-muqaṭṭa`ah has been taken to indicate their being, for example, `isolated’, `detached’ or `mysterious’, etc.

The obscurity of these letters is registered, for example, in the clear, voluminous Tafsīr of al-Qurṭubī and in other Shī`ī sources which relay a tradition of (among others) `Alī ibn Abī Ṭālib (first Imam of the Shi`ah, d.40/661) or Sufyān al-Thawrī:

The [isolated letters] are the sirr Allāh (mystery of God ) in the Qur’ān. For God there is a sirr  (mystery) in every [sacred] Book among His Books.

Tradition has it that the significance of these letters is known only to God. They are often classified among the mutashābbihāt, the `ambiguous’, `unclear’ or `obscure’ verses; as opposed to those muḥkamāt, `unambiguous’, of `established’ significance. Despite the arcane nature of the letters, attempts to clarify and expound their significance are legion. While concrete senses have been allotted the letters by western orientalists and academic Islamicists, they have also been, given mystical, qabbalistic and other esoteric meanings by Muslims. Deep and allusive senses have been thought to be implicit in these mysterious letters of the Qur’ān.

In a number of the alwāḥ (scriptural "tablets") or writings of the Bāb and Bahā’-Allāh, interpretations of the mysterious letters can be found. On occasion they likewise use similarly `detached’ Arabic letters at the beginning of their writings. Following qur’ānic precedent and from the very outset of his messianic career (1844-50), the Bāb in his neo-qur’ānic Tafsīr sūrat yūsuf (Commentary upon the Surah of Joseph) set down disconnected letters before most of the named sūrahs of this work. Various other mostly early, works and alwaḥ of the Bāb including his Kitāb al-rūḥ  (Book of the Spirit, 1844-5) and Kitāb al-fihrist (Book of the Index, 1845) commence with detached letters.

The Bāb also drew attention to the chronological and prophetic import of the mysterious letters found in the Qur'ān and touched upon in Islamic tradition. He even corrected some abjad-numerologial speculations recorded in the Biḥār al-anwār (Oceans of Lights) of the great Shi`i encyclopedist Muhammad Bāqir Majlisī (d. 1699). In his Persian Dalā'il-i sab'ih (Seven Proofs), he refers to an Islāmic tradition as transmitted through Abī Labīd Makhzūmī from Imām Abū Ja`far (= Muhammad al-Bāqir d. 126/743) in which the year 1260[7] AH is indicated in certain of the sets of disconnected letters of the Qur'ān. This tradition was relayed by `Ayyāshī and is recorded, for example, by Mullā Muḥsin al-Fayḍ al-Kāshānī in his Qur'ān Commentary, Tafsīr al-Ṣāfī  (see on Q. 2:1). The Bāb interpreted this tradition relative to the year 1260 (AH= 1844 CE) of the coming of the Islamic promised one, the time of the advent of the Mahdī-Qā'im. This can be calculated from the chronological realization of the numerical value of the first seven sets of disconnected letters, those which occur between A-L-M (in Q. sūra 2) and A-L-M-R (in Q. sūra 13). Baha’-Allāh, in his lengthy Lawḥ-i ḥurūfat al-muqaṭṭa`āt (c.1857?), refers to this or a similar tradition.

The names of all (or most) of the 111 sūrahs  (lit. sections, "chapters") of the QA were given by the Bāb himself; most notably in his early Kitab al-fihrist  (Book of the Index, c. 1845 which exists in several good mss. Some mss. of the QA include many of the surah titles (e.g. al-mulk  ["Dominion"] for QA1 = Q.67) others do not. These surah titles reveal a good deal about the Bāb's early areas of  doctrinal interest and highlight certain eschatological topoi.

The chart here sets out the complete  Surah Titles of the QA  with the qur'anic surah number equivalents when they exist and is primarily based upon several mss. of the K. Fihrist. This next chart sets down data pertinent to the al-ḥurūfat al-muqaṭṭa`āt Isolated Letters of the QA. according to the 1261/1844-5 and other mss. of the QA. 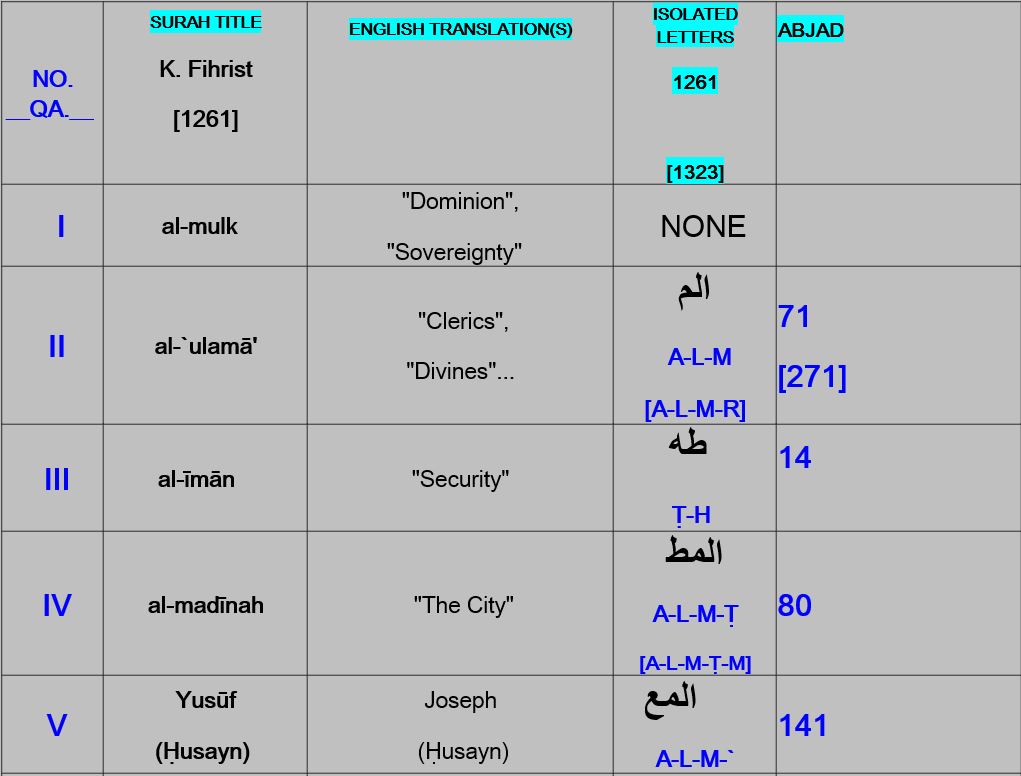 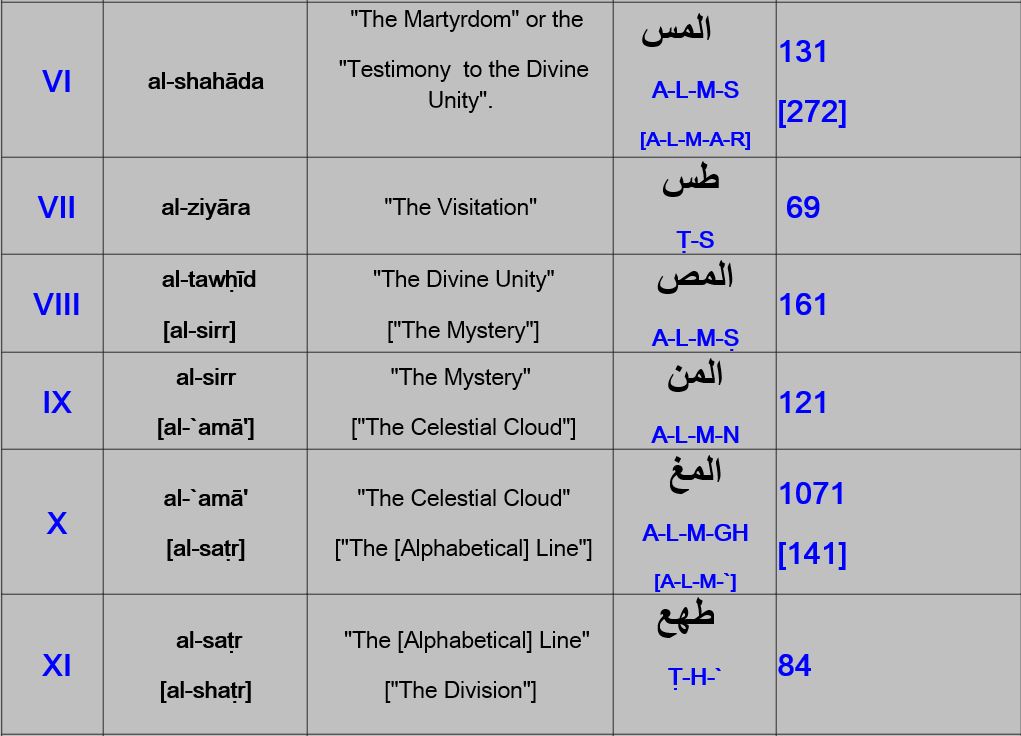