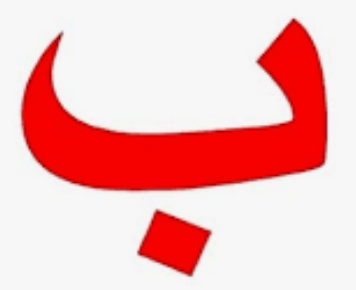 The title Nuqṭah and its extended forms have important theological dimensions in the writings of the Baha'-Allah. The founder of the Baha'i religion articulated a theology surrounding the Nuqta. He made the claim to be the Nuqta as the spiritual "return" of the Bab as the Primal Point, the Nuqtat al-awwaliyya.

From early on Baha’u’llah dwelt on the symbolic senses of the alphabetical Nuqtah or “Point” as a symbol of the genesis of creation and revelation. He also identifies himself with the Bāb by speaking of himself as the Nuqṭah, the “Person” of his predecessor, and his “return” as the new manifestation of the first Point or Point of Reality.

Extracts from the `Tablet of All Food’ (Lawḥ-i kull al-Ṭa'ām):

lf the Primal Point [the Bab] were alive in these days and witnessed My grief he would assuredly, at all times, comfort Me [Baha'u'llah] , treat Me tenderly, and fill Me with ardent joy. At every moment would he strengthen Me.

Would that I had died after him [the Bāb d. 1850 CE], before these days [early 1850s CE], or were one quite forgotten, consigned to oblivion.

Comfort me! Do not calumniate Me or hasten My affair for I am a servant who hath believed in God and in His signs [or verses], and there doth not remain of My days except a few. God, My Lord, is sufficient protector against you since he sufficeth Me and sufficeth he whom he desired aforetime. Sufficient is the careful account of His own Seif. Lord! Pour out patience upon Me and make Me victorious over the disbelieving peoples who do not cry out except in accordance with their own delusions or move except as their idle fancies prompt them. Say: It is not for you to ask why it is this way for you neither comprehend nor understand. ... Say: 'This is the Point (al-nuqta) from which the Words of God were realized and the sacred, pristine Scriptures (ṣahā'if quds tajrād) and mighty, preserved Tablets (alwāh) made manifest'.
Say: '[He is / I am assuredly] the Word of God (kalimat Allāh) from which the Points were manifested and unto which they are caused to return. Then it is also by virtue of this [the Points/ the Word] that [things] come to pass at an appointed time'.

In the Name of God, the Radiantly Splendid, the All-Glorious.

Praised be to God Who made the Point (al-nuqta) to be outstretched within the Book of Origination (kitab al-ibda`a), an Ornament (taraz) through which is  the Genesis of Creativity. From it He differentiated the knowledge (`ilm) of what hath been and what will come to pass. He made it to be a manifestation of the mysteries (mazhar al-asrar) of what distinguished the [Arabic letter] “K” and the [Arabic letter] “N” (="Be!")! He ennobled it [the Point ...

The intention of the allusive letter "N" (nūn) [in Qur’ān ] is the name Muhammad which We previously expounded as signifying the "Fish". It, verily, circleth around the Point which is [a dot placed] at its centre. This is the sign that al-nubuwwa ("Prophethood") which circleth around the Point (= the Bāb) which God made to be the origin of the creation of the Bayān and the theophany of the Cause of the All-Merciful" (INBMC 56:2X).

The Lawḥ-i Sayyāḥ "Tablet of the Traveler" or "Courier" is also known (for reasons that are nor clear) as the Sūrat al-widād ("The Sura the Love"). It is to be dated to the early Edirne [Adrianople] period (c.1864/5?),

Say:`This is the Point (al-nuqṭa) from which the Words of God were realized and the sacred, pristine scriptures (ṣaḥā'if quds tajrād) and mighty, preserved Tablets (alwāḥ `izz ḥafīẓ) made manifest'. `[He is assuredly] the Word of God (kalimat Allāh) from which the Points were manifested and unto which they are caused to return. Then it is also by virtue of them [ Word / the Points] that things come to pass at an appointed time'.

Say: `The Proof (al-burhān) was made manifest from this [Word of God = the Point(s)] in all the eras and the Words of God were completed as was His Proof (ḥujjat) unto all the worlds'. Say: `Should He manifest but a single letter it would assuredly be utterly novel relative to all that hath been mentioned in the created domain throughout an eternity of eternities (fī azal al-āzāl) and compared to all that hath streamed forth from the [Divine] Pen (al-qalam) within mighty, perspicuous Tablets' (alwāḥ `izz mubīn).

Extract from the `Sūrat al-Ism’ ( The Surah of the Name) of Baha’u’llah.

"Tablet of the Traveler"

At this moment the Soul [Person] of the Most Transcendent Point (nuqta-' a`la) is situated (waqif) nigh the Right-Hand side of the All-Glorious Divine Throne (bar yamin-i `arsh-i abha) and uttereth the following luminous, resplendent, blessed, goodly, noble words : "O my Servants! (MAM:177)

Extract from the Lawḥ-i Nuqtah (`Tablet of the Point’) of Baha’u’llah.

So recollect, O people! the moment when there came unto you the Revealer of the Bayān [the Bāb] with wondrous, holy verses. At one moment he said, `I am the Gate of Knowledge ( bāb al-`ilm ) … He [subsequently] said, `I am the Primordial Point (nuqṭat al‑awwaliyya)'… I [the divine, primordial Bāb], verily, sent the Prophets ( al-nabiyyīn ) and the sent Messengers ( al-mursalīn) from an eternity of eternities past…

The Bab nigh the Divine Throne speaks out : At this moment the Locus [Logos-Soul, Person] of the Most Transcendent Point (nuqta-' a`la) [the Bāb] is situated (waqif) nigh the Right-Hand side of the All-Glorious Divine Throne (bar yamin-i `arsh-i abha) and uttereth the following luminous, resplendent, blessed, goodly, noble words :

Lawḥ-i Ḥajj I : Tablet of Bahā’u’llāh for pilgrimage to the Shiraz located house of the Bāb

I bear witness that the Primal Point [the Bab] our Lord the Exalted, the Most High is, truly, His Manifestation in the realm of the empyrean and His Appearance in the kingdom of the decree and His Dawning-place in the domain of destiny. Through him all created things are brought to life and all existence is renewed and the balance of justice hath been set up upon the station of praiseworthy glory. Through him the Bird of the Throne hath crowed and the Dove of Glory hath warbled and the resurrection of the command hath come to pass and all that lay hidden in the treasuries of hidden glory hath been made manifest (trans MacEoin, Rituals XX under revision by SL).

In his K. Badī` (c. 1868). Bahā’Allāh specifically established a typology between himself and Jesus and between the Bāb and John the Baptist:

By God! The theopahny (ẓuhūr) of the Primal Point [of Reality = the Bāb] and this most wondrous, most splendid theophany [= Baha-Allah] is the exact correspondence of the manifestation of Yaḥyā ibn Zakariyya (= John the Baptist) and the Spirit of God [= Jesus] (K. Badī`, 114).

This typological parallelism is also spelled out in other alwāḥ of BA*. See especially his Sūrat al-asmā’ (IQ:95ff ). Though the Q. refers to Yaḥyā (John the Baptist) as a nabī (prophet), BA* in his K. Badī` apparently elevates the status of Yahya to that of a rasūl and the herald of a rasūl (= Jesus). This in the light of the fact that both he (BA*) and the Bāb were maẓhar-i ilāhī (= rasūl):

Yaḥya was a nabī (prophet) and a rasūl (envoy-messenger) from God and, moreover, a herald of the forthcoming theophany (ẓuhūr) [of Jesus]. Wherefore did he say, "O people! I announce unto you the glad-tidings of the Kingdom of God and it has assuredly drawn nigh… (K.Badī`,114).

The Bāb's cosmogonical and theophanological statements about the nuqta were thus taken over and adapted by Baha'-Allah in numerous of his alwāḥ. The origins of creation are related to the realization of the nuqṭa as a primordial, blackened teardrop in his Lawḥ-I Hurūfāt al-muqaṭṭa`a (c.1857-8? Māida, IV:50). During the Edirne period in particular he, as the following passage from the Lawḥ-i Sayyāḥ (c. 1271/1864? for Muhammad 'AIī Maḥallatī, Sayyāḥ, the Traveller [d. Cyprus, 1871]) must suffice to illustrate, claimed to be the "Point" as, among other things the spiritual "retum" of the Bāb:

"Say: This is the • Point (al-nuqṭa) from which the words of God (kalimat Allāh) were realized, and the sacred, pristine scriptures (saḥāif quds tajrīd) and mighty Preserved Tablets were made manifest" (L. Sayyāḥ, INBMC 36:52 / Haifa ms.1 ).

The Arabic (Ar.) and Persian (Per.) Writings of the Bāb - Primary Sources, manuscript (ms., pl. mss. ) and published,