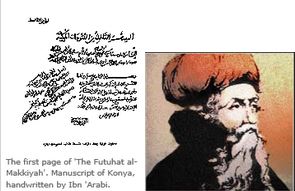 The "Great Shaykh" Muḥyī al-Dīn Ibn al-'Arabī (d. 638/1240) and his diciples and select interpretations of the Lote-Tree motif.

It might be appropriate at the outset to cited Rippins' succinct  EI2 synopsis of the Sufi approach to the mi`raj-lote-tree story and motif:

"In the Sufi՝ description of the quest for the experience of the divine as patterned on the story of the mi'radj, the "lote tree on the boundary" symbolises the point to which knowledge can take the mystic (and up to which point one needs a guide) but beyond which the true experience lies. Other speculations about the tree include the idea that Adam saw-Muhammad's name written on the tree and that the tree is actually composed of the "light of .Muhammad" (nur Muḥammadī")."

In the following passage the sidrat al-muntaha is associated with humanity or with al-insan "the [Perfect] Man" and certain related Qur'anic phrases interpreted in line with authoratative Sunni traditions (hadith) and sometimes non-literally:

The passage extracted above from a section of the al-Futuhat al-Makkiyya dealing with the Mi`raj or Night Ascent' ( Beirut: Dar Sadr ed. np.nd. III:350) is of particular interest. The Chodkiewicz (et al.) sometimes loosely annotated translation is headed `The "Lotus of the Limit" and the Culminating Revelation' and reads as follows: 174

So when I had left [the Temple], I came to the Lotus-Tree of the Limit [sidrat al-muntaha] (Qur'an 53:14),175 and I halted amongst its lowest [al-dunya] and its loftiest [al-quswa] branches.176 Now it was enveloped [ghashiyyat] (Qur'an 53:16) in the lights of [good] actions [anwar al-a`mal] , and in the shelter of its branches were singing the birds of the spirits of those who perform [those] actions [tuyur arwah al-a`malin],177 since it is in the form of Man [nishat al-insan].178 As for the four rivers [al-anhar] [flowing from its roots, as described in the hadith],179 they are the four kinds of divine knowledge "granted as a gift" [to man], which we mentioned in a part (juz’) we called "the levels of the forms of knowledge given freely [by God] [maratib al-`ulum al-wahb]."180

Next I saw before me the cushions of the divine Litters” (Q. 55:77) of the [true] Knowers181. Then I “was enveloped by the [divine] lights” [al-anwar] until all of me became Light [kulli nur an], and a robe of honor was bestowed upon me 182 the likes of which I had never seen” trans. Chodkiewicz + William Chittick and James Morris, in `The Meccan Revelations' vol.1 (New York: The Pir Press, 2001), p. 228. I have added transliteration of the original Arabic ( see above) in square brackets.

In his  Shajarat al-kawn ("The Cosmogonical Tree") the great mystic Ibn al-`Arabī (d. 1270)  has much to say  about the celestial universe and the symbolic relationship between aspects of its realities including the Sidrat al-Muntahā.  He speaks of the Sidrat al-Muntahā as a celestial tree which is one of the shoots of the  ideal, archetypal cosmogonical or cosmological Tree.  He further mentions  a fourth "vehicle" (markab) for actualizing a spiritual relationship between the reality of Muhammad and the celestial Throne of God (al-`arsh) aside from (1) the celestial steed Burāq, (2) the Mi`raj (ladder for ascent) and (3) the wings of angelic beings proceeding from heaven to heaven (ajnihat al-malā'ikat  min al-samā' ilā samā');  namely  (4) "the wing[s] (flight) of Gabriel"  (janāḥ jibrā'il) (which incline)  "towards (ilā) the Sidrat al-Muntahā". Having  stated this Ibn al-`Arabī pictures Gabriel as attempting to draw nigh to the Sidrat al-Muntahā (`indahā, cf. Q. 53;13a). The personified  Reality of the  "Lote Tree" then says to Gabriel, "We are the Night" (al-laylat), your guests  (aḍyāfika)". This perhaps indicates the appearance of spectral personifications of the  "darkness" of impenetrability (Shajarat, 350).  ADD

The Sidrat al-Muntahā also appears as a Reality surrounded by a special class of angels.  All things mundane, the "fruits" of existence, are registered in a related celestial Book (Jeffery tr. 1980: 35). Drawing indirectly on Ibn a-`Arabī   Winter has written,

"it is said that it [the Sidrat al-Muntaha] is a symbol of faith and virtue, and that its fruit represents the experience of the mystic. From its foot four rivers, the Pentateuch, the Psalms, the Gospel and the Qur'ān pour forth; beyond it lie the sphere of the fixed stars and, finally, the lumen gloriae" (Winter tr. 1989: 59 fn.c).

The Kitāb al-isrā' ilā maqām al-asrā... (The Book of the Night Ascent unto the realm of the Night Ascent...) of Ibn al-`Arabi  (see Osman Yahya, Historie... vol.1: 320-322, no.313, sometimes also known as the  Kitāb al-mi`rāj) contains a brief section headed and entitled  Sidrat al-Muntahā. Partly cast in the form of an allegorical narrative closely related to the traditional accounts of the Isrā (night ascent) and Mi`raj of Muhammad this section is introduced as follows:

The mystic wayfarer ( al-salik) said: "So the Burāq (celestial steed) turned back and went forth from the seventh stratum [of Paradise] (al-sab` al-ṭāq) whereupon the Messenger [Muhammad] cast forth the [miraculous] writhing rod (`aṣā al-tasyār) (cf. Q.        ) into the Lote-Tree of Light (sidrat al-nūr). Then the mystic wayfarer said, `So I enquired of him, "What is this Light and Splendor (nūr wa'l-bahā')? And he replied, `It is the Sidrat al-Muntaha'! ... ADD  (Kitab al-isra, 193).