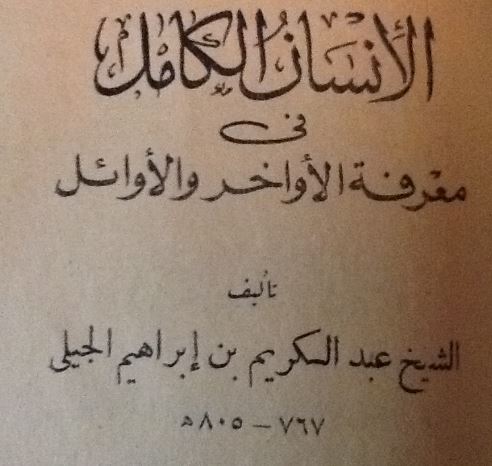 Know that the Sidrat al-Muntahā  is the termination of the position which created things (al-makhlūq) reach  in their journey towards God, exalted be He. And whatsoever is after it is naught except the locale specialized to the True One (= God; al-ḥaqq) alone. It is not possible for created reality to proceed therein and impossible for it to attain unto what lies beyond the Sidrat al-Muntahā. This since therein created reality would be pulverized, exterminated, crushed , obliterated, tending to complete nullity. There is no existence [for created reality] relative to what is beyond the Sidrah  ("Lote Tree [of the extremity]"). Of this there is allusion in the utterance of Gabriel -- upon him be peace -- unto the Prophet [Muhammad] -- upon him be peace -- "If you step forward but a measure you would  be incinerated". The "if" here is a particle of prohibition.   Stepping forward is thus prohibited.
The Prophet [Muhammad] -- blessings and peace be upon him -- transmitted that he found therein the Tree which is the Lote-Tree (shajarat al-sidr) which has leaves like the ears of elephants. It is thus necessary to have complete faith in that for he [Muhammad] transmitted it himself through personal experience. It is, furthermore, possible that the tradition (ḥadīth) [detailing this] is to be taken figuratively.  Such is what we discovered in our [own heavenly] ascent. It is [also] possible that it [the tradition] (hadith) is to be taken according to its concrete sense (ẓāhir). He [Muhammad ] would therefore have discovered its [the Lote-Tree's] symbolic dimensions and its divine, visibly apparent aspects.

The Tree which is the Lote-Tree [of the Extremity] (shajarat sidra) was something perceived by his [Muhammad's] imaginative faculty, evident through the eye of his [Muhammad's] perfection. Wherefore was conjoined for him the definitive disclosure (al-kashf al-muḥaqqaq) both of form and of meaning. It was likewise with respect to all that he [Muhammad] transmitted in this connection and which he discovered in the course of his Night Journey (mi`rāj). And we have absolute faith in everything that he said. And if we should find it [him/ limited] in this respect we have vouchsafed to him but a limited unveiling.  This since our mi`rāj ("night journay") is not like his [Muhammad's] mi`rāj ("night journey"). We merely derive from his [Muhammad's] ḥadīth ("tradition") a [personal] construction not having been vouchsafed the unveiling (al-kashf). We acknowledge that for him [Muhammad] is what lies beyond that which our knowledge cannot attain.

And whoso we have vouchsafed the unveiling (al-kashf) of this ḥadīth ("tradition"), realizes that the intention of the Tree which is the Lote-Tree [of the Extremity] (shajarat sidr) is faith. He [Muhammad] said -- blessings and peace be upon him -- "Whoever fills his interior with nabq  God has filled his heart with faith". For its [the Lote-Tree's] existent Reality exhibits "leaves like elephant's ears". Wherefore is struck the similitude of the magnitude of and the power of that faith. In every one of the houses of Paradise there hangs one of its leaves which is indicative of the faith of the owner of that house.
And know that we allotted the Sidra ("Lote-Tree") a  "station" (maqam an) consisting of eight Presences; in every "Presence" that is of the Sublime observable aspects which cannot possibly be enclosed. That observable aspect may be contrasted with the inclinations of the denizens of these Presences.

As for the [question of theophanic] status [of the Lote-Tree] (maqām). This concerns the appearance of the True One [Ultimate Reality, God] (ẓuhūr al-ḥaqq) through His various manifestations (maẓāhir). They are an indication of His Self-Manifestation (tajalli) in what before Him consists of the realities of Reality (ḥaqīqat al-ḥaqqiyat) and the inner dimension of created reality.

is theophany therein of the True One (al-ḥaqq)  through His Name "the Evident" (al-ẓāhir) in view of the inner aspect of the human being [servant] (al`abd).

is the theophany therein of the True One (al-ḥaqq) through His Name "the Inward" (al-bāṭin)  relative to the exterior nature of the human being.

is the theophany therein of the True One (al-ḥaqq)  through His Name Allāh ("the Deity", "God") in view of the spiritual aspect of the human being [servant].

is the theophany therein [of the manifestations] of True One (al-ḥaqq) through the Attribute "the Lord" (al-rabb) in view of the selfhood of the human being (`servant'; nafs al-`abd).

is the theophany of the [specified] degree (tajalli al-martaba) which is the Manifestation of the All-Merciful  (al-rahman) through the intellect of the human being (`servant'; `aql al-`abd).

is the theophany therein of the True One (al-ḥaqq) through the imaginative faculty of the servant [human being] (wahm al-`abd).

is the gnosis of the Divine Ipseity (ma`rifat al-huwiyya) through the theophany therein  of the True One (al-ḥaqq)  through the "I-ness" (self-identity) of the name of the human being (aniyya ism al-`abd).

This is the most lofty of the Presences.  There is naught after it save "Oneness" (al-ahadiyya). For the created thing (li'l-khalq) there is not therein any scope [ for operating] for its nature is dependent upon the pristine nature of the True One;  dependent upon the necessarily existent properties of the Necessarily Existent [Godhead, Divine Essence] (al-wajib al-wujūd). When, therefore, something emanates on account of the Perfect [One] we say that it is a divine disclosure (`manifestation', theophany' (tajall[in] ilahi) "unto it" (la-hi), "within it" (bi-hi). For in His creation (li'l-khalqihi) there is therein neither place nor any relationship with the thing created (al-khalq).   Nay, rather! it is [wholly] dependent upon the True One (huwa li'-ḥaqq). And it is for this reason that the people of God (ahl Allāh) are held back [from] the theophany of the Divine Oneness (tajalli al-aḥadiyya) before the creation (li'l-khalq). Wherefore does the appearance of the Divine Oneness (al-aḥadiyya) take precedence in what is realized. God is the cut off point for the [human] mind ....