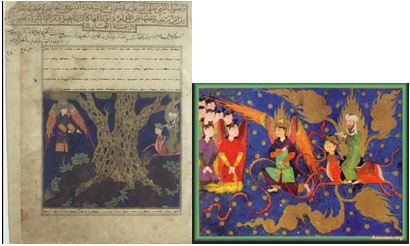 The Mi`rāj and the Sidrat al-Muntahā in select Hadith literatures or Islamic traditions.
Stephen N. Lambden

Under revision and updating- April 2014.

Gerhard Bowering has provided an excellent basic over wiew of the Mi`raj:

MIRĀJ. The belief that Muhammad ascended to heaven in the course of his life and beheld the secrets of the otherworld as no other person had ever beheld them is shared by all factions of Islam. In Muslim religious literature, the idea of the Mi'rāj, Muhammad's ascension to heaven, is closely associated with that of the Isra', his nocturnal journey. Neither term appears as such in the Qur'an, yet both developed in close connection with crucial, though ambiguous, Qur'anic passages. (Enc. Rel. 9:552).

In his article `Sidrat al-Munatahā (Α.), "the lote tree on the boundary"' ( in the 2nd ed of the Encyclopedia of Islam), Rippin notes the important early place of the 'Lote-tree' motif in early Sunni ḥadith literatures registering the mi`rāj of the prophet Muhammad. He writes:

"The full exegesis of this passage [= Qur'an 53:14] arises in a prominent ḥadīth’s report (repeated, for example, in al-Bukhārī, K. manākib al-anşar and K. bad' al-ķhalķ՛, Muslim, K. al-īmān; also see al-Ţabarî, i, 1158-9) which speaks at length of the mi'radj. After Muhammad (who was accompanied by Djibrîl) met with Ibrahim in the seventh heaven, he went on as far as sidrat al-muntahã (also al-sidra 'l-muntahã in hadlth] beyond which no one can pass, and there he gazed upon God (this being "one of the greatest signs of his Lord"). This lote tree is described as having fruits the size of earthenware jars, leaves as big as the ears of elephants and composed of many indescribable and unknown colours. The four rivers of Paradise flow from under it. The idea of a tree being at the apex of the pyramid-shaped mountain of created worlds goes back to ancient Sumerian mythology, and the motifs of receiving food (as in the drinks from which Muhammad may choose in some versions of the story) and having a vision of the divine are all integral parts of the same mythic structure".

The Mi`raj or night ascent of Muhammad is mentioned in numerous ḥadīth (Islamic traditions) as is  the Sidrat al-Muntahā  which is   sometimes associated with the sixth heaven though more often with the seventh heaven as in the Kitab al-īmān (Book of Faith) within the Saḥīḥ (the "Sound" compilation) [of] Muslim  the Sunnī ḥadith compilation of  Muslim ibn al-Hajjaj (d. 261/875):

Then I [Muhammad] was taken up to the seventh heaven.  There Gabriel requested an opening [of its celestial gate]. At this It was enquired: `Who are you?' And he replied `Gabriel'.  Then it was asked `And who is with you? He replied : Muhammad  (may peace be upon him). It was [then further] asked: `Has he been commissioned [by God]?' He [Gabriel] replied: He has indeed been raised up [commissioned as a Prophet]. At this [the gate] was opened for us  and there We encountered Abraham (peace be upon him) reclining against the Frequented Fane (al-bayt al-ma`mūr) wherein enter  seventy thousand angels every day, never to visit [this place] again.  Then I was taken to the Sidrat al-Muntahā (Lote-Tree of the Extremity) whose leaves were like elephant ears and whose fruit was like huge earthenware vessels. And when it was given a covering (ghasha) at the Command of  God (amr Allāh) (see Q. 53:16), it underwent such a change that none among the creatures of God  is capable of [befittingly] extolling [the magnitude of] its loveliness (ḥasan)" (from a ḥadith cited in the Saḥīḥ Muslim, iman).