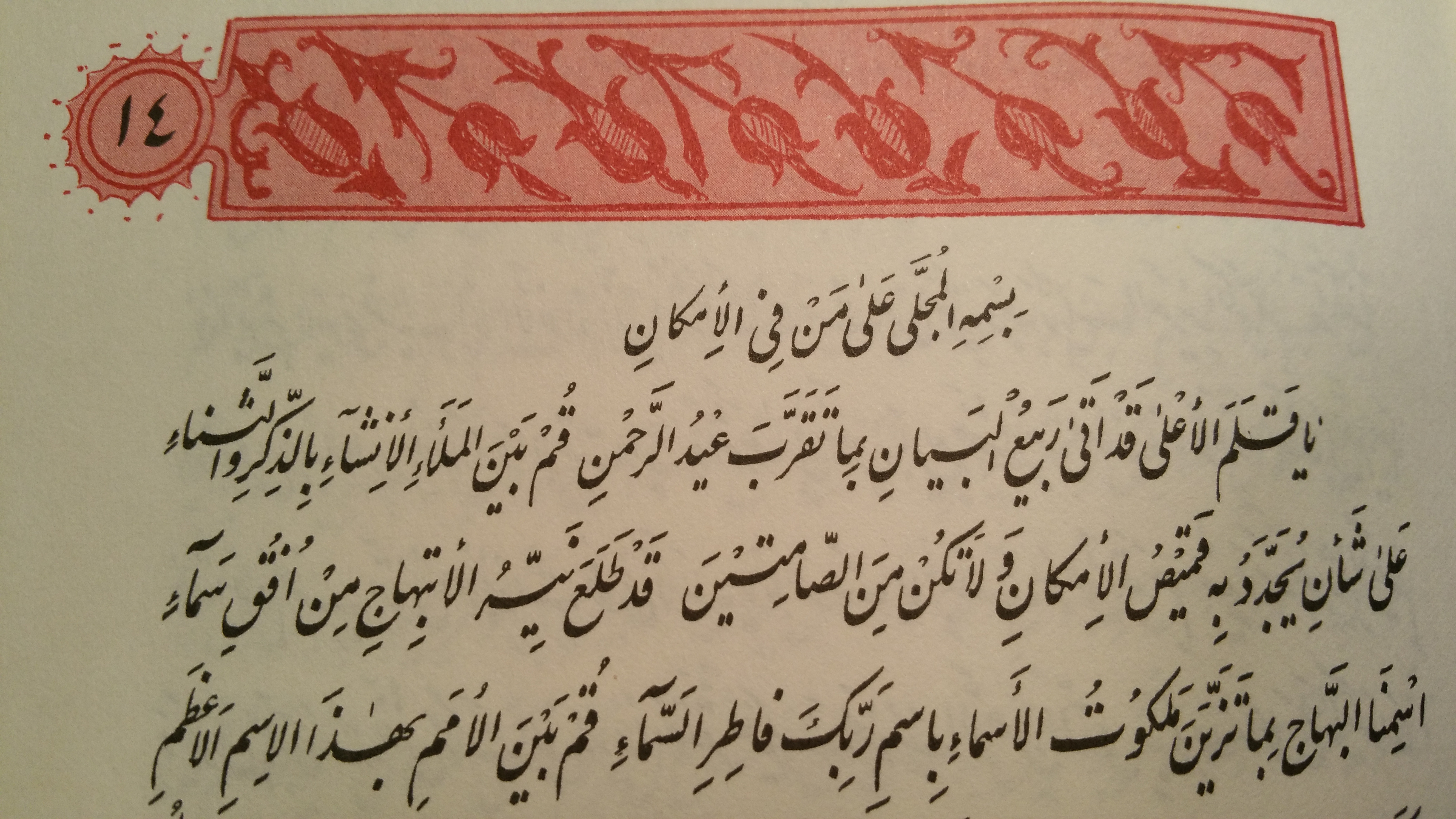 Some Introductory Notes and Comments

Many current Baha'i sources consider the first Lawh-i Ridwan`Tablet of Ridván'   to date from around the time of the first  twelve day Ridwan period, April 22-March 3rd which took place near Baghdad in the Najibiyya Garden in 1863.  This first Tablet is often associated with the text translated by Shoghi Effendi in his compilation, Gleanings from the Writings of Baha'u'llah sect. XIV which begins with the words, "The Divine Springtime is come". This dating, however, has yet to be confirmed.

I here  translate  and prefix the neo basmala  ("In His Name..." phrase)  omitted by Shoghi Effendi and add in square brackets into his translation cited below select points of transliteration so as to indicate clearly the weight of the original Arabic.

In His Name, the Theophany Realized [One Gloriously Reveled] (al-mujalla) before whomsoever is in the Realm of Existence (al-imkan).

This Tablet of Baha'-Allah has an untranslated neo-basmala heading, which reads "In His Name, the One Gloriously Revealed [the Theophany Realized](al-Mujalla) [or the One Self-Evident] unto whomsoever is in the Realm of Existence (al-imkan)". That the theophany of Baha'-Allah is possible for all to experience is here presupposed. The Ridwan event is appropriate to all humanity. It betokens his theophanic declaration to all humankind. Such are the implications of the opening line of this wholly Arabic Tablet. The First Name of God given here, the al-mujalla,  would thus seem to refer to the one in whom the tajalli or Self-revelation of God is realized as a Divine Theophany for all to experience. The Arabic noun المجلى al-mujalla, taken as deriving from جَلا jala or  جلَّى , from the triliteral root j-l-a/w/u  meaning "to make plain, disclose, reveal, bring to light, etc (cf. tajalli = "effulgence"),  might also be translated, `The One Gloriously Revealed', `The One Transfigured' or `The One Made Manifest'; manifest that is,  through the new tajalliyyat, the glorious disclosures, the splendid effulgences of the glorious Self-manifestion of God.

Often cited or alluded to in Babi-Baha'i sacred writings Qur'an 7:143 may lie behind the al-mujalla. at the onset of this Tablet. The following qur'anic verse includes the phrase tajalla rabbu-hu,  meaning (loosely) "when the tajalla, the  glorious manifestation of His Lord took place [before Mt. Sinai]".  This refers to the biblical-qur'anic story of Moses' request to see God which was often reinterpreted by both the Bab and Baha'-Allah as a prefiguration of their own theophany as manifestations of God. It may be implied that the Ridwan event was centered upon a new Divine theophany through the manifestation of the new Name of God (al-ism al-a`zam). This was a theophany available to all (see the Arabic man = "whomsoever", one and all) though it was, according to the Qur'an, once denied even to Moses who, when he was subsequently confronted with the indirect Divine Grandeur, "fell down in a swoon", unconscious. In the new age, conscious humanity now has a chance to experience God through his Ridwan divine theophany. In the original Arabic the last words of this Ridwan scriptural Tablet as translated by Shoghi Effendi, like the initial basmala, also point to the realization of the Divine theophany as the eschatological Self-declaration of God before all humanity (cf. Q. 20:14).This is in the line with the belief in the attainment  by humanity of the meeting or presence of God (liqa' Allah) on the Day of Resurrection (yawm al-qiyama).

That the initial neo-basmala which heads the Lawh-i Ridwan just commented upon should be understood on the above lines,  is clear from numerous occurences of mujalla (Glorious Theophany) in Babi and Baha'i sacred literatures where several hundred occurences can be found. The word is occasionally found in the writings of the Bab; in. for example, his Persian Bayan (two or three times, pp.108, 273) and several times within one recension of his Kitab al-asma' (Book of Names) (se INBMC 29: 131, 382).

Within the Persian Lawh-i Basit al-Haqiqa (Tablet Expository of the Unicity of Reality) of Baha'-Allah which was probably written between the 1870s  and 1880s CE.,  the term mujalla  (Glorious Theophany) is found . In the course of his commenting on the axion associated with Mullā Ṣadrā, Ṣadr al-Dīn al-Shīrāzī (b. Shiraz c.1571-d. Basra, 1640) about basit al-haqiqa ("The Unicity of Reality), Baha'-Allah refers to a poem of the (19th century Qajar period) Ishraqi philosopher, poet and mystic, Hajji Mirza Hadi Sabzavari (1797-1873). This poem has it that since there is "no Moses" alive to hear the Sinaitic declaration of Divinity, "I verily am God!",  this divine utterance could be heard from any or every existing bush - as opposed to the one Sinaitic tree or burning bush! Summing up Sabzavari's meaning and affirming its basic truth,  Baha'-Allah notes that the poet indicates that the true mystic knower (arif) can rise up to a station in which the "lights of the effulgences (tajaliyyat) of the radiant مجلى mujalla (One Gloriously Revealed)" can be envisioned, while the ears might also hearken unto His declaration of divinity. The use of mujalla here again links it with the nexus of ideas associated with the Divine theophany and with the declaration of Divinity from the Sinaitic Tree or Bush. Baha'-Allah stated he had voiced anew the  eschatological call, though Sabvarari and his like, he indicates, were unable to hear, perceive or experience it!

مجلى mujalla  the Glorious Theophany or more basically, `that which is revealed',  is quite common in the writings and talks of `Abd al- Baha'. It is often linked with the Qur'anic Arabic word for Mount Sinai, al-tur ("The Mount"). The mujalla-i tur ("theophany on the Mount") is quite frequent as an expression of the glorious power of divine disclosure of Baha'-Allah (see for example, Makatib-i Hadrat-i `Abd al-Baha' I:86,257,421; III:239, 500; IV:97, 132; V:2,4; VII:181, 224; VIII: 65, 122, 184, 195). We also find al-mujalla once in Mufawadat ("Some Answered Questions", c. 1904-6 CE) in the section about the individual personalities of the Manifeatations of God, `The human condition and the spiritual condition of the Divine Manifestations' (= Sect. 39, Eng. pp. 155-156). The words  امّا مجلّی در اين مرايا يك شمس است "Now as for the mujalla (Glorious Divine Theophany) [which is reflected] in these "mirrors" (maraya), it is even as a single "Sun" (shams)". These words underline the essential oneness of the Divine Reality of the Manifestations of God which is indicated by the word mujalla, the Divine Reality which is revealed or reflected in the "mirrors".

Among many other references in the numerous Persian and Arabic writings of the son of Baha'-Allah, there is, for example, a prayer of `Abd al-Baha' beginning : "He is the All-Glorious (al abha)" Therein we find Baha'-Allah associated with the Divine Theophany at Sinai (al-tur, the "Mount") and one referred to as al-mujalla :

There are numerous further significant uses of مجلى mujalla  (Glorious Theophany)  throughout Bab'i-Baha'i primary sources. The above paragraphs only indicate the implications of a few select texts.

Some Notes and Commentary on the Text and the Translation of Shoghi Effendi.

[1] The opening Paragraph, the Divine Springtime.

At the commencement of this scriptural Tablet it is clear that God informs the "Most Exalted Pen" (qalam al-a`la), the personified power of revelation centered in Baha'-Allah, that a new eschatological era has come about. It is clear, furthermore, from the openings paragraphs of this scriptural Tablet, that the Name of God  al-bahhaj ("The Blissful) is especially associated with the theophany of al-Baha' (the Divine Glory), the Greatest Name of God (al-ism al-a`zam) or the person of Mirza Husayn `Ali Nuri, Baha'-Allah (1817-1892 CE). His eschatological advent is an expression of the beatitude or blissfulness when "all things" are "made new"; with the joy of the potential or actual regeneration of everything. This marks the commencement of a new era which is expressed as a "divine springtime" (rabi` al-bayan) or, more literally, a "Springtime of the Bayan" (Exposition), a new era relative to the religion of the Bab or an era of the deep exposition of things (bayan) consonant with a new age.

In the paragraph beginning, "Attract the hearts of men..." (p.33), Baha'-Allah is instructed by God to declare his messianic, theophanic identity as the source of divine revelation (wahy) to  humankind. The Divine command addresses him with the command : "Say: This is the Voice [Melody] of God (lahn Allah), if ye do but hearken". There follows four key declarative revelations. First he is told to identify himself as the eschatological locus of divine revelation : "This is the Day Spring (matla`) of the Revelation of God [wahy Allah], did ye but know it.  Secondly, he should identify his purpose with the emergence of the amr Allah, the religion or "Cause" (amr) of God : "This is the Dawning-Place of the Cause of God [mashriq amr Allah] , were ye to recognize it".  Thirdly, he should declare himself to be the  mabda` hukm Allah, the "Source of the commandment of God" and bid the people "judge it fairly". Fourthly, he should declare his identity as "the manifest and hidden Secret (al-sirr al-zahir al-mastur)" or the eschatological  huwa, He is" indicative of the presence of the manifestation of God (mazhar-i ilahi) on earth.

The Mother Book, the umm al-kitab.