The Bab - The Alleged Wasiyyat -Namah ("Will & Testament"). 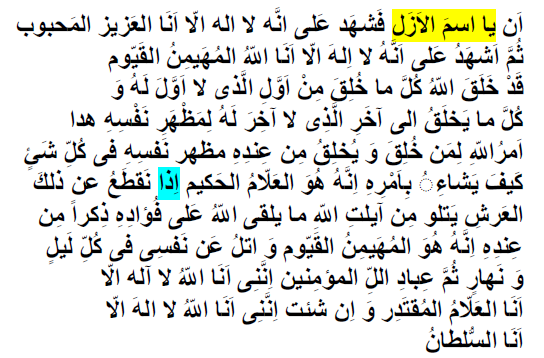 The Waṣiyyat-nāma ("Will and Testament") of the Bab (1819-1950) was written around 1849 CE and came to be cited by Azali Babis in arguing for an elevated position for  Mīrzā Yaḥyā Nūrī, Subḥ-i-Azal (c. 1831[4]-1914) as the successor of the Bab and more besides. Baha'u'llah (1817-1892) likewise cited it in consolidating and articulating his own claims.  Although a critical edition of this text has yet to be established (the original autograph ms. appear to be lost), its basic authenticity seems beyond question. It has been frequently  cited in a number of primary Baha'i scriptural sources as well in a considerable number of Azali writings including those of Mīrzā Yaḥyā Nūrī himself and in the polemical writings of various of his supporters and adherents. A few Baha'i apologetic and related writings also touch upon issues raised by this text. Its authenticity is generally doubted although detailed studies of it are very few. This despite the fact that Baha'u'llah himself cited the Waṣiyyat-nāma ("Will and Testament") of the Bab  and expounded select verses of its Arabic text. He used key phrases within it in one or more of his personal seals and articulated his theophanic claims with reference to it.  These points I have argued in an unpublished paper:

Around the same time that I had begun studying the position of Mirza Yahya and aspects of the Waṣiyyat-nāma ("Will and Testament") of the Bab,  Sepehr Manuchehri obtained collated and translated select mss. of this work in his useful `The Primal Point’s Will and Testament Translation and Commentary'.

Citations and interpretations in Babi-Azali Sources:

Citations and interpretations in Baha'i Sources:

The  Waṣiyyat-nāma opens with an address to the Name of God al-Azal as follows:

Trans. Stephen Lambden from INBMC 64: 95-102 and various other unpublished mss.

[1] Inasmuch as We are cut off from that Divine Throne (al-`arsh) it is necessary to recite the verses of God (āyāt Allāh) that one might  Encounter God through his inmost heart (fu'ad), a remembrance (dhikr an) that cometh from Him. He, verily, is the Help in Peril, the Self-Subsisting. [2] And invoke Mine own Logos-Self every evening and morning. Then [remember also] such servants of God as are true believers, `I, verily, am God, no God is there except Me, the All-knowing, the Powerful'.

[3] And if I Will, I, verily, I am God, no God is there except Me, the Sovereign, the Inaccessible. [4] And bear witness that I, verily, I am He Who liveth in the Abhā horizon (ana al-ḥayy fi ufq al-abhā'). [5] Hearken unto all who make mention of the verses and I, verily, I am the best of those given to remembrance (khayr al-dhākirīn).  [6] He who is present before the Throne of thy Lord is he who is in the Presence of God,  the Help in peril, the Self-Subsisting. [7] And there is no single reward that is greater than being present should he be among those possessed of certitude.  [8] Then bear witness that God is Subtle beyond every possessor of subtlety, subtle indeed. [9] He loveth that he should bear witness [seated] upon a [celestial] Throne. He, verily, crieth out from His All-Glorious Lord (rabbihi al-abhā).

A alleged Tablet of the Bāb for Mīrzā Yaḥyā Nūrī, Subḥ-i Azal (c.1831-1914 CE): the so-called  Waṣiyyat-namah or `Testamentary disposition'.

[1] Should detachment from that Throne (al-`arsh) [= the Bāb] come about, recite ye then the verses of God (āyāt Allāh) which God cast upon the inmost heart (fū`ād), as a remembrance (dhikran) which cometh from Him. [2] He, verily, is the Help in peril (al-muhayymīn), the Self-Subsisting (al-qayyūm). [3] Then also recite ye the verses of God (ayāt Allāh) relative to Mine Own Logos-Self (nafī), every evening and every morning, then also for the sake of such servants of God as are [true] believers. (`ibād Allāh al-mu`minīn) [4] `I, verily, I am God, no God is there except I Myself, the All-knowing (al-`allām), the All- Powerful (al-muqtaddar)'. [5] And if Thou do so will, I, verily, I am God, no God is there except Me, the Sovereign (al-sulṭān), the Inaccessible (al-manī`).

[1] And I bear witness that I, verily, I am indeed He Who liveth in the Abhā (All-Splendid) Horizon (anā al-ḥayy fī ufq al-abhā).  [2] Hearken ye unto all who make mention of my verses for I, verily, am the best of those subject to remembrance (khayr al-dhākirīn).  [3] Such as are present before the Throne of thy Lord (`arsh rabbika) [the Bāb] are even as those who have attained the presence of God (bayn yadā Allāh), the Help in peril (al-muhaymīn), the Self-subsisting (al-qayyūm). [4] And there is no single reward (jazā’) that is greater in magnitude than that one be numbered among those possessed of certitude (al-mūwiqnīn). [5] Then bear thou witness that God is One Subtle (laṭīf) beyond every possessor of subtlety (laṭīf an), Subtle (laṭīf an) indeed. [6] He loveth that he should bear witness upon a Throne (`arsh) that He hath indeed cried out from His All-Glorious Lord (rabbihi al-abhā), `He hath indeed created what is in the Dominion (fī al-mulk) with His permission for He is indeed One Bountiful among those who are given to beneficence (al-ajwād al-ajwadīn). [7] God loveth that they should behold in the surfaces of the Mirrors (mirāt) the [pure] Crystal (bullūr)!  [8] Then also [He loves]  that they should behold these surfaces (al-awa   ) in the stones (al-aḥjār) which were created suble (al-luṭf) to the extent of all   ...

`The Position of Mīrzā Yaḥyā Núrí Subh-i-Azal, The Some aspects of Azalí Anti-Baha'i Polemic and Baha'i Apologetics By Paper  Presented at the Irfan Colloquia Session #8 (English) Newcastle, England December 8-10, 1995. Presented Sunday, 9:00-10:00 (see abstract below and at URL).

The exact nature of the position of Mīrzā Yaḥyā Nuri, Subh-i-Azal ("The Morn of Eternity," 1830-1912) following the martyrdom of the Bab (1850) has long been a subject of Baha'i-Azali debate. The Bab wrote a number of Tablets to Mīrzā Yaḥyā and Baha'u'llah as well as an Arabic Waṣiyyat-nāma  ("Will and Testament") in which (among other things) Yaḥyā's position and future role were indicated. From 1849-50 Yaḥyā was given elevated titles and a key future role in the religion of the Bab. The nature of this role has been variously understood and widely misrepresented so as to discredit the purpose and claims of Baha'u'llah.

No academically informed biography of Yaḥyā has to date been written. His numerous Persian and Arabic writings have hardly been studied at all. The quasi-Babi musings and anti-Baha'i sentiments of Yaḥyā and his Azali supporters are expressed in a multitude of Persian and Arabic writings and a few texts in western languages. Directly or indirectly they continue to exert a distortive influence upon the understanding of the Babi and Baha'i religions. Towards the end of his mission the Bab wrote to Baha'u'llah (1817-1892) through Mīrzā Yaḥyā, referring to him by means of the abjad value of his name (Husayn-'Ali = 238), instructing him to protect and take care of his half-brother. This is exactly what Baha'u'llah did for more than a decade; according to his Lawh-i-Sarraj for no less than twenty years (1846 to 1866?).

Prior to his semi-secret Ridvan declaration (April 22-May 3, 1863) and complete break with Yaḥyā during the mid-Adrianople period ("The Most Great Separation" 1866) Baha'u'llah basically acted as a leading Babi; to quote Shoghi Effendi he "appeared in the guise of, and continued to labor as, one of the foremost disciples of the Bab" (God Passes By, 128). This initial support of Yaḥyā is reflected in such early Tablets as the pre-Kurdistan Lawh-i-kull al-Ta'am ("Tablet of All Food" c. 1270 = late 1853-54) and the (fragmentary) Surat al-kifaya ("The Sura of the Sufficiency" 1854-57?). It is somewhat more explicitly stated in later Tablets, including the Surat al-haykal ("The Sura of the Temple" c. 1873?) where we read of one upon whom was sprinkled a "dewdrop" from the "Fathomless Deep of the Ocean of Knowledge" and who was elevated to such an extent that "all [Babis] rose up in praise of him [Yaḥyā]." Baha'u'llah protected Yaḥyā and even revealed Tablets which were dispatched under his name.

Despite the educative and loving care extended by Baha'u'llah to Yaḥyā, his younger half-brother ultimately attempted to kill him, and had earlier pronounced the death sentence upon the prominent Babi Mirza Asadu'llah Khu'i, entitled Dayyan ("the Judge") by the Bab. In view of his half-brother's politically subversive activities and murderous attempts to repress Babi challenges to his inadequate leadership role -- reflected in such writings as his possibly early Kitab al-wahid (185?) and al-Mustayqiz ("Sleeper Awakened," c.1854-55)--it is astonishing that Baha'u'llah maintained a 'noble silence,' a 'messianic secret' for so long (from 1850 to 1863-66). According to Baha'i sources it was the corruption of Yaḥyā by Sayyid Muhammad Isfahani (d. 1872)--the Antichrist of the Babi dispensation -- which led him to hubristic self-deification and ungodly ways. It was ultimately during the mid-1860s that Baha'u'llah made a complete break with Yaḥyā and began to proclaim his own divine mission more openly to the Babis and to all mankind. This break was expressed scripturally with the revelation of one of the several Tablets entitled Surat al-Amr ("The Sura of the Command").

Hundreds, if not thousands of the Tablets of Baha'u'llah of the Adrianople period (1863-68) counter the contentions of the supporters of Mīrzā Yaḥyā, Subh-i-Azal (= early Azali Babism) e.g. the Lawh-i-Sarrāj (c.1867) and Kitab-i-Badi' ("The Wondrous Book" 1867). Anti-Baha'i Azali polemic has long directly or indirectly informed modern orientalist scholarship, including the writings of E. G. Browne (d. 1926) and of A. L. M. Nicholas (d. 1939), who, in 1933, wrote his brief quasi-Azali Qui est le successeur du Bab? This influence is also marked in the anti-Baha'i writings of Christian opponents of the Baha'i Faith. Without adequate consultation of primary sources Christian missionary and other anti-Baha'i writers have repeated Azali contentions and misrepresented the relationship between Baha'u'llah and his younger half-brother. An example of this is to be found in the Presbyterian missionary William M. Miller's The Baha'i Faith: Its History and Teachings (South Pasadena: William Carey Library, 1974) which makes much use of materials supplied by Jelal Azal (d. 1971), an anti-Baha'i grandson of Mīrzā Yaḥyā. In this paper these and related doctrinal issues will be examined with a view to clarifying the Baha'i viewpoint and exposing the inadequacy of aspects of neo-Azali anti-Baha'i polemic.