Tablet to the 16th Letter of the Living: Mirza Muhammad ‘Ali Qazvini 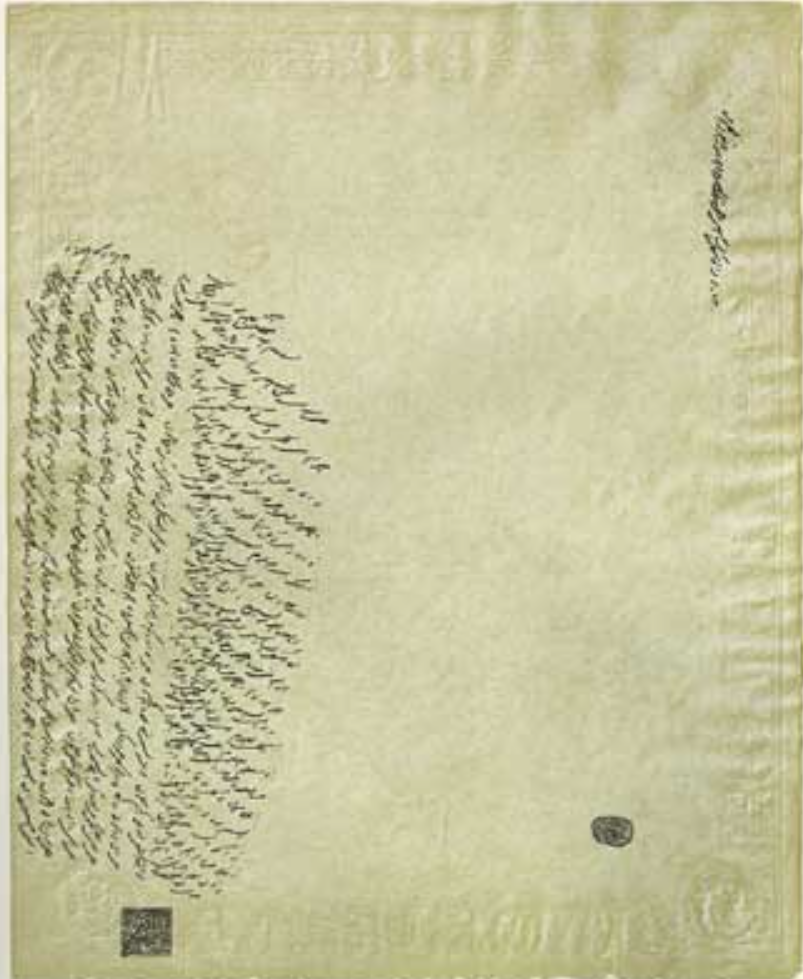 Tablet to the 16th Haykal (Letter of the Living):

This is what We sent down unto the Sixteenth Haykal (Temple, Personage)  I testify that He, no God is there except Him, the Mighty, the One Beloved

In the name of God, the Help in Peril, the Mighty!

Say: He is the one who created the heavens and the earth,

mighty above everything, and all will return unto Him.  [2] He is the one who bringeth to life and causeth to die and all will draw nigh unto Him, the King of the heavens and of the earth and whatsoever lieth between these twain, [3] And all shall indeed return unto God.  [4] He is God, no God is there except Him in times past and and in times to come.

Say: All shall be gathered unto Him.

[2] Unto God is all that are in the heavens and upon the earth. And all act according to His Logos-Command (amr). [3] Say: He is One Who Subdueth His creation, And He is the King, the Supporter, and the All-Eternaled (daymum) [sic.].  [4] God testifieth that He, no God is there except Him.

Say: All before God are prostrate.

He is the one before whom prostrateth whomsoever is in the heavens and upon the earth and whatsoever lieth between these two, the Mighty, the Glorified.

[1] This is a missive (letter, book) from before [the letter] al-Tha', unto the sixteenth Haykal, so bear thou witness that he is the Mighty, the Beloved one   (al-aziz al-mahbub).  [2] He is the one in whose hand is the Lahut  (Divine Realm) of the Might of All Things (lahut al-`izz kull shay') and all before Him are prostrate. [3] He is God, no God is there except Him both from times past and in times to come and all unto Him are raised up.   [4] Unto Him is whatsoever is in the heavens and on the earth and whatsoever lieth between these two.  ]5\ No God is there except Him, the Living One, the Self-Subsisting.

[2] Say, He is the one Victorious above everything, both relative to the past and times to come.  [3] And all at His Logos-Command are upstanding (qa’imun).  [4] He is the Fashioner of Destiny according to His command and all stand in a state of servitude before Him.

[1] And His is the kingship of the heavens and of the earth and all are mindful about Him. [2] Say: Fear ye God, O thou concourse, from the day when you were  informed [knowledeable] about God.  [3] And fear ye also the Day in which you were present between the hands of God.  [4] This Day God will ask about everything that you have done. This Day God will testify according to what you instituted.

Say: I warned you about God should thou be truly informed.

Say: I am indeed the bearer of the news of the (coming of the image of) your like, for he will descend unto me and I am indeed your lord, so how is it that you are not certain thereof? Say: There is nothing about which I am concerned except it is through God’s doing, for there is no God except Him, the Powerful, the Destiny-shaping.

[1] Say: I have desired naught save the good for you.  So why then are you not assured?

[2] Say: I indeed counsel you on behalf of God your Lord, so why do you not prostrate yourselves before God? [3] Then, on account of His verses, be befittingly mindful.

[4] Say: I have indeed given you the good news of the meeting (liqa') with your Lord, though but few amongst you are befittingly aware.

[4] Say: the believers are those who circumambulate about me as thy chosen ones, for they are the ladders/steps on the part of God. And thy chosen ones are those for whom is the true attainment.  God will reward them with the paradise of His eternity in line with that which they have accomplished through the mercy of their Lord, the Eternal One.

Say: the unbelievers are they who have not come to certainty about my verses.  So when they witnessed their circumstance (shi‘atihum), they failed to attain true remembrance.  And they suppose that he was confused in his dreams but they failed to comprehend.  And God caused them to enter into hell-fire during their lifetimes and in their deaths, for they did not achieve any victory.

Say: In these verses there are clear expositions on the part of God, unto the Tha who is yielding fruit which is evident. Verily, I bear witness that He, no God is there except Him, and that Ali before Muhammad is his proof (hujjat), and His radiant splendor (diya), both in times past and in those to come.  If I should evidence the living one, such are the letters for his own Logos-self, and all as a result of His Logos-Command, they do operate.  This book is the truth, about which there is no doubt therein, a XX revealed from God, the Living One, the Self-Subsisting.  And His is the Kingship of the heavens and the earth and what lieth between these two.  And all before Him are upstanding???

Sealed, His servant, the Dhikr.(the Remembrance)!