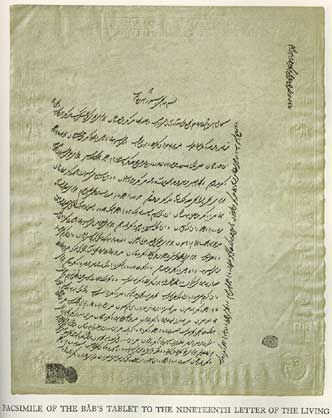 Tablet to the Nineteenth Haykal [Letter of the Living],

This is what We sent down unto the Nineteenth haykal:  The Pleroma ["Fullness"] of all the Haykals [Temples][majma‘ al-hayākil] on the part of God, the Mighty (al-`aziz), the Self-Subsisting (al-qayyum).

In the name of God, the Living One (al-hayy), the Inwardly Mighty (al-musta‘ziz), the One of Talismanic Potency (al-bad[d]uh), the Near at Hand (al-gharib)!

Glorified be He who is one Upstanding (qā’im) according to His Command.   For He knoweth what issueth forth from Heaven and what is sent down on earth, and whatsoever is raised up unto them.

Say: all are from His rustling (khayfat) and Self-Manifestations.  He is the One who rewarded every soul according to what it hath accomplished.

Say: all do fall down prostate before Him.  His is the creation (khalq) and the command (amr) from times past and from times to come (min qabl wa min ba‘d).  And all come to knowledge by virtue of His Logos-Command.

Say: He is one Glorious above every thing.  And He is one Abstracted (al-mumtana‘), one Beloved.   Unto Him belongeth whatsoever is in the Heavens and in the earth, and whatsoever is between these two.  And all on account of His humility (khashiyat) do indeed experience compassion.  He is God, no God is there except Him.

Be ye fearful before the letter “Tha', towards the nineteenth letter, the fullness of all the Haykals (Embodied Temples).

So bear witness that He is indeed no God is there except Him, the King, the Most Holy (al-malik al-quddus [Q]).  He is the one who knoweth whatsoever is in the heavens and in the earth, and whatsoever is between these two. And all express His exaltedness (‘āyihi) when confronted with those befittingly aware (li-ma‘rifun).  Unto Him belongeth the bounty and the grace from times past and from times to come. He hath ever selected whomsoever He willeth.  And unto Him belongeth whatsoever He has originated and will originate within the Heavens and the earth and all do act according to His logos-command. He is the one who bringeth to life and causes to die.  Then he bringeth to life through His Bounty in whatsoever manner He willeth.

Say: all at His Terror are rendered fearful.  He is God, no God is there except Him, the One Learned, the Concealed, and the One Evident, the Living One, the Self-Subsisting.  He is the one who rendered victorious whomsoever He willeth through His Logos-command. Say: We are all on account of the Bounty of God made to be ones who pose questions.

Bear witness unto God Thy Lord, for He indeed, no God is there except Him, the King, the Powerful.  And this to the end that Thou should indeed arrive at the Command of God Thy Lord unto all things, a bounty before Him and a bounty on His part, no God is there except Him.  All are indeed raised up unto Him.  And unto Him is the rulership of the heavens and of the earth, and all do return unto Him.  He is the one who offers compassion (shfq) unto him all who are in the heavens and on the earth, and all do adopt a position of servitude before Him.

Then He before whom they do adopt a state of pious God-fearing.  He is the one who created you from a single element (ansar wahida) although you offer tyranny and He indeed hath come with the Cause of God, your Lord, although most of the people have failed to attain certitude about this.   Indeed, most of them have assuredly gone astray, for they shall never come to understand.  He is the one who will never reward him with anything in the lahut of the might of kullu shay.  For all before Him stand in servitude (‘ābidūn).