The Bab and Judaism I : The Bab and Persian Jews of the Early Qajar period, Shiraz, Bushire and elsewhere

The Bab and Judaism I :

The Bab and Persian Jews of the Early Qajar period,  Shiraz, Bushire and elsewhere

JEWS, CHRISTIANS AND THE BĀB, PART I

Having outlined the career of the Bāb and given a few hints as to the nature of his teachings attention may now be turned to the question of his possible contacts with Jews and Christians and to their alleged influence upon him.

In the 12th cent. CE Shīrāz,  the birthplace of the Bāb and of Bābīsm, had a Jewish population of almost 10,000 (so Benjamin of Tuleda). It was, from the 14th‑16th centuries CE, a great center of Persian‑Jewish culture. 1 But by the 19th cent., and, following the restrictions, harassment and forced conversions which accompanied and followed the establishment of Shī`ī Islām during the Savafid period (1502‑1722 CE), the Shirāzī Jews for the most part lived in a state of abject poverty. Throughout the Qājār period (1794‑1925 CE) they were subject to continual derision and persecution their numbers having dwindled to from between (perhaps) 2‑3,000 (late 1820's) to (perhaps) 5,000 (in 1897), at times falling considerably below these figures. 2

Joseph Wolff (1795‑ 2nd May 1862), Christian missionary to the Jews, visited the Jewish quarter in northwest (old) Shīrāz in December 1824. He was moved to tears over those poverty‑stricken Jews who begged him for money and for the Gospel in Hebrew. 3 Like the few other Christian missionaries who visited these Jews in the first half of the 19th century, Wolff's efforts had little or no impact on a community largely ignorant of Christianity and subject to Muslim harassment.4 Indeed, between c. 1825 and c.1835 CE fairly large numbers of them were forcibly converted to Islam. 5 Rabbi David d'bet Hillel reported such forced conversions shortly before 1827 6 while Israel Benjamin, perhaps referring to the same event (or other forced conversions a few years later?), noted the forced conversion of some 2,500 of the 3,000 Shīrāzī Jews. 7 Though, in consequence, the no less than nine synagogues of the Jadīd al‑Islam ("new Muslimsl") fell into disrepair, many, at least initially, remained crypto‑Jews or "marranos", 8 They, according to H.A. Stern, who also alluded to the forced conversions, formed the bulk of the silk merchants in the Vakil bazaar in Shīrāz. 9 The same writer noted the condition of those who refused to convert and who had not left Shīrāz (apparently 400 Jewish families); they led miserably poor lives in the squalid Jewish quarter as charm or amulet makers, fortune tellers, hawkers and owners of secret drinking houses (see ibid, 123‑8 and esp. 129).

Būshire was the home, during the first half of the 19th century, of something like 200‑800 Jews (the total population being between perhaps, 2‑5000) 1 In November 1824 they were visited by Wolff who recorded his conversations with their then president Rabbi Yesriel and with other leading Jews. The diary notes in Vol. III of his Missionary Journal make it clear that at this time there were a number of Rabbis among these Jews who had a good knowledge of the Hebrew Bible and who did not hesitate to interpret it in a mystical and qabbalistic fashion. They, like many other Iranian Jews, anxiously awaited the advent of the Messiah and lamented the condition of their oppressed brethren. Unlike most other Iranian Jews they enjoyed a certain measure of freedom and protection. This, in part, due to the British presence in Bushire which contributed to the safety and wellbeing of a community described by Wolff (in 1824) as being composed of "either goldsmiths or brokers". Though "poorly dressed" they were undoubtedly much better off than the Jews of Shirāz. 2

In 1828 Būshire became the home of members of the family of Sassoon ibn Sālih (1750‑1830) for many years the chief banker or state treasurer to the Ottoman governor at Baghdad, nasi of the Jewish community there, and a wealthy merchant.3 His son, David Sassoon (b. Baghdad 1792 d. Bombay 1864), who accompanied his father to Būshire where he engaged in trade between 1828 and 1832, subsequently settled (in 1832) in Bombay where he established the famous David Sassoon and Co. ‑‑which, in due course, had many branches; for example, in Calcutta, Shanghai, Canton and Hong Kong 4 ‑‑ and where he took up trading and banking activities.5 Members of this Sassoon family and other Jewish merchants resident at Bushire after the 1820s were engaged in the opium trade and the export of silk and woollen cloth. They participated in the trade along the Persian Gulf as well as the Indian trade to Surat, Bombay and Madras.6.

The German born Anglican missionary, Henry Aaron Stern (b. Unterreichenbach, 1820 - d. Hackney, London, 13 May 1885), preached to the Jews of Būshire in l848. He found them largely ignorant of religion (as he conceived it) and making up a smallish proportion of an estimated total population of 2,000. When he succeeded in converting Mulla Eliyahu, one of their more learned Rabbis, the Jewish community induced the Muslim Governor to have this Jewish convert (to Christianity) imprisoned. The British were later instrumental in securing his release (Stern, 1854:85‑7). This clearly implies that they exercised considerable local influence. 10

Between and around and Būshire in the 1st half of the l9th cent. there were, it may be noted here, other communities of Jews. Wolff in early 1825 found 30 families of Jews at Zarqun (about 20m NW of Shiraz), 20 families at Kazerun and 30 families at Boruzjan (on the 180 or so mile route between Būshire and Shīrāz; refer, MJ:III:22ff).

كازرون  , A city in Fars Province, Persia-Iran, not far from Shiraz. 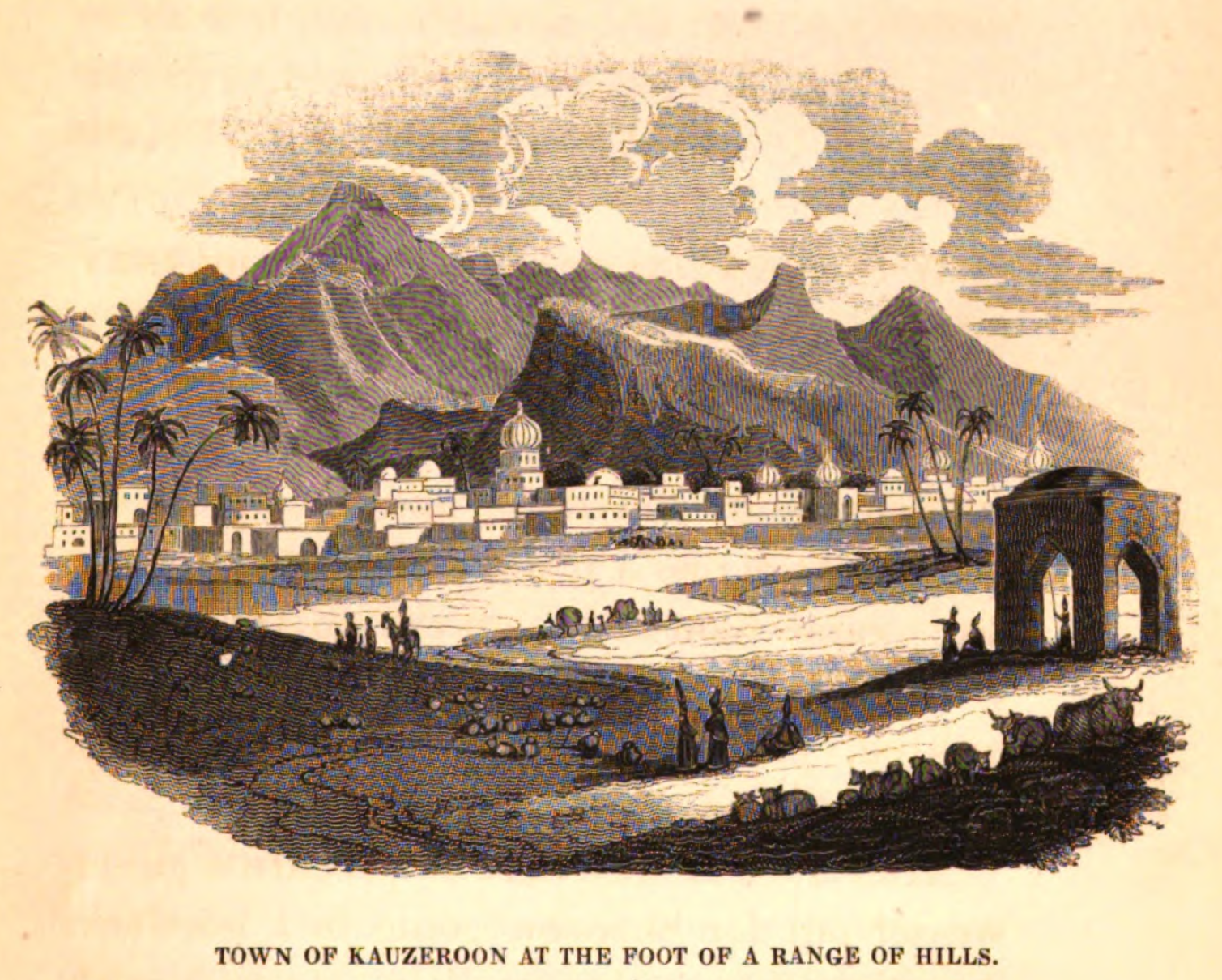 "The population of Kauzeroon [Kazerun] is estimated at about six hundred Moslem families, all Sheeahs [Shi`ah], and forty Jewish ones, who are still more poor and wretched than the rest. It is difficult indeed to describe how this race is despised, oppressed, and insulted, throughout all Persia; their touch being thought so unclean, as to render complete purification necessary on the part of the defiled. The few Jews here live as pedlars, and go in little parties on foot, carrying their loads of Indian spices on their backs, between Bushire and Shiraz. The principal occupation of the more wealthy Moslems is the purchase and sale of horses for the Indian market, and raising a cross-breed between the Turcoman and Arab race, which are called, from the name of the place, Kauzerooni [Kāzerūni], and are celebrated for their excellence as journeying, or road horses, but are inferior to the Arab in beauty, and to the Turcoman in strength. The lower orders of the people live by their humble labours; but among them there is no manufacture, except a particular kind of shoes made of plaited cotton, almost in the same way as ladies' straw-bonnets are made in Europe, and admirably adapted for strength and comfort to the wearer. These are made also in other parts of Persia, but are nowhere so good as here" (Buckingham, 1830, II:76-77),

Citation above (and image) from Buckingham, James Silk (1786-1855), Travels in Assyria, Media, and Persia, including a journey from Bagdad by Mount Zagros, to Hamadan, the ancient Ecbatana, researches in Ispahan and the ruins of Persepolis, and journey from thence by Shiraz and Shapoor to the sea-shore. Vol. II. London, H. Colburn, 1830, p.XXf .

Unmentioned by Calmard in the above article is the English missionary Henry Martyn's brief note about K in his Memoirs ...ADD

Around 1825 in his Missionary Journal (III:Xf) Joseph Wolff describes the Jews of Kazerun in the following manner : "The Jews of Kazerun, a few of whom spoke Hebrew, were extremely poor ‑‑ they anxiously awaited the coming of the Messiah whom they thought would restore their recently destroyed ‑‑ by an earthquake ‑‑ homes, schools and synagogue. One of their learned men, Mulla David, said to Wolff, "We are now exiles on earth, and there are no people on earth so troubled as we are: we are considered as less than dogs and the Gojim [Gentiles] the Persians, trample upon us.. We must earn our livlihood by telling lies ‑‑ by writing talismans in fictitious characters and telling them [the Muslims] that they are written in Hebrew." (ibid.,p.33.)

By the time the German born Anglican missionary Henry Aaron Stern (b. Unterreichenbach, 1820 - d. Hackney, London, 13 May 1885) visited these Jews in 1848 (he estimated their number at 100) they were somewhat better off. Though most of them were still engaged in fortune-telling and the writing of talismans for their Muslim neighbours, a few had acquired some wealth by dealing in `antiquities' (see Stern, 1854:114‑5).

The Jews of Boruzjan were also very poor. Wolff (in 1825) visited their two small synagogues and thought that "everything about them is witness to their poverty and misery" (op. cit. III: 22). Stern, about 22 years later, noted that their only book was part of a Hebrew Bible given to them by Wolff. He described their synagogue as "a dark miserable hut, consisting of four bare walls, and a broken, uneven clay floor". He brought the miserable condition of these Jews (estimated as 10 families) to the attention of Muammad usayn Khān the Governor who was amazed that anyone should be bothered about them (refer, Stern, 1854:109‑110).

The Bab and Mercantile Family Contacts.

If in the light of the foregoing it be asked whether or not the Bāb and his family had contact with the Jews of Shīrāz and Bushire and elsewhere, it would seem highly likely that an affirmative answer should be given.1 The young Bāb doubtless frequently came upon Jews and crypto‑Jews or Jadīd al‑Islam who, like his father and uncles, were engaged in similar trade in the Vakīl bazaar in Shīrāz. 2 The house of the Bāb in Shīrāz and other residences associated with his early years were situated very near the Jewish quarter (mahalla)  in Shirāz ‑‑ a synagogue was located a very short distance from the Bāb's house in Shīrāz.3 During the five year period of his mercantile activities in Bushire, the Bāb very likely had business contacts and dealings with Jewish merchants. Like some among them he participated in the Indian trade (dealing, among other things, in tea, silk and indigo [nīl] and having trade links with , and , etc. He, or members of his family, almost certainly had links with members of the Sassoon family during their residence in Bushire and after their taking up residence in Bombay ‑‑ intimate links certainly, a few decades later (l86O's > ?) existed between certain members of the Afnān family  (descendants of certain relatives of the Bāb) and leading merchants and members of the Sassoon family.4

That the Bāb had contact with the Jews of Shīrāz has been asserted by a few of the earliest European writers on Bābīsm. The French diplomat and writer Joseph A. Comte de Gobineau (1816‑1882) in his Les Religiones et les Philosophies.. ( 1865) and the Italian physician Michele Lessona (1823‑94) in his I Bābī  (written 1860's ? Pub. 1881; probably drawing on Gobineau) both state that the Bāb had contact with the Jews and Zoroastrians of Shīrāz and had read the New Testament in Persian translation.1 Though this tradition may have originated in Muslim circles, being intended to underline the inferior and derivitive nature of the Bāb's teachings, it no doubt enshrines some truth 2 The Bāb's very probable mercantile links with Jews may well have made his attitude towards them more liberal than those of orthodox Shī`ī Muslims who viewed them with suspicion or contempt and regarded them as unclean (najis).