To the Ninth Haykal / Letter of the Living, Shaykh Sa'id / Sa'en-i Hindi of Multan 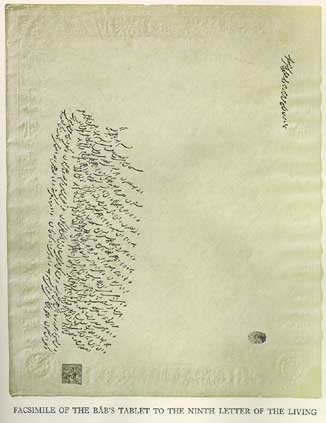 To the Ninth Haykal / Letter of the Living, Shaykh Sa'id / Sa'en-i Hindi  of Multan, India-Pakistan.

To the Ninth Haykal / `Letter of the Living', Shaykh Sa'id / Sa'en-i Hindi  of Multan [India-Pakistan]

"This is that which was sent down unto the Ninth who believed in God (al-tāsi` man āmana) and in His verses. And very few of the people (qalīl an min al-nās) have come to understand" (Dawn-Breakers, XX).

In the Name of God, the Most Manifest (al-aẓhar), the  Eminently Clear (al-mubīn)

[1] Glorified be He before whom all are humbled, whomsoever is within the heavens or upon the earth and whatsoever lieth between these two.

[2] Say: All are now proximate unto God! [3] He is the One Who guideth whomsoever He willeth by means His Logos-Command (amr).

[4] Say: All by virtue of His Bounty (jūd) are able to make enquiry.

[5] Say: He is One Powerful (al-muqtadir) above everything (kull shay'), [6] No God is there except Him, the Help in Peril (al-muhaymīn), the Self-Subsisting (al-qayyūm)!

[1] His is whatsoever is within the heavens and upon the earth and whatsoever lieth between these two, the Most Pre-Eternal (al-a`zal) the Pre-Eternaled (al-ayzūl) [sic,]. [2]  God testifieth that He, no God is there except Him [3] for all before Him do draw nigh!

[1] This is a missive (book, letter] (kitāb) from before [the letter] al-Thā' [ = Thamarah, the Fruit, the Bab], the Fruitful (al-muthmir), the Fruit-Laden [Fruited] (al-thaymūr) [sic] unto the Ninth who believed in God and in His verses (al-tāsi` man āmana). So testify that He, no God is there except Him, the Help in Peril (al-muhaymīn), the  Empowering (qaydūr) [sic.]!

[1]  Unto Him belongeth the Dominion of the heavens and of the earth and whatsoever is betwixt these twin [2] such as the Celestial Throne (al-`arsh). [which is] the One Upraised (al-marfū`)! [3] God testifieth that He, no God is there except Him. [4] He createth whatsoever He willeth through His Logos-Command (al-amr), [5] No God is there except Him, the Exalted (al-aliyy), the Glorified (al-sabbūḥ).

[1] Say: He is One Victorious (al-ghālib) by virtue of His Logos-Command (al-amr), [2] both from times past and for times to come (min qabl and min ba`da). [3] No God is there except Him, the Supremely Powerful  (al-muta`azziz), the Beloved One (al-maḥbūb).

[1] Say: Fear ye God! O thou Concourse anong the company of the Bayan (ma`shar al-bayān)! [2] Then turn ye towards Me and be ye purified before Me [3] for I am indeed a Mirror before God (mirāt li'llāhi), my Lord,  wherefore should all reorient themselves!

[1] And I, I am indeed the Living One (al-ḥayy) in the Supreme Horizon  (al-ufq al-a`la)! [2] Wherefore do I hearken unto that which  thou supplicate! [3] I do observe whatsoever deeds thou commit! [4] It is not for any questioner that they should question Me  regarding the Bayan except that God, the Powerful (al-muqtadar), the Pre-Existent (al-qadim) should permit a response!

[1] Say: In His hand is the Jabarūt (Omnipotent Realm) of the Hāhūt (Apophatic Realm) of "All things" (kull shay')  and all shall be gathered unto Him. [2] Unto His belongeth  (lahu)  the Victory (naṣr) pertaining to the heavens and the earth for He giveth victory to whomsoever He willeth by means of His army (jand).

[1] Say: All by virtue of Him are rendered victorious (nāṣirūn)! [2] He is indeed One Powerful (qādir) by virtue of His Logos-Command (amr). [3] He is assuredly One who carrieth out whatsoever He willeth. [4] He is One Powerful (al-muqtadar), the Empowered (al-qaydūr) [sic.].

[1]  These [victorious ones] are such as have believed in Thee in the Book (al-kitāb)! [2] We indeed do make mention of them as a Divine Bounty (fadl an) which cometh from Us perchance they may be reckoned among such as befittingly recollect (dh-k-r V) [relate to the Dhikr] [3] And such as outstrip (s-b-q cf. the sabiqun, the "forerunners") with respect to [the receipt of] a Mercy (raḥmat)  from His Lord, are assuredly to be numbered among those truly sincere (al-mukhliṣūn).

[1] And whomsoever placeth trust in Him according to a befitting measure,  shall indeed be reckoned among those especially trustworthy (al-mutawakkilūn). [2] Such shall indeed be magnified both from times past and for times to come (min qabl wa min ba`da) for they shall act accordingly. [3] Relative to all [flight of] steps [stairs, stages] (darajāt) that incline towards God, thy Lord, shall they ever be led to turn back towards Us. [4] Yet We shall never come to give a reward for anything other than this [pathway], whether it pertain to the heavens or to the earth.

And We are assuredly Weighty in Knowledge (`allām)!

We created "All things" [everything] (kull shay')!

We, we are indeed among those especially Powerful (muqtadirūn)!

[XI] : [3] And We are indeed are their Felicity [Bliss, Rapture of Paradise]  (al-na`īm)  promised by Us in the Book (al-kitāb) [Qur'an  9:21 etc]! This is not the correct reading but nonetheless something of a parallel of interest.

"Jesus son of Mary said, "O God, our Lord, send down to us a "Table" (ma'idah)  from heaven (al-sama') which may be a festival (`īd an)  for us, for [all our generations] present and future,(al-awwalinā wa ākhirinā) and a sign (ayat an) from You (minka), and give us provisions (arzuq-nā). You are the best Giver of Provisions (khayr al-raziqīna).”