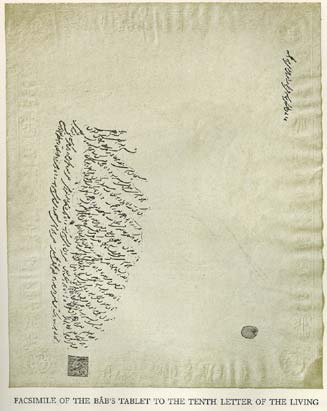 "This is that which We sent down unto the Tenth Haykal (Temple, Persona) in the Book (al-kitāb), a Command (amr) from before God, the One Praised (al-ḥamīd),"

In the Name of God

[1] Glorified be (subḥān) He Who mesureth out the Destinies (muqādīr) of "All things" (kull shay') by means of His Logos-Command (amr), the [Qur'anic creative imperative]   كُنْ فَيَكُونُ "Be!" and it is! [Q.2:117; 3:47, 59, etc]! [2] He is the One Who knoweth whatsoever is in the heavens and the earth within a Book [Ledger] (kitāb) which thou have not been able to witness! [3] It is not a Book (kitāb) save it is  this one for it is a Book ornamented (mustarraz), hidden away (maknūn)! [4] God Himself did indeed cause it to be secreted away with the Hands of His Power (qudrat), no God is there except Him, the Mighty (al-`azīz), the One Beloved (al-maḥbūb).

[1] This is a Book  (kitāb) from before [the letter] al-Thā' [= Thamara, the Fruit, the Bab] unto the Tenth Haykal (Embodied "Temple", Persona). [2] So bear witness that He, no God is there except Him. [3]  All shall return (r-j-`) unto Him both from times past and for times to come (min qabl wa min ba`da). [4] And all shall be gathered together unto Him. [5] He is the One Who giveth life unto whomsoever He willeth through His Logos-Command (amr).

[1] Say: All as a result of the fear of Him do maintain fearfulness (khā'ifūn). [2] He is the One Who determines whatsoever He willeth on account of His Logos-Command (amr).

[1] Thou shall indeed Command all that they should act according to the Decree [Directive] of God (ḥukm Allah). and not be numbered amongst the unbelievers (al-mushrikīn). [2] Such is part of the Utterance (qawl) of the True One (al-ḥaqq). [3] We sent this down on Our part for We, we are indeed among such as are given to  divine revelation (manzilīn). [4] Unto God belongeth whatsoever is in the heavens and the earth and whatsoever is betwen these twain.[5] No God is there excpt Him, the Elevated (al-aliyy) and Mighty (al-`azīm).

[1] Say: Unto Him belongeth whatsoever is in the heavens and the earth and whatsoever lieth between them. [2] He is assuredly One Mighty (`azīz), One Self-Sufficient (ghaniyy).

[1] Such indeed moveth towards God  (ila Allāh), Our Lord and thy Lord, as happened in  times past and [will happen] for times to come (min qabl wa min ba`da). [2] He is indeed the Beautiful (al-jamāl), the Beauteous (al-jamīl).

[1] Say: He is the One Who prostrateth before Him, whomsoever is within the heavens or upon the earth and whatsoever is other than these two. [2] He assuredly is the Who Generates Singularity [Uniqueness] (al-farrād), the  One Elevated (al-rafī`).

His Servant , the [messianic] al-Dhikr (Remembrance).