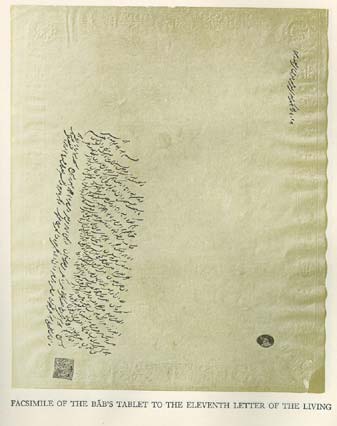 "This is that which We sent down unto the Eleventh Haykal (Embodied "Temple", Person) who hath believed in God and in His verses, a Logos-Command (amr) from the All-Powerful (al-muqtadar), the Generator of Learning (al-`allūm)." (Dawn-Breakers, XX).

[1] Praised be to God Who had indeed created the heavens and the earth by means of His Logos-Command (amr). [2] And these [Letters of the Living] are they who have believed in God and in His verses. [3] Such are those who are in the Riḍwān (Realm of Contentment, "Paradise") as ones who are  Immortals (al-khālidūn). [4] Therein shall be ennumerated all that their souls desire [cf. Q, 21:102; 34:54, etc ishtaha VIII].

[1] Therein [furthermore, some assert] is the [messianic] Qā'im ("Ariser" of the family of Muhammad; in occultation], a True One {Reality] (haqq) as would be known  if persons were befittingly aware! [2] Yet these [latter] ones are such as have disbelieved in God and in His verses for these are such as are present within Hellfire (al-nār). [3] God shall assuredly reward them with the blazing hellfire  (ḥarr al-jahīm). [4] Such accords with a Logos-Command from before Him. [5] No God is there except Him, the Powerful (al-muqtadar), the  Manifested (al-ayẓūm) [sic.].

[1] This is a missive (book, letter] (kitāb) from before [the letter] al-Thā' [ = Thamarah, the Fruit, the Bab] to the Eleventh Haykal (Embodied "Temple"). [2] So bear witness that He, no God is there except Him, the King (al-malik), the Praised One (al-maḥmūd). [3] He is the One Who, in very Truth, sent down the Book (al-kitab) about which there is no doubt! [4] All before Him are Muslims, ones submitted [to God] (al-muslimūn).

[1] Say: These verses are Expositions (bayinnāt) from before God, the Living One (al-ḥayy), the Self-Subsisting (al-qayyūm)!

[2] Say: Such is a Proof (ḥujjat) which is sufficient for the denizens [people] the heavens and of the earth and whatsoever lieth between them if that is thoushould  be reckoned among such as are possessed of equity!

[3] Say:  If such the people of the heavens and of the earth should gather together to produce the likeness of these verses (āyāt), it would prove an impossibility and would never be capable of realization even they were all   learned ones (`ālamūn).

[4] Say: Such is a Proof (ḥujjat) is that which God hath specialized to His Own Logos-Self (bi-nafsi-hi)! [3] He, verily, no God is there except Him, the Help in Peril (al-muhaymīn), the One Supplicated  (al-dayy`ūm) [sic.]!

[1] Say: The Eighteen Letters [ of the Living] (al-ḥurūf) are indeed from before God (min `ind Allah), the One Mighty (al-`azīz), the One Mighted (al-`ayzūz)! [2] God hath indeed assembled (r-k-b II) them to a degree that all of them are Beloved (ḥabīb)  save that is to those persons characterized by weakness (`ājizūn).

[1] Say: This is something Divinely revealed  (tanzīl) on His part for He beareth witness that He is indeed One Powerful (al-muqtadar), the Fate-Generating {Empowering] (al-qaydūr) [sic.]. [2] He is the One Who sendeth down whatsoever He willeth through His Logos-Command (amr) [3] [And this is] more effective [proximate, swifter] than that He should utter unto Him the [Qur'anic creative imperative]   كُنْ فَيَكُونُ "Be!" and it is! [Q.2:117; 3:47, 59, etc]!

[1] Say: He is One Irresistible {Overpowering, Wrathful] (al-qāhir) over whatsoever He willeth. [2] No God is there except Him,  the  One Learned (al-mu`aylim), the Glorified (al-sabbūḥ).

[1] Say: He is the One who hath indeed surrounded "All things" (kull shay') with His Divine Bounty (faḍl).

[1] Say: We are on avvount of His Divine Bounty (fadl) may make enquiry [ask questions]!

[1] God testifieth that He, no God is there except Him, [2]  Man yuẓhiru-hu Allāh (Him whom God shall make manifest) is expressive of every Theophany [all of His Dispensations] (kull ẓuhūr). [3] This both from times past and for times to come (min qabl wa min ba`da). [4] The Proofs of the Living One (adillā' al-ḥayy) are  Letters (ḥurūf) which are before Him. [5] All do act according to His Logos-Command (amr).

[1]  Directed towards Him is the Praise (al-ḥamd) for We have indeed been aware of His Own Logos-Self (nafs) which is a Divine Bounty (faḍl an) originating with Him. [2] No God is there save Him, the Supremely Gracious (al-muthafaḍḍal), the Sacredness  (al-qaydūs) [sic.]!

His Servant the [messianic] al-Dhikr (the Remembrance).