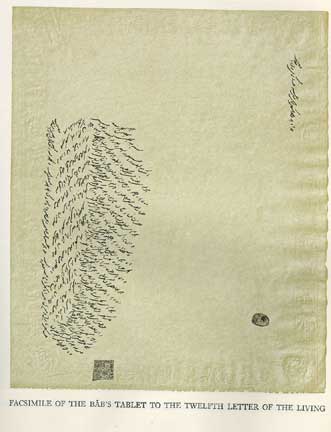 Marāgheh, where the 12th Letter of the Living originated, is an ancient walled city on the on the Safi River situated in Iranian Adherbayjan (NW Persia) located in a narrow valley 30km to the west of the salt water Lake Urmia,  It was and is the site of the Marāgheh observatory constructed under the direction the Ilkhanid ruler, Hülagü Khan (r. 1256–1265) for Abū Jaʿfar Muḥammad ibn Muḥammad ibn al‐Ḥasan, Naṣīr al‐Dīn al‐Ṭūsī (1201– 1274).

"This is that which We sent down unto theTwelfth Haykal (Embodied "Temple", Person) within which is a Memorial (dhikra) and a Light (nūr an) for all the worlds (li'l-`ālamīn)",   (Dawn-Breakers, XX).

[2]  He is the One Who raised up (b-`-th) within the Dominion (al-mulk) a Servant (`abd an) [the Bab] and enabled him to Cry out unto his Forefathers [forebears] (bi-ābāt) [3] to the end that he might fill up the heavens and the earth and whatsoever lieth between them [with the words], [4] `There is none other God but Him and the Letters (ḥurūf) which are the "Three Letters [= `Ali] before the Four [Muhammad]" [= the Bab, `Ali Muhammad Shirazi] are His Proof (ḥujjat) and His Splendor-Glory (bahā') on the earth  [5] and   the Proofs of the Living One (adillā'  al-ḥayy) are such Letters as are representative of His Logos-Self  (ḥurūf li-nafs) [6] for all do act according to His Logos-Command (bi-amr)'. [7] He is the One who makes manifest in later times (min ba`da) the like of what was manifest aforetime (min qabl)!

Be ye assured [Fear ye God] that there is none other God (ilāh) but God (Allāh).

[2] Say: All before Him do fall prostrate!

[4] Say: Hereabouts are all upstanding (wāqifūn) [positioned for judgment] before Him!

[1] This is a missive (book, letter] (kitāb) from before [the letter] al-Thā' [ = Thamarah, the Fruit, the Bab] to the Twelfth Haykal (Embodied "Temple"). [2] So bear witness that He, no God is there except Him, the Living One (al-ḥayy), the Self-Subsisting (al-qayyūm)!. [3] Wherefore is it the case that there is none other God but Him [4] and that Man yuẓhiru-hu Allāh (Him whom God shall make manifest) is His [messianic] Proof (ḥujjat) on earth [5] and that the Proofs of the Living One (adillā'  al-ḥayy) are such Letters  (ḥurūf) as are representative of Him [6] for all, by virtue of His Logos-Command (amr), do decree as accords with Wisdom. [7] Unto Him belongeth whatsoever is within the heavens and upon the earth, be they ones willingly obedient (ṭaw`ā) or painfully unwilling [reluctant] (karhā) [Q. 3:83; 13:15; 31:11. cf. 46:14] for all do eventually turn back towards Him

[1] He is the One Who bringeth alive and who maketh to die. [2] Then He creates through His Divine Grace (faḍl) in whatsoever manner He willeth.

[1] The Point of the Bayān (Exposition) (nuqṭat al-bayān) is His Theophany [Manifestation] (ẓuhūr) in every Cycle (kawr/kūr) and Dispensation (dawr/dūr). [2] Of this all may be certain thereof! [3] He is One Upstanding [the Qā'im] above every soul (`ala kull nafs) for He knoweth what it hath comitted. [4] He is indeed One All-Informed (al-allām), One Secreted Away (al-ghayūb)! [sic.].

[1] Say: Through the Hand of God (bi-yad Allāh) is whomsoever is within the heavens and on the earth and whatsoever lieth between these two for all shall indeed draw nigh unto Him.

[2] So Blessed be (tabāraka) be He Who is our Lord! [3] both from times past and for times to come (min qabl wa min ba`da) [4] for all shall indeed render service unto Him.

[1] Say: He is the One in Whose Hand is the Kingdom (malakūt) of the Lahūt  (the Divine Realm) of "All things" (kull shay'), [2] And all unto Him on the [eschatological] Day of Separation (yawm al-faṣl) shall come to turn aside!

[1] And Man yuẓhiru-hu Allāh (Him whom God shall make manifest) exists thereon, representative of the True One (fihi  la[i]-ḥaqq) as would be evident if the people were sufficiently informed.  [2] God testifieth that He is indeed the True One (la-ḥaqq) as befits the True One (`ala al-ḥaqq) [3] both from times past and for times to come (min qabl wa min ba`da) [4] for all were indeed promised with respect to Him!

[1] There is none other God (ilāh) but God (Allāh). [2]  Say: All shall indeed return (r-j-`) unto Him. [3] Then Exalted be God, thy Lord! and the Lord of "All things" (kull shay'), above everything that was and will come to be sent down. [4]  Say: We do all seek forgiveness [crave pardon; gh-f-r X] of Him for He is indeed the [latter-day] Reckoner [Judge] (ḥusbān), [5] from times past and for times to come (min qabl wa min ba`da). [6] And We are of God and We shall assuredly be numbered among such as turn back towards Him!  [7] And Praised be to God, Lord of the heavens and of the earth and Lord of all the worlds!

"Seek they other than the religion of Allah, when unto Him submitteth whosoever is in the heavens and the earth, willingly (ṭaw`ā) or unwillingly (karhā), and unto Him they will be returned". (Pickthall trans.)