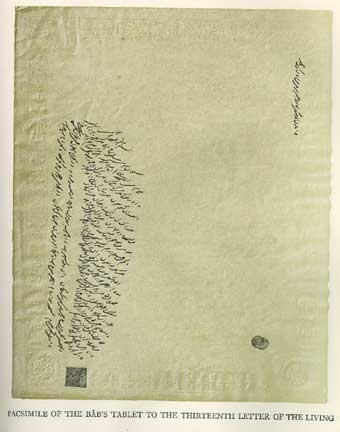 Tablet to the Thirteenth Haykal / Letter of the Living,

Tablet to the Thirteenth Haykal, `Letter of the Living',

"This is that which We sent down unto theThirteenth Haykal (Embodied "Temple", Person) a revelation (tanzīl) from before Us and of this We are indeed witnesses (shāhidīn), (Dawn-Breakers, XX).

[1] Glorified be (subḥān) [God] He Who generated "Thingness" (yashayya' = shay' II ; the multiplicity of proto-existence) just as He Willeth through the operation(s) of His Logos-Command (amr). [2] Say: All relative to His verses (āyāt) become Dhikr (messianic Remembrance) related (dhākirūn)! [3] He is the One Who bore witness unto that which the servants (al-`ibad) came to know. [4] He is the One Who hath a knowledge of the gnosis (`ilm) of the heavens and of the earth and of everything -"All things" [the Pleroma-Fullness] (kull shay', abjad 361) - which are within a Hidden Book [Ledger] (kitāb maknūn)!

[1] Say: That Ledger [Book] (dhalik kitāb) had indeed been Treasured up within the Veils of the Unseen (hujub al-ghayb) [as would be clear if thou were to be numbered] among such as are informed!

[2] Say: That Ledger [Book] (dhalik kitāb) can never been seen except by those who are sincere (al-mukhlisūn).

[3] Say: That Ledger [Book] (dhalik kitāb) can never be  touched save by such as are befittingly Pure (al-safūn)

[4] Say: That Ledger [Book] (dhalik kitāb) can never be witnessed save by such as are among the especially Learned (`ālimūn) ,

[1] Say: That Ledger [Book] (dhalik kitāb) can never be taught [save as/ for it is], a Wāḥid (a 19 related cosmic "Unicity") descending [revealed] (tanzīl) from God, the Beloved of all the worlds (maḥbūb al-`ālamīn)!

[2] Will ye not then strive with respect to this novel phenomenon (dhalik al-hadith)? It is not for thee either  to know or to comprehend!

[3] God testifieth that He, no God is there except Him!

[4] Say: All before Him are among those [resurrected] raised up!

[1] This is a missive (letter, book] (dhalik kitab) from before al-thā'  [=Thamarah, the Fruit = the Bab] unto the thirteenth Haykal (Temple, persona) [recorded] in the Book (al-kitāb). [2] So bear ye witness that He, no God is there save Him, the Mighty (al-`azīz), the One Described (al-mawṣūf) [cf. Q. 6:139]. [3] He is the One Who never  rewardeth anyone [attempting to describe Him] with anything in the Lāhūt (Divine Realm) of the heavens and of the earth or whatsoever lieth between them, [for He is] the Supremely Great Ruler   (al-malīk al-a`ẓam), the One Greated (al-ayzūm) [sic.].  [4] Unto Him belongeth the Supreme Beatitude [Salvific Power; Quintessential Islam] (aslam) within the [realm of] the `Izzūt ("Mightyness"; cf. Lāhūt etc) of the Pleroma (the cosmic "Everything" (kull  shay').

[1] And He is indeed the Might-Generating (al-musta`azziz), the All-Mighted (al-`ayzūz) [sic.]. [2] Unto Him belongeth the Keys of Mercifulness (mafātih al-raḥmat) in the Kingdom of the Logos-Command and of the Creation (malakūt al-amr wa'l-khalq) [3] for He enables such to descend upon whomsoever He willeth among His servants. [4] Say: We all by virtue of His Divine Bounty (faḍl), are among such as are enabled to make enquiry (sā'ilūn)!

[1] Unto Him belongeth the Dominion (mulk) of the heavens and of the earth and of whatsoever lieth between them [2] for all, at His Logos-Command (amr) are Dhikr (messianic Remembrance) related (dhākirūn)! [3] Unto Him belongeth the Divine Beneficence (jūd) and the Divine Bounty (faḍl) for He singles out whomsoever He willeth to be the recepient of His Mercifulness (raḥmat).  [4] Say: All relative to that are such as do seek (ṭālibūn)!

[1] And, furthermore, unto Him belongeth the cohort [s] (jund) of the heavens and of the earth [2] for He giveth victory unto whomsoever He willeth by means of His Logos-Command (amr) [3] for He is indeed One All-Powerful (al-muqtadar), One Empowered [a Determiner] (qaddūr) [sic.] [4] And unto Him belongeth the Powerful State (al-ḥawl) and  Power All-Sufficient (al-ṭawl) in the Kingdom of the Pleroma [the "All-Things"]  (malakūt kull al-shay') for He is indeed the Help in Peril (al-muhaymīn), the Self-Subsisting (al-qayyūm),

[1] God testifieth that He, no God is there except Him. [2] He generateth whatsoever He willeth through His Logos-Command (amr) with more proximity [speed] (aqrab) than that He should utter [the Qur'an-rooted creative imperative] before Him,   كُنْ فَيَكُونُ "Be!" and it is! [Q. 2:117; 3:47, 59, etc]! [3] And unto Him belongeth the Praise (al-ḥamd) in the Lāhūt (the Divine Realm) of the Might (`izz) of the Pleroma [the fullness of "All-Things"]  (lāhūt `izz kull shay') [4] for all (kull) are indeed prostrate (sājidūn) before Him,

[1] Glorified be (subḥān) [God] He Who generated "Thingness" (yashayya' = shay' II ?? ; the multiplicity of proto-existence) just as He Willeth through the operation(s) of His Logos-Command (amr).  ...

Opening line after Subḥān (Glorified be!) showing the verbal position of sh-y-'  ("thing") with its hamza.  The text most likely presupposes the (non-qur'anic) doubled (with tashdid - not present in the handwriting of the Bab) form or the [normally not used] second verbal form (II) which should indicate an `intensity of action' -  a thing-shay' being empowered or producing something powerful - or `causation' which may mean a "thingness" which is self-generative or causitive. The word, masculine noun  shay'  is frequent in the Qur'an  and would seem to derive from the triliteral root sh-y-' meaning ` to to will. wish, desire, want...etc (see Kassis, Concordance, 1154ff). It should be noted that form II of shay' does not occur in the Qur'an and does not seem to be listed in standard Arabic dictionaries.The 19th century Lexicon of the British lexicographer, orientalist and Egyptologist, Edward William Lane (17 September 1801 – 10 August 1876) includes a stunningly brilliant entry under shay' only a brief extractt of which can be included here: 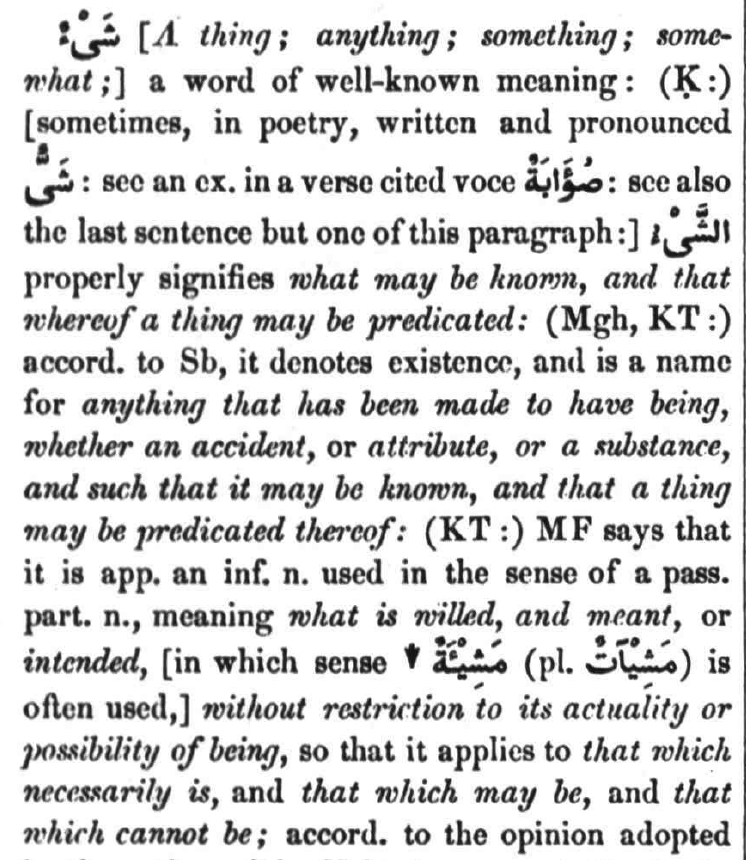 Aside from matters grammatical the noun shay' has an important place in Islamic cosmology, philosophy and mysticism. In this respect attention should be given, for example,  to the writings of Ṣadr al-Dīn Muhammad Shīrāzī or  Mullā Ṣadrā  (d. 1050/1640). A list of key, select passages from the Kitab al-masha'ir ("The Book of Metaphysical Penetrations"), the  Hikmat al-muta’aliyya fi'l-asfar  al-`aqliyya al-arba`ah and other of his writings can be found in Samih Dagheim's Mawsu`at Mustalahat Ṣadr al-Dīn Shīrazī, the  "Encyclopedia of Ṣadr al-Dīn al-Shīrāzī's Terminology" (2 vols. Dharwa al-Qurbi, 1428/2007); see esp. vol. 1 page 495-498  (shay' ; shayiyya ...) and vol.2 page 890ff. (on māhiyyah al-shay' ;  - مَاهِيَّة "whatness"...).  Note also that like Shaykh Ahmad al-Ahsa'i (d. 1241/1826), the Bab was sometimes very critical of Mullā Ṣadrā ,  though he was certainly not uninfluenced by him (see  the references in his 1261/1845 Khutba al-Jidda (Sermon nigh Jeddah) trans. Lambden in Lawson, 2008).

It is of great interest here that the Bab seems to use shay'  as a verb (perhps as the causitive  form II  cf. Mashiyya (The Divine Will) indicative of the empowering of "thingness" as existence (wujud) or quiddity (mahiyya), or both these modes of emergent proto-existence. As a verbal form shay' perhaps indictaes the multiplicity of existence or the existence of multiple things. In the theology of the Bab the Wāḥid, "Unicity" or (loosely, "Oneness" has an abjad value of 19, its 4 letters adding up to 19 : w = 6+ā=1+h=8+d=10 - total 19. when this Wāḥid is squared - 19 x19 - the result is 361 which is the abjad value of kull shay' = k=20 + l= 30 + sh= 300+ y = 10+ hamza = 1 -Total =  361. The centrality of this theology is well indicated in the Persian Bayan and in the very late Lawh /Kitab-i Haykal al-Din (Book of the Temple of Religion, probably June 1850) and its Persian Commentary (similar date).

The Primordial and Messianic Dhikr as the Reality of the Bab.

In the Sharh al-Qasida al-Lāmiyya (Commentary on the Ode rhyming in the Letter  "L" ) of Sayyid Kāzim Rashti and other writings of this Shaykhi leader and of the Bab himself, the Qur'an-rooted term Dhikr (loosely), "Remembrance", "Recollection", etc may, on occasion. indicate a primordial and/ or  eschatological  identification and acknowledgement of the Sublimity of the Godhead, the Divine Originator of everything (kull shay').

[2] Say: All relative to His verses (āyāt) become Dhikr (messianic Remembrance) related (dhākirūn)! [3] He is the One Who bore witness unto that which the servants (al-`ibad) came to know. [4] He is the One Who hath a knowledge of the gnosis (`ilm) of the heavens and of the earth and everything-"All things" (kull shay') - which are within a Hidden Book [Ledger] (kitāb maknūn)!