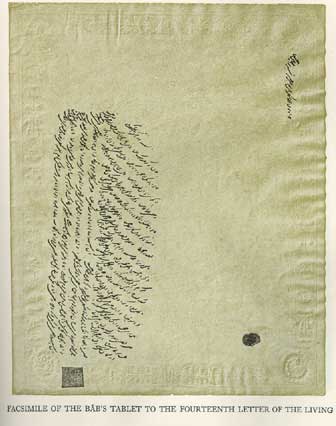 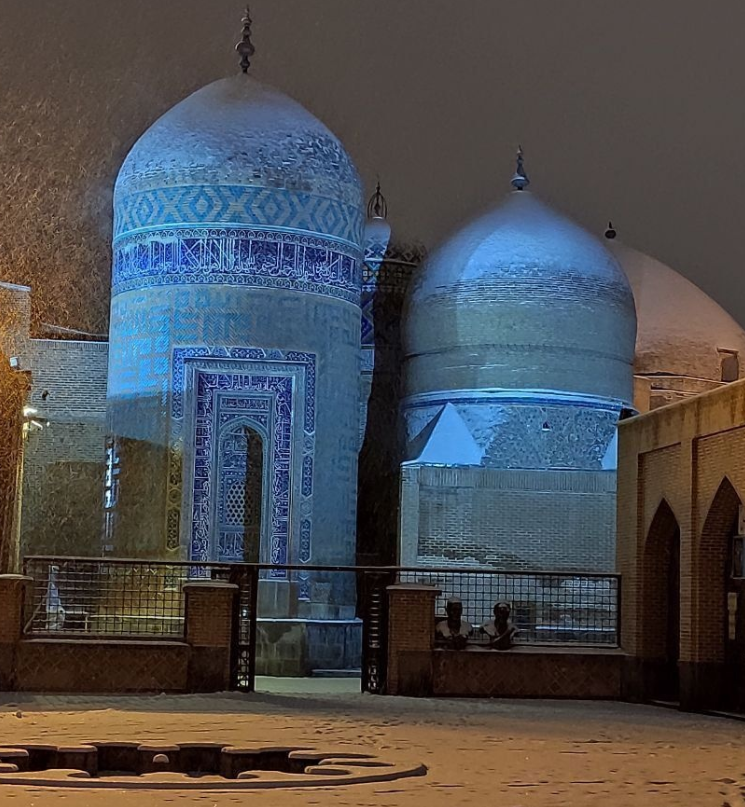 Tablet to the Fourteenth Haykal,

"This is that which We sent down unto the Fourteenth Haykal (Embodied "Temple") within which is a warning ([mundhir an] tandhir an) for all the worlds (li'l-`ālamīn jamī`a an)" (Dawn-Breakers).

the All-Powerful (al-mutakabir), the Exalted One (al-`aliyy/ al-a`la) [Most Transcendent].

of the Countenance of thy Lord, is the One Elevated / `Alī (`aliyy /`Alī) who crieth out,

I was indeed, on the part of God,

the Ḥujjat Allāh ("the Proof of God")

[3] This although they do assert, "We fail to see Thee [the Dhikr / the Bab] save as one possessed (majnūn) although We, We are yet One All-informed (`alīm an)!" [4] Thus saith God in the Book (al-kitāb [the Qur'an]) for these [deniers] are such as forget [have neglected] My Dhikr (Remembrance)!

[1] For these there will be a contempible punishment! (`adhāb an  mahīn an) [2] He saith, "I am He Who representeth God (min `ind Allāh) [2] for I am He who cometh according to the Book! (al-kitāb)". [3] He made Me to be a Pathway of Inestimable Clarity (ṣirāt an  muhīn an). [4] And Praised be unto His Logos-Self, the True One (li-nafsihi al-ḥaqq), in that He comforted Me with His Beneficent Favour (na`mā') for His Divine Grace (faḍl) unto Me was indeed Mighty (`aẓīm an).

[1] Yet do they say, "Thou [the Bab] did naught but cry out anything but falsehood!" [2] Though We, We were assured about its veracity (`alā ḥaqq an yaqīn an ). [3] It was thus until they shut him up in the prison (al-sijn) and they, in every respect from every direction (min kull shaṭr an jami` an), forgot the very Dhikr-Allāh ("Remembrance of God") [the Bab],   [4] And We thus forgot about them just as they forgot about the [Qur'ān promised] Encounter-Meeting with Us (liqā' inā) [God]!  [5] And We, We are One All-Powerful (al-muqtadar an), the One All-Surrounding (al-muḥīṭ an)!

[1] So thou shalt not attempt to flee from His Grasp, for Our Power (qudrat) extends to everything within the Lāhūt (Divine Realm) of the Might (`izz) of the Pleroma, the "All things" (kull shay'). [2] And We, We are, in very Truth (bi'l-ḥaqq), Mighty Indeed (qadīr an)! [3] It will be thus up until We have witnessed the Day of Resurrection (yawm al-qiyāma) when they attempt to shatter Our Covenant (`ahd) having forgottren Our Dhikr (Remembrance) [the Bab] [4] They shall be called to account  as to whether they might be reckoned  possessed of excellence (muḥsinūn)! .

[1] In a deed of true earnestness [in very Truth!] (`amal an)! By God! We shall seize them and We shall assuredly castigate them as on a day whereon they shall not even be something worth mentioning (madhkūr an). [2] We are indeed the Life-giver and We do cause to die [3] The We bestow life according to Our Divine Bounty (faḍl) eve as We willeth! [4] Amd We are indeed the All-Powerful (muqtadar an), the One Elevated (rafī`an).

[1] Such shall it be until We observe that they have killed Our Dhikr (Remembrance) even tough they never came to show shame regarding [what they did to] Us. [2] These were a community (qawm an) [prople] devoid of sulleness (būz an). [3] And We shall deliver them into the hellfire (jaḥīn), [cf. Gehenna] a reward for what they committed in the vicinity of Our Ḥujjat (the messianic "Proof", the Bab). [4] And We, are assuredly Witness (shahīd an) of "All-Things" [everything] (kull shay'),

[1] Say: He hath ordained the [latter-day] Cause (al-amr) through Him [the Bab] whom ye shall cease to remember! (cf. Q. 12:85)!  [2] Yet never shall any Lord (mawla) suffice  over any other Lord of anything  save God bestoweth  Mercy upon whomsoever He willeth. [3] He hath ever been a Watcher [Overseer] (raqīb an) over All-Things (kull shay').

[2] These are the [revealed] verses (āyāt) which are expository (al-bayyīnāt) for the fourteenth Haykal - human Temple  (ila haykal al-rābi qabl `ashara), a Remembrance (dhikr an) from before Us unto all the worlds (li'l-`ālamīn jamī`a an)". [3] I bear witness that He, no God is there except I Myself, the Lord of All (rabb al-kull), One Elevated (al-`aliyy an) [named `Ali].

[1] I created everything (kull shay') for the Day of Meeting, the Encounter with Me (liqā'ī)!  [2] By this is meant the Day of the Encounter-Meeting with I Myself (liqā' maẓhar nafs[ī]), something proscribed [in the Qur'an] (fi'l-shaṭr), Praiseworthy indeed (ḥamīd an)! [3] There is no way in which I might be rendered victorious to any degree, save that  We would reward by means of My Proof (Ḥujjatī), whomsoever is active on the Day of the Uprising (yawm al-ba`ātha) [cf. Q. 30:56], [4] This since I, I was in very Truth,  One Made Manifest (ẓahīr an).

And I, I am indeed God, no God is there except I Myself!

[2] This from time past when there was no before for it (min qabl alladhi la qabl lahu) until times to come when there is no future for it (ba`da alladhi la ba`ad la-hu). [3] And now the Proof (Ḥujjat) is nigh Myself, the very Point of the Bayān (nuqṭat al-bayān). [4] And I, in very Truth,  am a Lord (rabb an) above everything, All-Things (kull shay').

[1] It is not [simply] by virtue of mine own self (nafs) that someone should believe in Him on the Day of His Manifestation (maẓhar) [2] although I Myself would enable Him to enter into Riḍwān ("Paradise") as a reward for having born witness unto My Truth (ḥaqqī), the Manifestation [Theophany] of My Logos-Self (nafsi). [3] I did indeed  Determine [Empower] (qaddār) the heavens and the earth before all the worlds (li'l-`ālamīn), as a Lord (rabb an), One Pre-Existent (qadīm)!

Furthermore, O thou people of the Concourse (ahl al-malā')

among the Company of the Bayān!

[2] Bear ye witness unto My Truth (haqqi) in every cycle and dispensation  (kull kūr wa dawr/dūr) [3] until We do announce unto thee through My Tongue (lisānī), the Truth (al-ḥaqq) of the Theophany [Manifestation] of My Logos-Self (maẓhar nafsī) [4] from beyond the Veil, [by proclaiming]

And I, I am indeed God, no God is there except I Myself!

[5] We have ever been contented with thee, this Day of Resurrection (yawm al-qiyāma), with every degree of satisfaction (riḍā') on this My part [6]  for I am indeed One Contented, fully Satisfied (riḍā rāḍiyy an).

His Servant the [messianic] Dhikr (Remembrance).

of the Countenance of thy Lord, is the One Elevated / `Alī (`aliyy /`Alī) who crieth out,

The Dhikr or messianic "Remembrance", the Bab, as the eschatological `Ali, is hre pictured as the one who cries out " I am indeed the True One" [God] (anā al-ḥaqq)!". This elevated claim of the Bab, anā al-ḥaqq, "I am the True One / God" echoes that of the God-intoxicated Sufi Ibn Mansur al-Hallaj (d.922 CE). 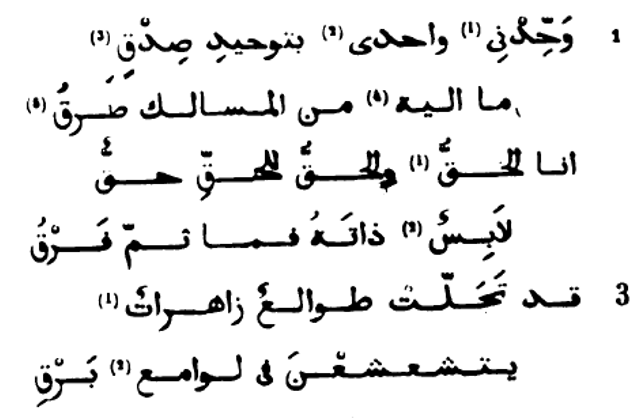 The  anā al-ḥaqq  claim of the Bab is also found quite frequently in the early, mid. 1844 CE  Qayyum al-asma' where the word al-Haqq is practically omnipresent occuring something like      times   and about XX times in the here theophanic utterance anā al-ḥaqq !

Around 600 years after al-Hallaj, the first Safavid ruler Shah Isma'il (d.930/1524) likewise uttered the anā al-ḥaqq in some of his  mystical poetry in which he used the pen-name Khaṭā'ī , in his Dīvān-i Khaṭā’ī - ديوان خطائى . This a Sufi Shaykh and one time head of the Qizilbash made use of maẓhar  and ḥaqq theophanological terminology in certain of his Turkish, somewhat (neo-) ghuluww (extremist) and  high imamological and theophanologically oriented poems. Apparently referring to himself he states in one poem : contained in his Turkish Diwan:

It is interesting to note that the shrine of Shah Isma'il I (d.930/1524) who caimed to be the maẓhar (Manifestation) of the ḥaqq (Ultimately Real) and uttered the "I am the Truth – Real [God" , the anā al-ḥaqq  was born in Ardabil and is buried in Ardabil, the home town of the Fourteenth Haykal, the Letter of the Living, Mullā Yūsuf Ardabīlī (d. Ṭabarsī 1265 /1849). See image at top of this page :