The Tafsir Surat al-`Asr (Surah of the Afternoon) of the Bāb.

The Tafsīr Sūrat wa'l-`Aṣr of the Bab.

Indeed mankind is in a state of loss

The Tafsir Surat wa'l-`Asr (Surah of the Afternoon) of the Bāb.

Written early on durng his stay in Isfahan for the Imam Jum`ah, Mir Sayyid Muhammad Sultan al-`Ulama', Khatunabadi, several important mss. of this important Qur'an Commentary of the Bab are known. MacEoin in his Sources (p.202) lists ten:

60. In the Cambridge and British Library texts, the tafsir is followed by a doxology on Faiima, entitled the Tasbih Fatima. It is unclear whether or not this short work is connected to the tafsir. Such a tasbih is not mentioned elsewhere, but a short piece entitled Tasbih-i `Ali is found in  INBA 5014C, pp. 2S3-S7.
61. Together with the KalimlJt-i mutafarriqa of Subb-i Azal.   62. With other works 63. With other works.

The Tafsir Surat wa'l-`Asr (Surah of the Afternoon) of the Bab commences: 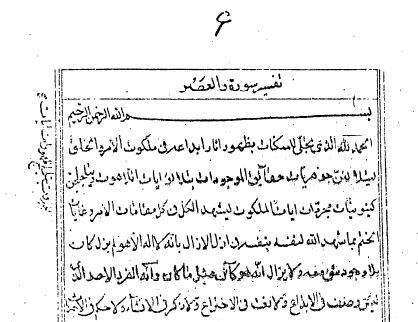 Translation with select notes and transliteration.

In the  Name of God, the Merciful, the Compassionate.

Praised be to God Who divuged Himself before all realms of Existence through the tokens of His wondrous directives (athar  abda`ihi)  in the Kingdom of the Command  and  of Creation (malakut al-amr wa'l-khalq). This to the end that He might illuminate the Essences of  the Realities of all spheres of Existence (jawhariyyat haqa'iq al-mawjudat) through the illuminative potencies of the verses of the Divine Realm (ayat al-lahut), by virtue, that is, of the glorious transfiguration of the realms of being (kaynuniyyat) expressive of levels of abstraction (mujarradat) through  the verses of the Realm of the Kingdom (ayat al-malakut). At this all may thus testify unto the totality of the realms of the command (muqamat al-amr)  and unto the finality of the seal (ghayat al-khatm) (cf. Q. 33:40).  God Himself doth indeed bear witness unto His Logos-Self, through His [Own] Logos-Self (li-nafs-ihi, bi-nafsihi), for an eternity of eternities, for there is no God except Him. For evermore was all else save Him bereft of existence

In the  commentary iof the Bab,  the  lawh mahfuz (Preserved Tablet) is presented as the "Greatest Tablet" (al-lawḥ al-akbar). This work of the Bab reflects Islamic esoteric traditions, as well, most notably, as the sometimes arcane Khuṭba al-ṭutunjiyya (The Sermon of the Gulf) ascribed to Imam `Ali (d.40/661), an oration which both  Sayyid Kazim Rashti as well as the Bab and Bahā’-Allāh,  regarded very highly.