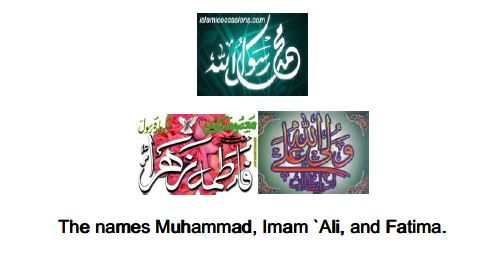 Under revision and Completion July 2015

The names Muhammad, Imam `Ali, and Fatima
More or less from its origins in the decades after the passing of the Arabian Prophet Muhammad (c. 570-11/632) in 632 CE., the Muslim world came to be divided into Imami Shi`i and related factions and what became the mainstream Sunni (loosely, "traditionalist"), community, now the majority Muslim world. The label Shi`i means `partisan' implying persons giving allegiance to `the party' (al-Shi`a) looking to the person of Imam `Ali ibn Abi Talib who was assassinated at al-Kūfa roughly thirty years after the death of the Prophet in 40/661 by a certain Ibn Muljam. Imam `Ali was the first successor to the Prophet who founded the Islamic religion. Muhammad is widely believed to have indicated this on the 18th of Dhū'l-Hijja (= 16th March 632 CE) after his `Farewell Pilgrimage' at an oasis named Ghadir Khumm ("Pond [Creek] of Khumm") which lies between Mecca and Medina.

`Ali was married to Fatima, entitled al-Zahra, `the Radiant One' (b. 20th Jamadi al-Thani 615 CE — d. 3rd Jamadi al-Thani 11/632), the daughter of the Prophet Muhammad. Imam `Ali was thus Muhammad's son-in-law and one reckoned by some authorities as the first Muslim believer. Other subsequent Imams were descended from him are reckoned to be twelve in number by the Ithna' `Ashari (Twelver) Shi`i Muslims of Iran, the Middle East and elsewhere. They were all descended from the offspring or progeny of this first couple `Ali and Fatima, the new Adam and Eve of the Islamic community.

The Imami Shi`i world of Islam thus recognizes as successors to the Prophet Muhammad, a succession of authority figures or religio-politcal leaders called Imams (lit. `leaders' `authorities'). These all male individuals are viewed extremely highly by the Shi`a (= Shi`ites) or adherents of Shi`ism (tashayyu`). They see them as the true fountainheads of Islamic religious guidance and as immaculate and infallible sources of knowledge.

The twelver Shi`ites believe that there have been eleven Imams after `Ali ibn Abi Talib (c. 13th of Rajab 600 - d. 40/661), totaling the `perfect number' twelve. `Ali and Fatima had two sons and two daughters. The two daughters were named Umm Kulthum and Zaynab, their two sons being the second Imam Hasan ibn `Ali (3/624-5 - d. Medina, 49/669-70) and the third, the martyred Imam Husayn ibn Ali (4/626-d. Karbala, 61/680). Imam Husayn, the grandson of the Prophet, is viewed by many as the most important martyr in Shi`ite and world history. His shine in Karbala is frequently visited each year especially around the time of the annual commemoration of his martyrdom on the 10th of `Ashūra during the first Islamic month of Muharram. His severed head came to be buried in the mosque of Sayyidna al-Husayn in Cairo.

The fourth Imam was Abū Muhammad `Ali ibn al-Husayn or `Ali Zayn al-Abidin (36/658- d. Medina, c. 95/713) to whom (among other things) is attributed a devotional work entitled al-Sahifa al-Sajjadiyya (The Treatise accompanying Prostration). His successor and the grandson of the third Imam was the fifth Imam Muhammad al-Baqir (57/676- d. c.126/743) to whom are attributed important doctrial traditions.

The sixth Imam Ja`far al-Sadiq (80-669-70- c. 148/765) was born and died in Medina and transmitted a great wealth of knowledge relating to Qur'an Commentary (tafsir), the heritage of Islamic legalistic and other traditions (pl. akhabar / ahadith), as well as aspects of Islamic jurisprudence (fiqh) and various of the sciences and esoteric branches of learning including jafr, (gematric divination) kimiya (alchemy) and `ilm al-hurūf (`the science of letters'). The origins or roots of the emergent Shi`ite Islamic religious phenomenon have been closely linked to his polymathic erudition and guidance. Shi`ism is thus sometimes referred to as the `Ja`fari religion or faction'.

Ja`far al-Sadiq's younger son Imam Mūsa al-Kaẓim (c.128/745-183/799) succeeded him as the seventh Imam according to the Twelver Shi`a. His eldest son Muhammad ibn Isma'il (d. 145/762) was instead viewed as the legitimate Imam and successor according to those Shi`i Muslims who came to be known as the Isma'ilis (`followers of Isma'il) or `Seveners'. Today a mainstream branch of this Shi`ite group look to their leader and head the Aqa Khan ("Chief Commander"), today Prince Karim Aqa Khan IV, the 49th Isma'ili Imam, the supreme Isma'ili leader offering spiritual and temporal guidance.

The tenth Imam was named Abū'l-Hasan `Ali ibn Muhammad (b. Medina c. 212/827-d.254/868) and known as `Ali al-Hadi or al-Naqi ("The Pure One"). For a twenty-year period he was placed under house arrest in Samarra (Iraq) where he died. In Shi`i-Shaykhi and Babi-Baha'i circles he is especially famous for transmitting a visitation text known as al-Ziyara al-jami`a al-kabira (`The Greater Comprehensive Visitation Supplication') on which Shaykh Ahmad al-Ahsa'i (d. 1241/1826) - for Baha'is an important precursor of the Bab - wrote a very detailed 1,500 or so page commentary.

His son the eleventh Imam was named Hasan al-Askari (b. Medina, 130/844-d. Samarra 260/874) because he was confined to an army camp (`Askar) again in Samarra where he died aged about thirty. An important Tafsir work or Arabic Qur'an Commentary is ascribed to him which has been printed several times since the 19th century. Legend has it that this eleventh Imam married a Greek princess descended from Simon Peter named Narqis (Gk. Narcissus) or Saqil from whom their alleged son the twelfth, messianic, Imam Muhammad al-Mahdi, was born on the 15th of Sha`ban 255 or 869 CE. Still held by the Shi`a to be living in ghaybat (occultation) he is believed to have disappeared when about five year old down well in Samarra around 260/874, one thousand years or so before the declaration of the Bab in 1260/1844.

There exist many thousands of traditions from these eleven or twelve Imams. Hundreds of them are cited and commented upon by the Bāb and Baha'u'llah who also wrote several visitation or Ziyāra devotional texts for key figures among the Imams. In this paper the important status of the Imams in Bābī and Bahā'ī sacred writings will be considered as will select doctrinal amnd other writings attributed to these descendants of Imam `Alī and his wife Fatima.