Somes Notes on the Names (asmā') and Attributes (ṣifāt) of God in Islamic and Babi-Baha'i Theology. 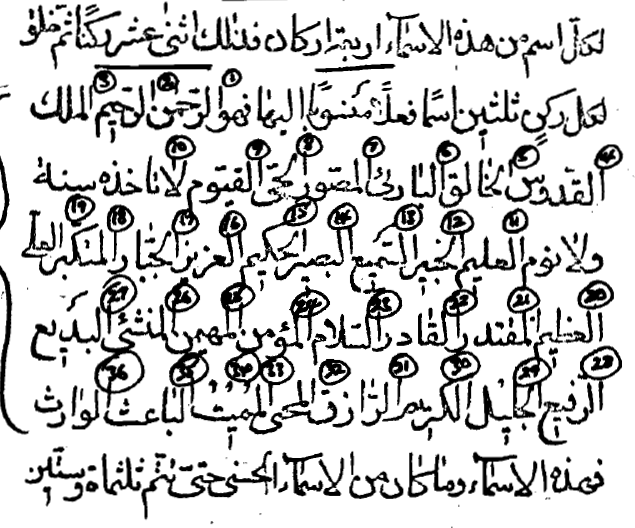 Somes Notes on the Names (asmā') and Attributes (ṣifāt) of God in Islamic and Babi-Baha'i Theology.

In the several millennia of the history of the so-called Abrahamic religions - Judaisms-Christianities and Islamic religious and associated movements - God has many names and hundreds or rather thousands of Names (asmā', sing. ism) and Attributes (ṣifāt, sing. ṣifah). God himself has numerous personal names withn the Hebrew Bible and is characterized by many subsiduary titles, names and epithets. The same is true of the Christian God - sometimes considered identical with Jesus Himself - of the more than twenty five Greek books of the New Testament. Rooted in the over 6,000 verse Arabic Qur'an, the well-over 1,000 year old Islamic religion gives priority to the name of God Allāh (lit. `the God', cf. the Biblical Hebrew Eloah = God) though He is also considered the supreme Rabb or "Lord" and much more besides.

The religion founded and articulated by the young Sayyid `Ali Muhammad Shirazi (1819-1850) commonly known and self-designated as the Bab ( = Ar. Gate) from 1260/1844 until his execution for religious heresy on July 9th 1850, extended and supplemented Islamic theological norms in creative ways giving precedence to an apophatic view of the Ultimate Godhead beiond human understanding yet talking about hundreds of Names and Attributes. Like the Bab, Baha'u'llah wrote thousands of scriptural books and letters in Persian and Arabic again highlighting the incomprehensibility of the God beyond likeness, number and  gender - One yet Ultra He-She-It-  though possessed of hundreds of Names and Attributes in his knowable, cataphatic aspect. God manifests himself through the operations of Hid mashiyyat (Primal Will) through human mazhar-i ilahi, "Manifestations of God". They manifest God for the benefit of human "knowability" (`irfan, "gnosis")  but keep Him hidden in His Essential Reality. The Unknown is "known" only according to human capacity by means of His Names and Attributes.

God can be said to be "One" yet is really supra-monotheistic. His "Oneness" or (Ar,) Tawhid has multi-faceted significances. For all human beings He has ever been "One" yet with a Oneness beyond numeration. The Babi-Baha'i sacred writings indicate that His "Oneness" takes on many faces, many aspects or characteristics, numerous Names and Attributes, from age of age or era to era.

Extract from the Kitab al-Fihrist (Book of the Index) of the Bab listing 36 foundational Names of God (asma Allah).

These then are the Names though not the