There are a number of Arabic and Persian scriptural Tablets of Mirza Husayn `Ali Nuri, Baha'-Allah associated with a `Laylat al-quds', a `Night of Holiness'  or a `Sacred Night'. One such Persian-Arabic text of Baha'-Allah known as the Lawh-i Laylat al-Quds (I) or `The Tablet of the Sacred Night', was written in Edirne-Adrianople around 1865-6. In the printed edition in the hand of Mishkin Qalam entitled Iqtidarat, it spans  some five and a half pages.

The text of the  The Lawh-i Laylat al-Quds [1] has been printed a number of times, including, for example :

As printed in Iqtidarat this scriptural Tablet opens with the following Arabic basmala declaring that the Name of God might enlivened the hearts of the Supreme Concourse ( al-mala' al-a`la) followed by an Arabic devotional passage. 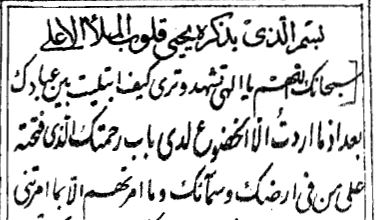 Unto Thee be Glorification, O my God! Thou witnesseth and Thou seeth ...

It ends in Arabic as follows:

"... His is the Creation and the Command (al-khalq wa'l-amr) for He doeth whatsoever He willeth and ordaineth whatsoever He pleaseth. He, verily, He indeed the Powerful Ordainer (al- muqtadar), the Mighty (al-aziz), the  Omnipotent (al-qadir)."

Among the translations of the text are those of :