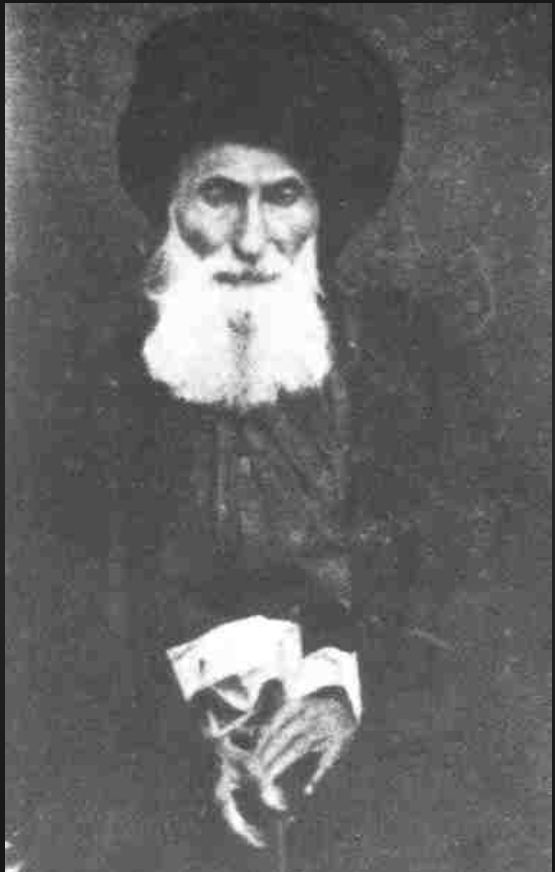 The opening lines of a Persian Tablet of Baha'u'llah to Hajji Sayyid Jawad Karbala'i (d. Kirman, 1882).

The Persian scriptural Tablet cited above is as that printed in the Kashf al-Ghita' `an hiyal al-a`da' ("The Unveiling of the Veil from the Scheming of the Enemies") a apolgetic critique of the Nuqtat al-kaf attributed to Hajji Mirza Jani Kashani. Its writing was initiated at the command of `Abd al-Baha', the son of Baha'u'llah, at the hand of Mirza Abu al-Fadl Gulpayigani (1844- d. Cairo, Jan 21st, 1914) and others though the latter Baha'i apologist died before it could be completed or published. It is a volume that failed to take accurate account of the often complex issues surrounding the authorship of the Nuqtat al-Kaf and of the role of Edward G. Browne in its acquisition and publication in 1910. Though `Abdu'l-Baha ordered what copies of this book that were published destroyed it yet contains some important materials deriving from the Bab and Baha'u'llah including the text set down here on pages 64-70, the Tablet of Baha'u'llah to Hajji Sayyid Jawad Karbala'i.

It will be relevant to cite here the words of Shoghi Effendi recorded in the Dawn Breakers about Sayyid Javad Karbala'i and the abovementioned Tablet to him which contains passages expository of the Kitab-i Aqdas: :

"[2 The remarkable circumstances attending the conversion of Haji Siyyid Javad-i-Karbila'i are fully related in the "Kashfu'l-Ghita'" (pp. 70-77), and reference is made to a significant Tablet revealed to him by Bahá'u'lláh (p. 63), in which the importance of the Kitáb-i-Aqdas is fully stressed, and the necessity of exercising the utmost caution and moderation in the application and execution of its precepts emphasised. The text of this Tablet is found on pp. 64-70 of the same book [ Kashf al-Ghita']."

The Conversion of Sayyid Javad Karbala'i

The same source, the Dawnbreakers records the following note of Shoghi Effendi :

PDf. of the Persian Tablet to Hajji Sayyid Javad as originally printed in Kashf al-Ghita 64-70.

[1] Scriptural sprinklings of Divine Inspiration (rashhat-i wahy) through the Leaves of the Sidrat al-Muntaha (The Lote Tree Beyond which there is no Passing), with assistance from the  Breeze of the Divine Intention of the King of Names (malik al-asma'), do issue [sprinkle] forth in the form of these Words (kalimat):

The Blazing Light of Nobility (nayyir-i karam) shineth forth from the Horizon of the Universe! [3] If God so willeth the  false and inhibitive impurities (kudurat) that are the cause of impediments and opposition may be vapourized and be obliterated by virtue of the Breezes of the Garment of Mercifulness (qamis-i rahmaniyya). 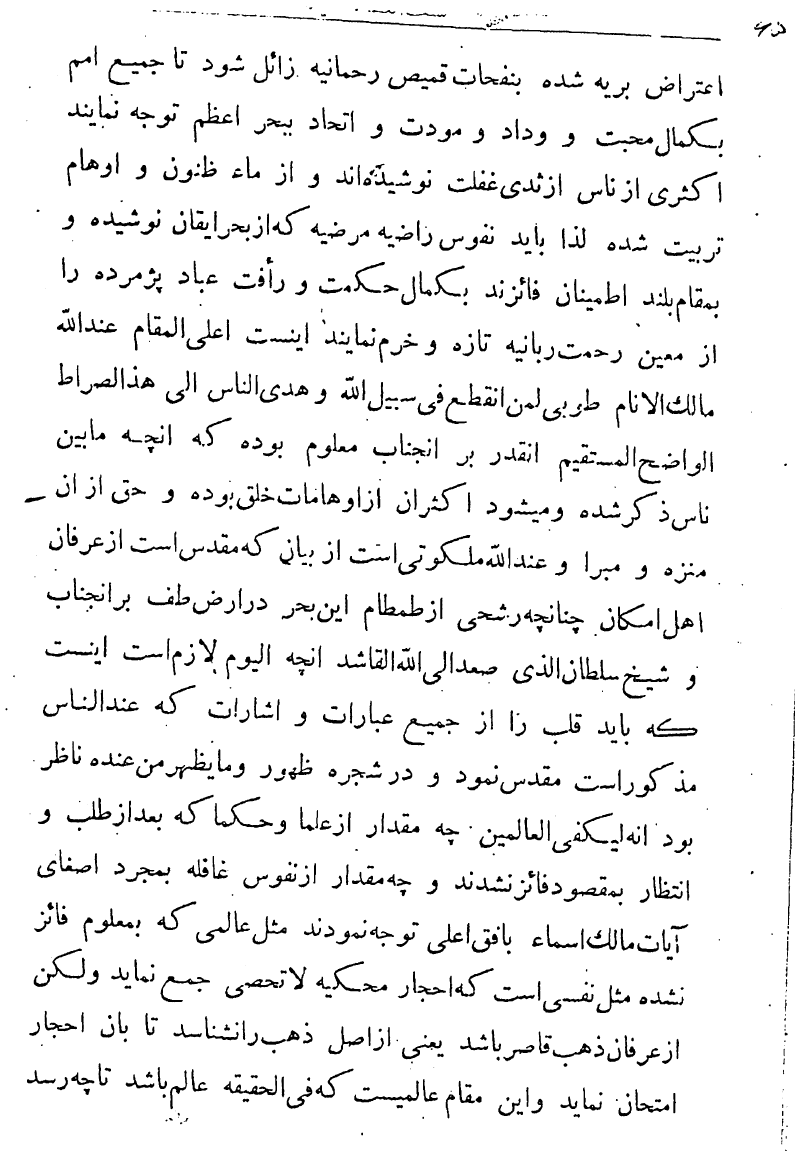 [4] This such that all of the nations (umam) may be inclined towards the perfection of Loving kindness (kamal-i muhabbat) and Fellowship (wadad), Loving Fellowship (mawaddat) and  Unity (ittihad) and thus orient themselves towards the Most Great Ocean (bahr-i a`zam). [5]

We do make mention of thee [Hajji Sayyid Jawad) on numerous occasions (ahyan) and We do recollect those days in which thou were present before the Divine Throne (al-`arsh) [= Baha'u'llah]!

We supplicate God that He might make thee to be one of Magnetic Potency (magnatis) for His Cause (amr)! This for the attraction through thee of those intelligent ones (al-`uqul) and of other souls (al-nufus) also. He is indeed the one Who gave thee the Gnosis of the "Face" (al-wajh) after he had annihilated everything else, all things (fana' al-ashya' kulliha) [see Q. 55:26f]. Thou should thank Him for this Incomparable Bounty (al-fadl al-mamnu`). This is the Day whereon all stand in need of the Gnosis of the Manifestation of the Divine Theophany (irfan-i mazhar-i zuhur)  ...

Notable among the companions of Bahá'u'lláh in 'Iráq, one who rendered memorable services to the Faith and was especially mentioned by Nabíl in the aforementioned story, is Hájí Siyyid Javád-i-Karbilá'í to whom reference has been made in previous chapters.

He was one of the outstanding disciples of Siyyid Kázim-i-Rashtí, and in his early youth had met the renowned Shaykh Ahmad-i-Ahsá'í, who was the founder of the Shaykhí sect of Islám. He was distinguished by his learning and knowledge, his piety and uprightness. He was reserved in his speech and very gentle in his manners, and had a dignified bearing which endeared him to people.

Hájí Siyyid Javád was one of the early believers of the Bábí Dispensation. He had known the Báb from the days of His childhood, years before His Declaration, and was fascinated by the remarkable qualities which were so strikingly apparent in Him. Some years later, he went to Búshihr and for almost six months lived in the building where the Báb and His uncle had their business premises. There he became attracted to the Báb and attained His presence many times, but never did it cross his mind that the Promised One of Islám could be any other than one of the divines or men of learning.

In a spoken chronicle recorded by Mírzá Abu'l-Fadl, the outstanding scholar of the Faith, Hájí Siyyid Javád recalls with excitement the circumstances which led him to embrace the Faith of the Báb in Karbilá: [p. 221]

...It was in 1844 that Mullá 'Alíy-i-Bastámí returned to Karbilá from Shíráz, bringing the news of the appearance of the Báb* and announcing that he himself together with other disciples had already attained His presence. This news, which spread rapidly, created a great excitement among the divines who trusted Mullá 'Alí and had regard for his dignity and pious life.

Mullá 'Alí only mentioned the title of the Báb, however, and refused to disclose His identity. He used to say: 'The Báb has appeared and some of us have attained His presence, but He has forbidden us to mention His name or disclose His identity or that of His family at the present time. Soon however His Message will be noised abroad and His name will be disclosed to all.'

This news brought about an amazing sensation in 'Iráq. In all the gatherings the appearance of the Báb was the topic of discussion. Many people speculated as to His identity, but no one ever suspected that Mírzá 'Alí-Muhammad could be the Báb. The possibility never crossed anyone's mind, owing to the fact that He was only a youth and a merchant by profession. The people without exception thought that the Báb, the Gate of the knowledge of God, would appear from among the learned and not from the trading and professional classes. The Shaykhís, in particular, thought that He would be one of the leading disciples of Siyyid Kázim.

One day I invited Mullá 'Alí to my home...We talked about this wonderful event, but in spite of the strong bonds of love and friendship which existed between us, I could not extract from him any clues by which I could recognize the person of the Báb. In the end I became desperate. Jokingly I gripped his arms and pushed him hard against the wall...There I held him, demanding that he disclose the name of that wondrous Being. But Mullá 'Alí calmly reminded me that he was forbidden to do so...In the midst of all this, Mullá 'Alí quite inadvertently mentioned that the Báb had re- 222 -quested him to collect any letters He had written to people in Karbilá and send them back to Shíráz.

On hearing this, the thought of Mírzá 'Alí-Muhammad suddenly flashed through my mind. Although it seemed very unlikely, I wondered whether it could be He. So I rushed to my room and fetched some of His letters which were addressed to me. As soon as Mullá 'Alí's eyes fell upon the seal of the Báb, he burst into tears. I was so filled with emotion that I too wept. Between his sobs Mullá 'Alí's constant plea to me was: 'I did not mention His name. Please do not disclose it to anyone...'

It was not long after this that the Báb declared His station in Mecca and the news of this was widely spread throughout the Muslim world and His identity disclosed.1 [= 1. Masábih-i-Hidáyat, vol. 11, pp. 489-91]

Soon after this interview, Hájí Siyyid Javád travelled to Shíráz and attained the presence of the Báb, this time as an ardent believer. He dedicated his life to the service of the Cause in Karbilá. It was in this city in the year 1851 that he met Bahá'u'lláh for the first time. He immediately recognized the greatness of Bahá'u'lláh, but did not appreciate His glorious station until some time later.

The following is a translation of his spoken chronicle as he describes his first meeting with Bahá'u'lláh:

...I was in Karbilá when the news of the arrival of Bahá'u'lláh in that city reached me. The first person who gave me this information was Hájí Siyyid Muhammad-i-Isfahání.* [* The 'Antichrist of the Bahá'í Revelation'.] Before I attained His presence I expected to find Him a youth of noble lineage, the son of a vizir, but not one endowed with immense knowledge or wisdom. Together with some friends I went to meet Bahá'u'lláh. As was their custom, my friends would not enter the room before me; so I went in first and occupied the seat of honour in that gathering.

After we had exchanged greetings Bahá'u'lláh turned to those present and asked them what subjects they, the disciples of the late Siyyid, [Kazim Rashti] † usually discussed when they 223 gathered in a meeting. Did they discuss the topics of religion as current among men? What would they do if God manifested Himself to man, rolled up the old doctrines and philosophies, revealed a new set of teachings and opened up a new page in divine knowledge? What then would be their position?

Bahá'u'lláh spoke for some time in this vein. It was not long before I realized that we, known to be men of learning and knowledge, dwelt in the depths of ignorance, whereas He, whom we considered to be only a youth, the son of a vizir, stood upon the highest pinnacle of understanding and wisdom.

After this experience, whenever I entered His presence, I would sit at His feet in absolute humility and refrain from speaking. I always listened attentively to Him in order to benefit from His knowledge and understanding. This attitude of mine, however, used to annoy my friend Hájí Siyyid Muhammad. Once he rebuked me, saying: 'Assuming that all agree that Jináb-i-Bahá is of the same calibre as ourselves, why do you sit in silence and show so much humility towards Him?'

I pleaded with my friend not to be angry with me. I told him that I could neither specify a station for Him nor, God forbid, consider Him as one of us. I regarded Him as incomparable and unique.2 [-2. Masábih-i-Hidáyat, vol. 11, pp. 504-6.]

Early in 1852 Bahá'u'lláh returned from Karbilá to His native city and was imprisoned a few months later in the Síyáh-Chál of Tihrán. Hájí Siyyid Javád was in Karbilá when Bahá'u'lláh was exiled to 'Iráq after His release from that dungeon. During the ten years of Bahá'u'lláh's sojourn in 'Iráq, he was a faithful companion, one who truly recognized the station of Bahá'u'lláh before His Declaration.

When Bahá'u'lláh was exiled to Adrianople, Hájí Siyyid Javád travelled to Persia and lived in various parts of the country, serving the Faith with great distinction. He remained a loyal and steadfast believer until his death in Kirmán about 1882.