The Commentary of the Bab upon the Hadith, "Every Day is `Āshūrā’" (kull yawm `Āshūrā’"). ,

`ASHURA' - THE TENTH OF MUHARRAM

The Commentary of the Bab on the Hadith, "Every Day is `Āshūrā’",

The Twelver Shi`i Hadith "kull Yawm `Āshūrā’", "Every Day is `Āshūrā’" can be found in

Within the text the Bab cited this brief Hadith in full, namely, "Kull Yawm `Āshūrā’", "Every Day is `Āshūrā’" as will be seen in the translation below. 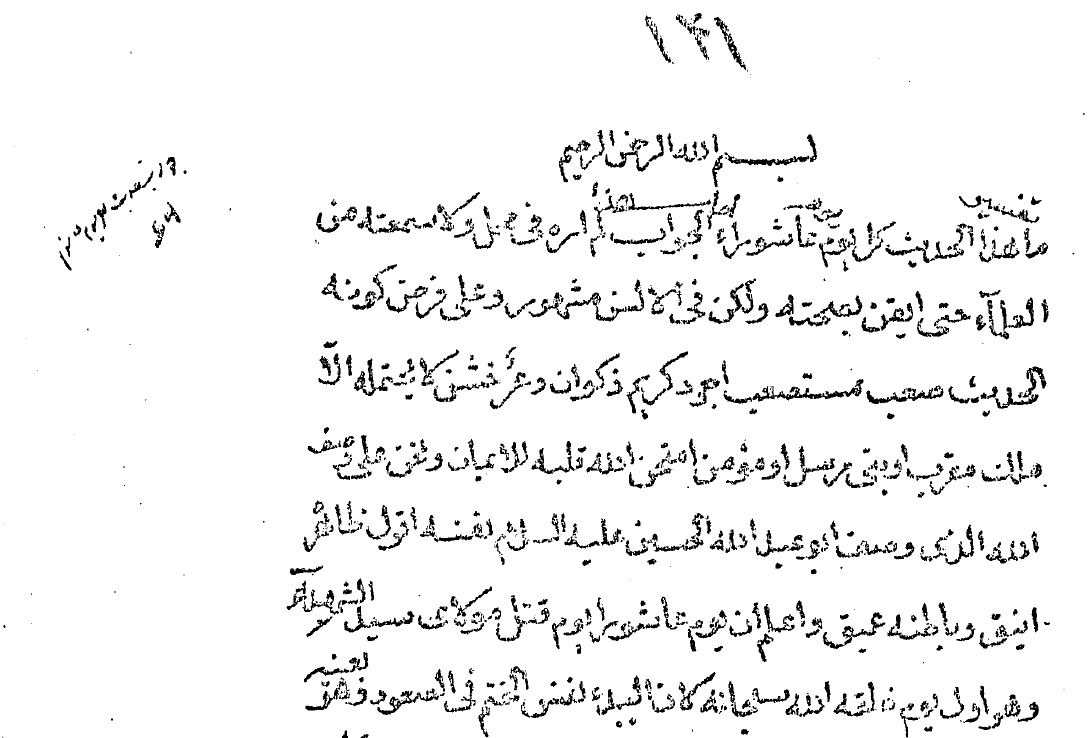 In th Name of God, the Merciful, the Compassionate.

[2] Reply  (al-Jawab): This [Hadith] was not set forth in any [particular] place and I did not hear of it from [any of] the `ulama' [Shi`i clerics] until I become certain about its text by means of the lips of the illustrious ones (al-alsan al-mashhur)  [the Imams?] and as accords with the specified injunction of his [determinitive] Being (fard kuni-hi) for the Hadith is "abstruse, bewilderingly abstruse"  (sa`b mustasa`b) ...                      [3]  It is such that none can bear it save an angel [messenger] brought near (malak muqarrib), a divinely sent prophet figure (nabi mursal) or even a believer whose heart  God hath previously tested with respect to his faith..*..

[1] And know that the Day of `Āshūrā’ is the Day of the martyrdom of our Lord (mawla), the Sayyid al-Shuhada' (the Lord of Martyrs) [Imam Husayn]. [2] He marks the First Day (awwal yawm) for God created it [him, Imam Husayn] - Glorified be he - to be the  Genesis (al-bada') of the Logos-Self of the Seal (nafs al-khatm) [of cyclic ending and continuity] at the time of his ascension [martyrdom] (fi'l-su`ud) [3] This since he [Imam Husayn], in his Essence, is the very Day of the Manifestation of the [messianic] Qa'im (yawm zuhur al-qa'im) - may God hasten his appointed time! [4] He is thus the Pivot of the Days (qutb al-ayyam) since his martyrdom centered itself as the very Pivot of the Greatest Macrocosm (qutb al-`alam al-akbar) in that  all of the [coming] "Days" (kull al-ayyam) expresses the [era of the advent of the] Divine Manifestation [Theophany] (zuhur). [5] He-It is a "Day" before God which is Mighty (kabir) relating to the Martyrdom of His Lord (sahib).

[1] So when my Lord (sayyidi) [Imam Husayn], the Forbear of the Servant of God (Abu `Abd-Allah) [the Bab-the Qa'im]- upon him be peace - was martyred, everything was incinerated [burned into oblivion] resulting in the burning up of his inner being. [2] This shattered in pieces his inmost being (al-akbad) for it gravely afflicted his inner self and perplexed the Pivot of the Days (qutb al-ayyam) on account of the sheer severity of the calamity (shadda musibat)! [3] Thus when the Divine Purpose (amr) was realized through the "except" [God] (min illa) it was not the "Day of `Āshūrā’"  though when it came to be the Day of His martyrdom - upon him be peace -  it was nigh the            (`ind al-jawarij) and the heart (al-qalb) was inclined in the direction of the "except" [God] (jiha illa) to the end that everything ("all things"; kull shay') might weep over him for forty days

* These lines are based on a hadith registered in the al-Usul min al-Kafi of al-Kulayni and numerous other sources,]