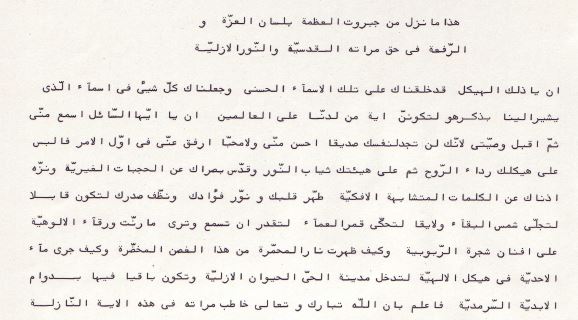 Arabic Typescript of the opening of the Tafsir-i Hu [Huwa] supplied to Stephen Lambden from the BWC. Haifa, Israel, c. 1982.

This is being revised and completed

This wholly Arabic scriptural Tablet of Baha'-Allah which should perhaps dated to the early-mid Iraq-Baghdad period (1863-1868) commences with the following lines which apparently indicate that this work has to do with the status or position of the "Mirrors" (mirat) of the Babi dispensation or religion of the Bab and its one-time nominal leader leader Subh-i Azal (the Morn of Eternity) (c.1831- d. Famagusta,1912), referred to as the Pre-Eternal Light (al-nura al-azaliyya)" :

In basic grammatical terms  هو   =  huwa is the Arabic third person masculine pronoun. In the Qur'ān and in numerous other Arabic Islamic religious texts, traditions and literatures,  it is often indicative of the  existent reality of the Godhead whose personal Name as Allah is presupposed. Thus هو   in the Qur'an and elsewhere, as well as in thousands of Babi-Baha'i religious texts, indicates the reality, transcendence and absolute existence of the Godhead.  Thus also the common theological phrase هوالله  which also has deep theological and  numerological significances both  in Islamic mysticism as well as in a considerable number of  the writings of the Bab and Babi and Baha'i sacred literatures.  Additionally, the Bab wrote several commentaries on the first letter of the هو huwa, several works  entitled Tafsir al-hā' (Commentary upon the letter "H").  Baha'-Allah's Tafsir-i hu  or Tafsir Huwa was writtern in a Babi universe of discourse before he had announced his own messianic or theophanological claims in 1863 (near Baghdad) and subsequently in 1866-7 (from Edirne) CE.

The text of the Tafsir-i hu / Tafsir  huwa has never  been officially published or translated. The text I refer to, translate and to some extent reproduce here. is based on a typed text communicated to me by the Baha'i World Centre (Haifa, Israel) in 1982

The Ipseity and the Tafsīr-i Hū’  هو
Bahā'u'llāh wrote a deep theological `Commentary on "He is"' (Tafsīr-i Hū [Huwa] c. 1859?) evidently some time after a recension of the `Hidden Words' (Kalimat-i Maknunih c.1858 CE), one of which is cited and interpreted (Arabic no. 3). It contains many interesting theological statements about the Divine Identity (huwa, "He-ness"), "Essence" (dhāt), Names (asmā') and Attributes (sifāt)  and seems to have been written in explanation of a passage from a writing of the the Bāb. It was addressed to  a "Mirror" (mirāt) of the Bābi dispensation, perhaps his half-brother Mirzā Yahyā Nuri (d.1914). The issue of the relationship of the "Mirror", the divine Names and Attributes, the "Most Beautiful Names" (al-asmā' al-usnā'), and the Divine Identity (Ar.
huwa = "He is" Per. Hu) is central.
It is indicated that the Manifestation of God is the locus of the Names and Attributes of God and the vehicle through which the Unknowable Essence -- Who is beyond the "Most Beautiful Names" (al-asmā' al-usnā') -- communicates with His creation. While the totality of the Divine "Names" (al-asmā') revolve around the "Divine Will" (mashiyyat) all the Divine "Attributes" (al-ifāt) are realized through His "Intention" (irada). Everything circumambulates the Divine and Unfathomable Essence (dhāt) whose self-manifestation (tajalli) or theophany is realized through His major Prophets or Manifestations. The Bāb, among other things, is  referred to as the "Fountainhead of His Essence" (manba` al-dhātihi) and the "Locus of His Activity" (`Source of His Action'; masdar fi`lihi).
Bahā'-Allāh explains how divinely revealed verse indicate  that all the divine "Names" (al-asmā') are concentrated in the expression "all things" (kullu shay'; abjad = 19X19) which were subsequently compacted or limited within the divine name "He is" (huwa). In Arabic "He is" (huwa) is composed of the two letters "H" (hā') and "W" (wāw) which are indicative of its "inner" and "outer" dimesions of reality respectivey. The inner dimension of the Divine Identity, Bahā'-Allāh adds, is expressed in the phrases "Hiddenness of the Ipseity" (ghayb al-huwiyya), "Interiority of the Divine Oneness" (sirr ahadiyya) and the "Primordial, Pristine Divine Essence" (al-dhāt). When the hidden "H" is established upon "enthroned, eternal Temple" (al-haykal al`arshiyya al-azaliyya), "the Beauty of the Divine Ipseity" (jamāl al-huwiyya) is established in the "Luminous Temple" (haykal al-nuriyya) of the Manifestation of God. God made His name "He is" (huwa) the greatest of the divine designations for it is a "Mirror" (mirāt) of all the divine "Names" (al-asmā') and "Attributes" (al-sifāt).
Unlike the divine "Names" and "Attributes" whose manifestation accounts for all earthly and heavenly things, the Reality of the Divine Essence is not in its very Self (al-dhāt bi'l-dhātihi) manifested unto a single thing; neither is it grasped or comprehended by anything. It is guarded from the comprehension of God's creatures and is immeasurable.

The Tafsir-i Huwa concludes as follows :

We created thee according to these Most Beautiful Names (al-asma' al- husna). [2] And We made thee the Pleroma (kulli shay', "Everything"-"All Things"; abjad = 361) amongst the [Divine] Names (al-asma') [3] which alluded unto Us by means of the mention of "Huwa" (He is). [4] This such that it might be a sign (ayat) from before Us unto all the worlds.

Hearken ye unto Me then draw thou nigh unto my wasiyya ("Authority") for thou shall not find for thyself anyone trustworthy (sadiq an), anyone more reliable [beauteous] (ahsan) than Me, nor anyone more loving [preferable] (muhibb an) than I Myself or more kindly (arfaq) then Me at the onset of the Cause of God (awwal al-amr). [6] So enrobe thy temple with the confirmations [supports] of the Spirit (arda' al-ruh).

Extract from an Early Lambden Translation

The Commentary on "He is" (huwa) or Tafsīr-i Hū [Huwa]

We assuredly created thee according to these "Most Beautiful Names" (al-asmā' al-ḥusnā) and made Thee "all things" (kulli shay’)  relative to the Names which allude unto Us through the mention of "He is" (huwa) in order that they might be a sign communicated on Our part unto all the worlds.

Hearken unto My gracious Favour (mann)  then turn unto My Guidance (wasiyyati)  for thou shall not find one more righteous (ṣidīq  an)  then Myself nor a mystic lover (muḥibb an)  more elevated than Myself in the genesis of the Cause of God (awwāl al-amr). So clothe thy temple with the robe of the Spirit (rida' al-rūḥ) then adorn thine outer beings with vestments of Light (thiyāb al-nūr)

So know that God, exalted and glorified be He, addresseth His Mirror (mirāt)  in this verse which hath descended from Him, `O Eternal Fruit (thamarat al-azaliyya = Yahya?), Lordly Garments (qumuṣ al-rabbāni),  Ancient Temple (haykal al-qadmīnī)  and Perpetual Tree (shajarat al-ṣamadāniyya),  We, verily, created thee according to these `Most Beautiful Names' (al-asmā’ al-ḥusnā').' In other words, `We allotted Thee all the Names (al-asmā') among those which were made manifest, dawned forth, shone brightly and radiated from the most sublime celestial realm (jabarūt al-a`lā)  and the Kingdom of Origination (malakūt al-inshā');  selected from the Most Beautiful Names (al-asmā' al-ḥusnā')  which We referred unto Our Self  since He, verily -- exalted he His mention -- is the Names (al-asmā')  which are referred to His Self  which is derived from the Most Beautiful Names (al-asmā' al-ḥusnā') and the Most Lofty Signs (al-āyāt al-kubrā):   for example, "Knowledge" (al-`ilm); "Power" (al-qudrat) ...

And `Alī [Muhammad, the Bāb] is the Fountainhead of His Essence (manba` al-dhātihi) and the Mine of His Knowledge (ma`dan `ilmihi); the Retreat of His Command (makman amrihi) and the Locus of His Activity (`Source of His Action'; maṣdar fa`alihi)  relative to all that hath been or will be made manifest and that hath been or will be created. Apart from these Names (asmā'), of which mentionis made apart from the Most Beautiful Names (al-asmā' al-ḥusnā'), nothing is alotted unto His Logos-Self (nafsihi)  or alotted unto His Essence (dhātihi).  Such hath been His way on the part of He before whom there is naught and after Whom ….