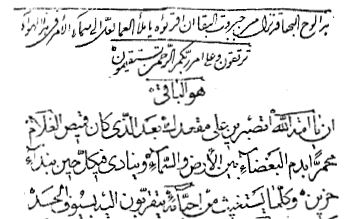 The Lawh-i Baha' (The Surah of Baha' = Glory-Splendour dates to around the early (January, 1866 CE) or middle of the Edirne or Adrianople period (c. 1865-6? ), just before the `Most Great Separation' beween Mirza Yahya and Baha'u'llah. Ishraq Khavari, however, dates the Lawh-i Baha'  to around the time of the exile from Baghdad to Constantinople-Istanbul (Ganj No. 18). This Tablet  commences in Arabic but also has a  following Persian section. It was addressed to Khatun Jan Qazviniyya, the daughter of Hajji Asad-Allah Farhadi Qazvini (see Mazandarani, Athar al-asrar, II:89-90).

The Lawh-i Baha'  commences with the following introductory prelude,

This is the Lawh al-Baha' which was revealed from the Empyrean of Eternity (jabarut al-baqa'). So recite it then!, O concourse of the Theophanic Cloud (mala' al-`ama'),  perchance ye might soar up unto the heaven of the Cause of God (sama' al-amr) in this atmosphere, and thus be firmly established within the Cause of thy Lord, the All-Merciful.

Then the female figure Khatum Jan is addressed as follows:

Be patient under all circumstances and mindful of the fact that the robe of this Youth (qamis al-ghulam) was dyed crimson with the blood of enmity betwixt earth and heaven. At every moment he crieth out with a soul-saddending  cry (bi-nida' hazin). All of his associates that have attempted to succour him found themselves assailed by the swords of emnity (suyuf al-hasad)....

Mss. and printed editions of this scriptural Tablet can be located, for example, in

Some attention has been paid to this scriptural Tablet by `Abd al-Hamid Ishtraq Khavari in his Ganj-i shayigan and Adib Taherzadeh  in his The Revelation of Baha'u'llah (vol. 2:171-60).