The Shrine of Imam Husayn in Karbala

The third twelver Imam Husayn was of tremendous importance for both the Bab (who was one of his descendents on both his mother's and his father's side) and for Baha'-Allah who, like the Bab, claimed to be his "return" or express his eschatological presence as expected in a large number of Imami Shi`i traditions. The first patentally bestowed name of Mirza Husayn `Ali Nuri, Baha'-Allah, was Husayn, حسين   which in Arabic means (loosely speaking), `little beauty'. The name is common in the Shi`i and wider Muslim world and has been variously transliterated, e.g. Hossein (Persian), Hüseyn (Azerbaijani), Hüseyin (Turkish). In his centennial God Passes By (1st ed. 1944-5) the Baha'i Guardian (vali-yi amr Allah) Shoghi Effendi (d. London 1957) reckoned Imam Husayn the greatest of the twelver Imams, a saintly martyr of incomparable holiness. This Imam is hundreds of times mentioned in Babi-Baha'i sacred writings.

The Ziyārat-namah (Visitation Tablet) of Baha'-Allah for the third, Martyred Imam Husayn  (d. Karbala, 61/680) is of unknown but probably early-mid. of the West-Galilean (Acre) period (1868-1892). It is wholly in Arabic and is some  nine or so pages long. It has been published in :

The Ziyārat-namah of Baha'-Allah for Imam Husayn commences  as follows, with an identificatory heading followed by a huwa ("He is [God]" prescript with four divine atttributes, 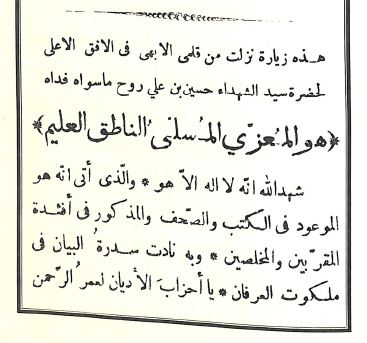 This Ziyarat (Visitation Tablet) was sent down through My All-Glorious [Abha] Pen (qalami al-abha) within the Transcendent Horizon (al-ufq al-a`la)  for his holiness the Prince of Maytyrs (hadrat sayyid al-shuhada'), [Imam] Husayn son of `Ali [ibn Abi Talib, d. 40/661), may the sprit of ebverything other than him be a sacrifice for him.

God testifieth that there is no God save Him. He is indeed the One who hath come for He is the One Promised (al-maw`ud) in the [sacred] Books and the Scruptures (al-kutub wa'l-suhuf), the One commemorated within the inmost hearts of those nigh unto God as well as the sincere ones (al-mukhlisin). On his account the Lote-Tree of the Extremity (sidrat al-muntaha) calleth out in the Kingdom of Gnosis (malakut al-`irfan), `O partisans of the various religions (ahzab al-adyan)! By the life of the All-Merciful!...

This Ziyarat concludes with the following prayer or supplication: 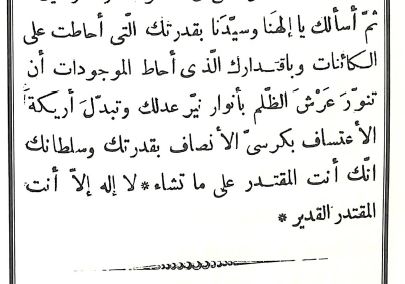 Now do I supplicate Thee, O our God, and  our Master (sayyid), through Thy Might (qudrat) which hath encompassed all the realms of being (al-ka'inat) and by Thy Power (iqtidarat) which hath encompassed everything that exists (al-wujudat), that Thou make luminous the throne of tyranny (`arsh al-zulm) through the Lights (al-anwar) of the Luminosity of Thy Justice (nayyir `adlika). And [I supplicate Thee] that Thou transform the couch of  oppression (arikat al-a`tisaf) into the [heavenly] Pedestal of Equity (kursi al-insaf) by virtue of Thy Might (qudrat) and Thy Sovereignty (sultan) for Thou art indeed, One Supemely Powerful (al-muqtadar) to accomplish whatsoever Thou willeth. No God is there except Thee, the One Supemely Powerful (al-muqtadar), the Omnipotent (al-qadir).