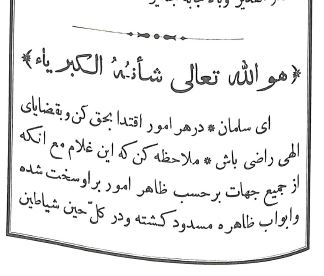 Lawh-i-Salman (Tablet of Salman) I

Mss and printed texts of the largely Persian Lawh-i Salamn I:

Translation of the first Tablet to Salamn, Lawh-i Salman (Tablet of Salman) I

He is God, exalted be His Elevated Modes of Being

In all circumstances be enpowered by the One True God [True One] (haqq) and be thou content with the divine pronouncements. Be ye aware that this Youth (ghulam)

The door of the knowledge of the Ancient Being hath ever been, and will continue for ever to be, closed in the face of men. No man's understanding shall ever gain access unto His holy court. As a token of His mercy, however, and as a proof of His loving-kindness, He hath manifested unto men the Day Stars of His divine guidance, the Symbols of His divine unity, and hath ordained the knowledge of these sanctified Beings to be identical with the knowledge of His own Self. Whoso recognizeth them hath recognized God. Whoso hearkeneth to their call, hath hearkened to the Voice of God, and whoso testifieth to the truth of their Revelation, hath testified to the truth of God Himself. Whoso turneth away from them, hath turned away from God, and whoso disbelieveth in them, hath disbelieved in God. Every one of them is the Way of God that connecteth this world with the realms above, and the Standard of His Truth unto every one in the kingdoms of earth and heaven. They are the Manifestations of God amidst men, the evidences of His Truth, and the signs of His glory.

All that the sages and mystics have said or written have never exceeded, nor can they ever hope to exceed, the limitations to which man’s finite mind hath been strictly subjected. To whatever heights the mind of the most exalted of men may soar, however great the depths which the detached and understanding heart can penetrate, such mind and heart can never transcend that which is the creature of their own conceptions and the product of their own thoughts. The meditations of the profoundest thinker, the devotions of the holiest of saints, the highest expressions of praise from either human pen or tongue, are but a reflection of that which hath been created within themselves, through the revelation of the Lord, their God. Whoever pondereth this truth in his heart will readily admit that there are certain limits which no human being can possibly transgress. Every attempt which, from the beginning that hath no beginning, hath been made to visualize and know God is limited by the exigencies of His own creation—a creation which He, through the operation of His own Will and for the purposes of none other but His own Self, hath called into being. Immeasurably exalted is He above the strivings of human mind to grasp His Essence, or of human tongue to describe His mystery. No tie of direct intercourse can ever bind Him to the things He hath created, nor can the most abstruse and most remote allusions of His creatures do justice to His being. Through His world-pervading Will He hath brought into being all created things. He is and hath ever been veiled in the ancient eternity of His own exalted and indivisible Essence, and will everlastingly continue to remain concealed in His inaccessible majesty and glory. All that is in heaven and all that is in the earth have come to exist at His bidding, and by His Will all have stepped out of utter nothingness into the realm of being. How can, therefore, the creature which the Word of God hath fashioned comprehend the nature of Him Who is the Ancient of Days?

the beloved of the one true God, not to view with too critical an eye the sayings and writings of men. Let them rather approach such sayings and writings in a spirit of open-mindedness and loving sympathy. Those men, however, who, in this Day, have been led to assail, in their inflammatory writings, the tenets of the Cause of God, are to be treated differently. It is incumbent upon all men, each according to his ability, to refute the arguments of those that have attacked the Faith of God. Thus hath it been decreed by Him Who is the All-Powerful, the Almighty. He that wisheth to promote the Cause of the one true God, let him promote it through his pen and tongue, rather than have recourse to sword or violence. We have, on a previous occasion, revealed this injunction, and We now confirm it, if ye be of them that comprehend. By the righteousness of Him Who, in this Day, crieth within the inmost heart of all created things: “God, there is none other God besides Me!” If any man were to arise to defend, in his writings, the Cause of God against its assailants, such a man, however inconsiderable his share, shall be so honored in the world to come that the Concourse on high would envy his glory. No pen can depict the loftiness of his station, neither can any tongue describe its splendor. For whosoever standeth firm and steadfast in this holy, this glorious, and exalted Revelation, such power shall be given him as to enable him to face and withstand all that is in heaven and on earth. Of this God is Himself a witness.

Repose not yourselves on your couches, nay bestir yourselves as soon as ye recognize your Lord, the Creator, and hear of the things which have befallen Him, and hasten to His assistance. Unloose your tongues, and proclaim unceasingly His Cause. This shall be better for you than all the treasures of the past and of the future, if ye be of them that comprehend this truth.

As printed in MAM., the Lawh-i Salamn I concludes  with the following prayer: 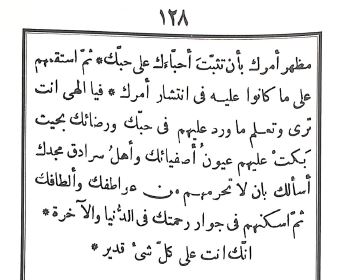