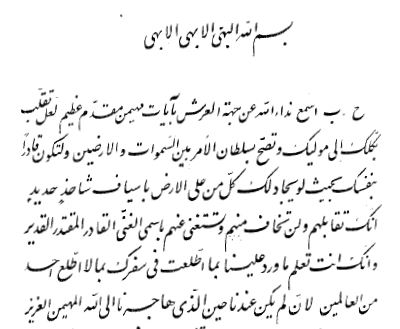 Sūrat al-Ahsab (The Surah of the Companions)

Mss. and printed texts can be found here :

Complete and partial Translations and  comments.

The Sūrat al-Ahsab (The Surah of the Companions) or Lawh-i Habib (Tablet for the Beloved One) was written during the early Edirne (Adrionople) period (c. 1864-5) for Mirza Aqa-yi Munib Maragha'i. In Arabic and over twenty pages in length in the original Arabic (perhaps 35pp in translation), it commences (see image above) with a new Baha'i neo-basmala which reads, "In the Name of God, the Splendid, the All-Glorious, the All-Glorious" (bismillah al-bahiyy al-abha al-abha).  This establishes the importance of the title al-baha' (The Splendid, the Glorious) and its derivatives (al-bahiyy, the "Splendid") are of great  theological importance, ultimately for the Baha'is, the al-ism al-a`zam, the greatest Name of God incarnate in the person of  Mirza Husayn `Ali Nuri, entitled Jinab-i Baha', then Baha'-Allah, etc. Following this new literary commencement celebrating the splendor of God occur the two Arabic letters H and B which are an acronym for the Arabic word and title Habib, meaning the one "beloved" (habib) of God.

The Surat al-Ahsab is mainly addressed to Babis, a few of whom are specifically named : Jawad, Rahim, `Ali in Qaf, etc.  Baha'-Allah indentifies himself  as the promised One of the Bayan who appeared in the "year nine", 1269 AH or 1852-3 (AQA IV:13). He is the eschatological "return of `Ali" [Muhammad Shirazi], the Bab, and the eschatological "Trumper Blast" as the "Most-Great Trump" (AQA IV:13). He is also the "Lote-Tree of the Extremity" (Q. 53, etc): "Say By God! The Lote Tree of Baha' hath born fruit in this Ridwan as the fourfold Temple (haykal al-tarbi`) [-H-S-Y-N - Husayn] in the threefold form (hi;at al-tathlith) [= `+L=Y = `Ali]" and much more besides. Jihad (religious warfare) is abolished as accords with his earlier Ridwan declaration.

This Tablet then opens,

"Hearken unto the Call of God (nida'-Allah) coming from the direction of the Divine Throne (al-`arsh) with verses,  He being the Help in Peril, One Pre-Existent (al-muqaddam) and One All-Knowing  (al-`alim).

This Tablet concludes with the following address : Say: By God! On account of their names, there is a sounding of the Bell (al-naqus) and the Bird of Paradise (dik al-firdaws) warbleth forth ...