(Tablet of the  Quintesence of Laudation)

The Lawh-i Jawhar-i Hamd (Tablet of the Quintessence of Laudation) of Mirza Husayn `Ali Nuri, Baha'-Allah (1817-1892) is a medium length largely Persian scriptural Tablet of considerable doctrinal importance. It should most likely be dated to the mid. late West Galilean or (loosely) Acre/`Akka peroiod (1868-1892), probably dating to the 1880s.

According to one ms. it opens as follows :

The quintessence of laudation (jawhar-i hamd) and the ... 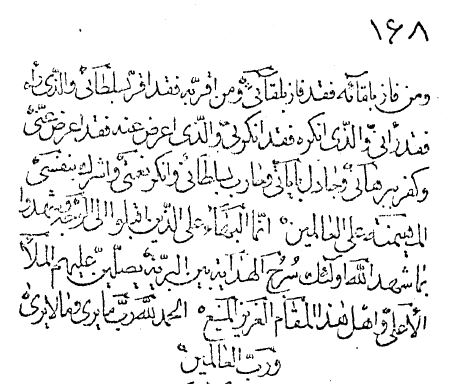 This unpublished Persian Epistle which is largely addressed to the people of the world collectively opens with a paragraph in which God 's supreme  transcendence  and essential  incomprehensibility are clearly and categorically set forth. The next few paragraphs contain many points of interest and serve to underline the elevated  status of  the Manifestations or Messengers of God. The "Blessed and Primordial Word (kalimat) which shone forth from the Dawning-Place of the (mashiyya) of the King of the Divine Oneness [God]” as the agent of creation is equated with the "Logos-Self" (nafs) of the Manifestation of God. As the exclusive intermediaries between God and creation, the great Prophets represent the Godhead and express His divinity. Prophecies about the eschatological advent of God refer to them and to Bahā-Allāh in particular, for, as the "Most Great Theophany" (ẓuhūr-i a'ẓam ), he has been manifested in every age and cycle with a  particular Name, and appeared on the "Day of God." Despite the fact that   "He Who Conversed  with  the Speaker” (mukallim-i  kalim) [Moses]" disclosed  the "Greatest Name" ( ism-i a'ẓam) or identity of  Bahā'-Allāh,  souls have remained  veiled  from him.

About half way through his Tablet of the Quintessence of Laudation, Bahā-Allāh mentions how different religious factions have been held back from faith on account of his various claims to nubuwwa ("prophethood"), wilāya ("providential Imam-type overseership") and ulūhiyya ("Divinity"). He expresses astonishment that Jews, Christians, and other communities in possession of a Ho Book, object to his claim to divinity and writes: "Say:  O thou who art dumb! Hast thou not heard the Call of God from the [Sinaitic] Tree (al-shajara) raised up from the Luminous Spot (al-buq'a al-nūrā), “No God is there except Him." Then consider this and be not such as hearken but fail to comprehend” It is implied that Bahā’-Allāh’s claim to divinity was foreshadowed on Sinai.

In defending the legitimacy of his claim to divinity, Bahā'-allāh also quotes and comments on that line of the ''blessed Sermon of the Gulf which shone forth from the horizon of the heaven of guardianship [Imam 'Alī]" in which the advent of "He Who conversed with Moses" (mukallīm musa) on Sinai is mentioned. He stresses the importance of this prophecy and declares that through it "all the peoples of the world were given the glad-tidings of the [eschatological] manifestation of God (ẓuhūr Allāh)." Referring to himself, he explains: "Today He Who conversed with Moses (mukallim musa) hath appeared and hath cried out, 'I, verily am God.' " That a Prophet of God would be made manifest and make such claims is, Bahā'-Allāh also argues, anticipated in various Islamic traditions (aḥadith) and quranic texts. The "Day of Resurrection" is the time of the rising up of the "Manifestation of the Logos-Self of God" (maẓhar-i nafs Allāh).