On the origin and uses of the Islamic Arabic honorific title Baha' al-Dawla and related epithets.

Here it may be noted that the word baha’ has occurred hundreds of times throughout the Islamic centuries as a component of Islamic honorific titles applied to eminent Muslims. Hundreds of Muslims have been designated "Bahā’ al-Dīn", the "glory/splendour of religion". A few examples (see further below) are Bahā’ al-Dīn Walad of Balkh (d. 1230 CE), meaning "the splendour-glory of religion from Balkh", the designation of the father of Jalāl al-Dīn Rūmī (1207-1273 CE), famed author of the `Persian Qur'ān/ Bible', the Mathnavī. The founder of the Naqshbandiyya  Sufi order was Bahā’ al-Dīn Muhammad Naqshband (d. 1391 CE.). Some Muslim individuals had or took the designation Baha'i. We might recall the name of the Ottoman jurist,  theologian and poet Baha'i Mehmed Effendi (b. Istanbul, 1004/1595-6 d. 1064/1654). The latter notable was also a one time Shaykh al-Islam and the grandson of the historian Sa'd al-Din Effendi (c, 1536-1599) (see the EI2 entry on him by Lewis, I:915). Better known and also a one-time Shaykh al-Islam, was Baha' al-Din Shaykh Bahā'i, the Safavid era polymath, Muhammad ibn Ḥusayn, Bahā' al-Din al-`Āmilī (b. Baalbeck 953/1547- d. Isfāhān 1030/1622) (see further below).

Select Persons accorded the title Baha' al-Dawla in Islamic history with special reference to the laqab Bahā' al-Dawla of the Buyid or Buwayhid ruler Baha' al-Dawla. 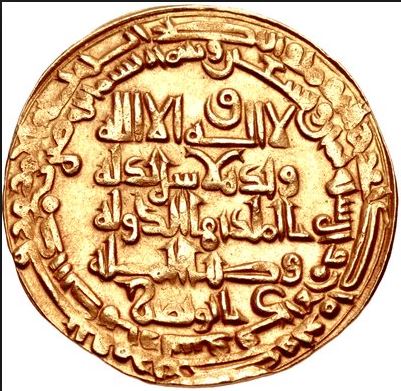 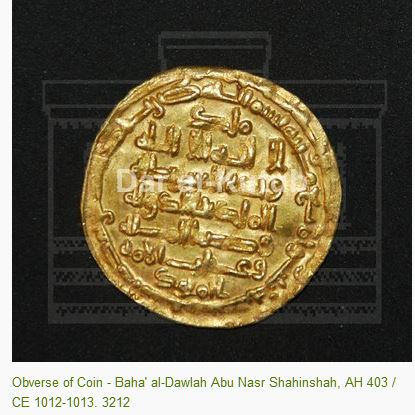 An example of  coins of Baha' al-Dawla  : the first  reasonably clear coin on the (above) left comes from the Wikipedia page`Baha' al-Dawla' and the Gold Coin to its right is followed by its typed out text in modern Arabic script. In both these example it is the third central line which includes the title  Baha' al-Dawla. In translation, the key lines of the obverse of the central coin read as follows (see the typed Arabic text on the right):

The central or second gold coin above (with typed text to its right) was minted in Baghdad and Rayy [Latin Rhagae = Tehran]. It is an example from  Baghdad minted at the `Madinat al-Salam' (Abode of Peace) and apparently dated 404/1013-14. The words Baha' al-Dawla , the "Glory of the State/ Religion/ Dynasty" (several translations are possible) can be seen on its obverse (see the URLs or links below and especially Stanley Lane-Poole,  Catalogue of Oriental Coins in the British Museum. II :680) :

Fīrūz Khārshādh, Bahā' al-Dawla  was the son of Fannā (Panāh) Khusraw ʿAḍud al-Dawla (936-983 r. 270/949-403/983). He was a third generation twelver Shi`i ( with probably Zaydi forbears) Būyid amir, governor, ruler or king with sovereignty over Iraq and Persia (especially Rayy, now near Tehran and Shiraz in southern Persia). Aged nineteen, he was invested in the `Abbasid capital Baghdad on 10th Jumada I  379 / 16 August 989  (so Hachmeier `Bahā' al-Dawla`in EI3 , 2015). The Būyid or Buwahid dynasty was of Daylamite origin and ruled parts of Persia and Iraq between c. 334 and 403 AH  or c. 945 - 1012 CE (dates vary). They ruled as a confederation coming to claim Persianate kingly authority without totally eliminating or always overuling  the contemporary members of the `Abbasid Caliphate - which was presided over by Sunni Caliphs who  had ruled from  post-`Umayyad times, after 750 CE.,  until the Mongol invasion in 1258  CE.. The `Abbasid capital  cities had being variously situated in Damascus, Samarra, Raqqa, Baghdad, Kufa and Cairo. Baghdad was taken by the Buyid  Ahmad ibn  Buya in 334/945. With this conquest the then Sunni caliph (from 333/944-334/946) al-Mustakfi (d. 338/949) granted Dawla ("state") titles to the three Buyid brothers: Ahmad ibn Buya = Mu`izz al-Dawla; Hasan ibn Buya = Rukn al-Dawla and `Ali ibn Buya = `Imad al-Dawla. The title Bahā' al-Dawla was later perhaps given to Fīrūz Khārshādh (see above) by his father, the powerful Shirzil ibn Fanā-Khusraw , ʿAḍud al-Dawla (d.372/983). We may also note at this point  that Baha' al-Dawla did force the replacement through abdication of the `Abbasid Caliph `Abd al-Karim ibn al-Muti`, Abu al-Fadl al-Ta'i" (d.383/1003) preferring (for largely financial or reasons of greed) the  weak but new `Abbasid caliph Ahmad ibn Ishaq, Abu al-`Abbas al-Qadir (r.381/991-422/1031).

Bahā' al-Dawla ( = "Glory of the State/Religion...) invaded Fars (S. Persia) where he subsequently died. The date of his death is now usually reckoned as having occured  on the 5 Jumādā II 403/22 December 1012 (see  Nagel 1990 article `Buyids' in EIr., Vol. IV, Fasc. 6, pp. 578-586). In 389/999 Baha' al-Dawla established himself in Shiraz which city he made the center of his Buwayhid government  for the following fourteen years of his reign (Donohue, 1969:80). Baha' al-Dawla was succeeded in 988 by his appointee Abu Shujā' (d. 993; r. 403/1012- d. Shiraz, 415/1024), entitled Sharaf al-Dawla (The Nobility of the State). The latter also assumed the titles Sultan al-Dawla (Sovereign of the State) and Mighty one of the Community ('Izz al-Milla). The word al-dawla in these Buyid laqabs or titles points to their position in the Buwayhad-`Abbasid state or dynasty, without nullifying  the somewhat weak but important ʿAbbāsid Dynasty. In fact on the 19th  of Ramadan 381/29 November 991 Baha' al-Dawla himself appointed the caliph al-Qādir Bi'Allāh who reigned until 422/1031 (so Hachmeier EI3 `Baha'- al-Dawla). The interrelationships of `Abbasid Caliph and Buyid ruler cannot be gone into in detail here though it may be noted that in his 2002 McGill university dissertation `The Reign of the Caliph al-Qadir Billah 381/991- 422/1031' Udjang Tholib  has written, "If the reign of Baba' al-DawIa ... marked the beginning of the collapse of the Buwayhids, the reign of the caliph al-Qadir marked the restoration of the `Abhasid caliphate if not in terms of real power at least in those of prestige" (2002:127).

On  some of the extant coins (cf, the URLs and images above) and inscriptions of Baha' al-Dawlah (the Glory of the State/ Religion/ Dynasty) he is also (sometimes  immediately) referred to as Ḍiyā' al-Milla (Radiant Splendor of the Religion, Religious state) as well as "the Ghiyath al-Umma ("Provider of the [Islamic, religious] Community"  and King of Kings (malik al-muluk = Shāhānshāh ). This suggests that the first two parallel, successive titles claimed by Firuz, "Baha' al-Dawla  (the Glory of the Dynasty [`Abbasid Empire])" and Ḍiyā' al-Milla, ("the Radiant Splendor of the Nation/Community"), highlighted the motif of the radiant or brilliant glory of the ruling office which would seem to echo earlier expressions of Persian sacred kingship. Such would be in line with the radiant hvareno/ farr (supernatural "glory" or "splendour") of the Zoroastrian kings of pre-Islamic Sassanid and  also pre-Christian antiquity. The Abassids (ruled 750-1258) might have had their weak caliphal office, but the contemporary Buyids had come to see themselves as having a perhaps loftier, Persianate kingly station, that of of divinely sanctioned kings with splendid kingly glory and authority. The early Buyid  Hasan Rukn al-Dawla ibn `Ali (c. 935 - d. 365/975) as well as his cousin `Adud al-Dawlah, the father of Baha al-Dawla had been so bold as to have a coin struck on its front or obverse the Pahlavi phrase, "May the glory of the shahanshah increase" (Bahrami, 1952: 18, Garthwaite, The Persians, 128). This coin, at either side of the head, has inscribed with the evocative Pahlavi phrase "Farrah afzud Shahan Shah" - the Islamic shahada ("There is no God but God") being on the margin of the coin in Arabic Kufic script. Here the word "glory" linked to the Shahanshah (King of kings) title is the Pahlavi   farrah/khurrah/khwarr  (= New Persian farr) which is also the Zoroastrian khvarenah of great import in the roots of the splendor of kingship (cf. the first king Yima) and such latter-day messianic savious figures as Saoshyant (cf. Shah Bahram and refer Gnoli, `Khvarenah' Enc. Rel. 8:297) . I wonder if this latter Persian farrah, "glory", when befittingly translated  into Arabic as baha', lies behind or accounts for the laqab or title of Baha' al-Dawla which itself may lie at the root of the later, more common title or laqab Baha' al-Din.

This claim to divinely ordained supernatural "glory" might  also be supported by the fact that Baha' al-Dawla (and other Buyid rulers) claimed to be (like certain Sassanian kings e.g. Bahrām VI Chōbīn, king of Iran during 590-91) the very  Shāhānshāh, (the "Shāh of Shāhs") or "King of Kings". This latter title having Sassanid or even earlier roots was probably first claimed in the Islamic centuries by the Buyid `Aḍud al-Dawla ("Power of the State", d. 983). The Buyid rulers, in fact, adopted many epithets they thought befitting of their divinely ordained ruling position;  including, for example (in addition to those abovementioned), `Imad al-Dawla ("the Support of the State"); Rukn al-Dawla ("Pillar of the State") the title of the longest surviving  of the three founding brothers , 335-366/947-977 ; for details see Donohue, 2003:65ff) ;  Fakhr al-Dawla ("the Honor-Glory-Pride of the State"), Shams al-Dawla ("the Sun of the State") and Majd al-Dawla ("the Splendor [Glory] of the State"; for some details see Bosworth, 1996: 154f). Only one of them  adoted the title Bahā' al-Dawla  (cf. though the wider appropration of Pahali farrah, "glory") over their century and more quasi-dynastic rulership; not that this should adoption be taken as a sure sign or token of special personal greatness or honor (cf. Mottahedeh, 1996: 49 where Baha' al-Dawla is referred to as "a comparatively immoral ruler"). We may further note at this point, that none of the persons listed on this webpage who were accorded or took for themselves titles like Baha al-Dawla ("The Glory of the State") or Baha' al-Din  ("The Glory of Religion"), need be viewed as being particularly special, inspired or important, though some evidently were. The ancient  "glory" of Zoroaster and his kingly representatives came to be reflected in the Islamic world through Buyid rulership transformed into Persianate kingship. In the case of the human Baha' al-Dawla, however, this farrah= farr ... glory" hardly approached anything like its majestic linguistic, philogical, historical and theological implications.

An Inscription of Bahā' al-Dawla

In the 1969 article of Donohue,`Three Buwayhid Inscriptions' (in Arabica 20, see bib.) we find a reproduction of

Further sources on Bahā' al-Dawla and the Buyids :