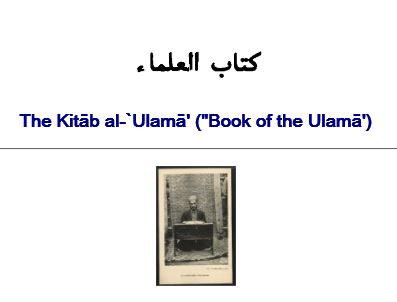 This early epistle of the Bab, the Kitab al-`Ulama' (Book for the Clerics) is primarily addressed to the divines (`ulama') of Qajar Persia and elsewhere. It commences and ends as follows (the Arabic citations are from Afnan, 2000: 107 and 111 : 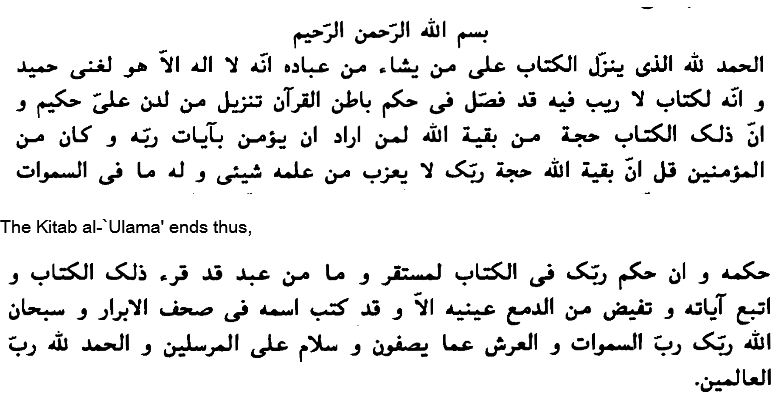 There are at least six extant mss. and one printed text of the Kitab al-`ulama':

The Kitāb  al-`Ulamā’  (Book for the Clerics)

from the text in Afnan, 2000 as compared with other select mss.

[1] Praised be to God who sends down the Book (al-Kitāb) upon whomsoever He willeth among His servants. He, verily, no God is there except Him. He is indeed, One Independent, All-Wise. [2] Such, assuredly, is a Book about which there is no doubt. (cf. Q. 2: 2). [3] It was indeed set forth in the mode (ḥukm) of the bāṭin (“inner dimension”) of the Qur’ān, sent down (tanzīl) on the part of `Alī [Muhammad Shīrāzī = the Bāb], one wise (ḥakīm), [4]  for this Book (dhalik al-Kitāb) is a Proof (ḥujjat) from the Remnant of God (Baqiyyat-Allāh) [= the messianic and Hidden Imam] directed towards whomsoever desires to believe in the verses of his Lord and thus to be numbered among the believers.

[5] Say: `The Remnant of God (Baqiyyat-Allāh) is a Proof (ḥujjat) from thy Lord, for no single thing escapes his knowledge and his is whatsoever lieth within the heavens and on the earth. [6] Such as believe in this [new bāṭinī] mode (ḥukm) of the Book (al-Kitāb) are ones characterized by humble submissiveness (al-khā`shiūn).

So Fear ye God! O people of the Qur’ān!

Then acknowledge that the [messianic] Proof of God (Ḥujjat-Allāh) has arrived before you, consonant with the fact that you have heard a [revealed] verse (āyat) from before Our servant `Alī [Muhammad Shīrāzī = the Bāb], one wise (ḥakīm).  [8] Aforetime did We send a Book (al-kitāb) [= the Qur’ān/ Qayyum al-asma'] unto you in which were clear verses (āyāt bayyināt) [cf. Q. ADD ] coming from Us unto a people possessed of intellect.

[9] This [now] is indeed [also] a Book (al-kitāb] which hath been revealed on Our part in the mode (ḥukm) of the bāṭin (“inner dimension”) of the Qur’ān, according to an Upright Path (ṣirāt qayyīm). [10] Yet God doth not witness from most of you aught save the word of infidelity (kalimat al-shirk). [11] On the Day of Resurrection (yawm al-qiyāma) God will differentiate amongst you in line with justice (al-`adl). [12]  Thus, that Day none shall  prove able to find for themselves a patron (walī) or a helper (ẓahīir) [cf. Q.       ].  [13]