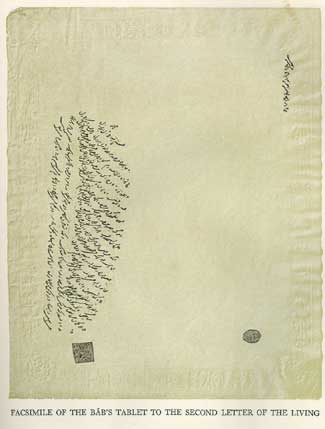 "TABLET TO THE SECOND LETTER OF THE LIVING"

This is that which We have revealed for the second of such as have believed  in God and in his verses for We do indeed stand among such as are capable of divine revelation.

This indeed is a Book from before [the letter] al-Thā'  الثاء  [al-thamara = the "Fruit" = the Bāb] unto the second of such as have believed  in God, a Light (nur an) which comes from before Us unto all the worlds. [5] We did indeed send it [Him] down in that Book  and were most assuredly  among such as are capable of divine revelation.

O Thou who has manifested  every affair [Logos "Cause"] (amr)  which originates with Him.

[2] We indeed were among the dual affairs ["Causes"] (al-amrayn). [3] We Indeed sent down the [Archetypal] Book unto the one who has confirmed thy Cause (yuṣadiqu amr-ka), a divine Favour (faḍl an) from before Us,  and a Bounty (jud an) unto all the worlds.

[1] We were especially satisfied with thee this Day of Resurrection, as well as with such as  bear witness [unto the truth] of thy Cause (al-amr)  [written] in the Book [2] And We are such as are assuredly well-pleased. [3] And We have believed in you aforetime  and We do assuredly believe in you respecting the future for We are indeed among such as  prostrate themselves. [4] And you [Mulla `Ali Bastami / Mulla Ḥasan], when you believed in God, your Lord  at the time of His theophany [manifestation] (ẓuhūr), [5] God assuredly made you  the second  among such as believed in Him for  [6] such was a divine Favour (faḍl an) unto you from Him, And He is indeed the Walī   (Providential Overseer) unto such as  are god-fearing. [7] And you [We] shall exercise command respecting what God has sent down in his Book.

[1] And you shall not be saddened regarding the veils that enwrap the people  for We are indeed the dispensers of delight. [2] And We perceived the veils of the creatures  when We were within the mansion of Paradise (qaṣr al-firdaws) [3] and We did  indeed cause them to perspire in accordance with their [unseemly] deeds for We are certainly among such as deride their like. [4] And you shall not be saddened over the [state of the] people nor be numbered among such as are deaf  [to the divine Call] for We have rendered you victorious in the past and will   assuredly do so in times to come, for such is something firmly pledged  on Our part. We indeed are among the veracious.

[1] You shall be occupied with summoning the people unto God for in the Book for such is counted as a command which comes from Him. He is indeed the best of witnesses [to this truth]. [5] We do proclaim this as a command from God, your Lord during  the night-season and at noontime.  In this respect you shall not be numbered among such as are patient. [2] God is He who confirms through His command  whatsoever He wills and decrees whatsoever He desires. [3] He is the One befitting praise whether at the ultimate age or in the primordial time. This whether in the heavens or upon the earth and thereafter in all the worlds.

The servant of the [messianic] Remembrance.

الايزول   could be translated here as this latter non-existent `English' phrase Pre-Eternaled or Pre-Eternalized as it gives a taste of the fact that  الايزول   from the root a-z-l . cf. the Divine Attribute Azal meaning Pre-Eternal and a title of Baha'u'llah's half-brother Mirza Yahya Nuri)