Sūrat al-kifāya ("The Surah of the Sufficiency)

For the  ḥarf al-jūd  ("the Letter of the Divine Bounty) whose precise  identity is uncertain. 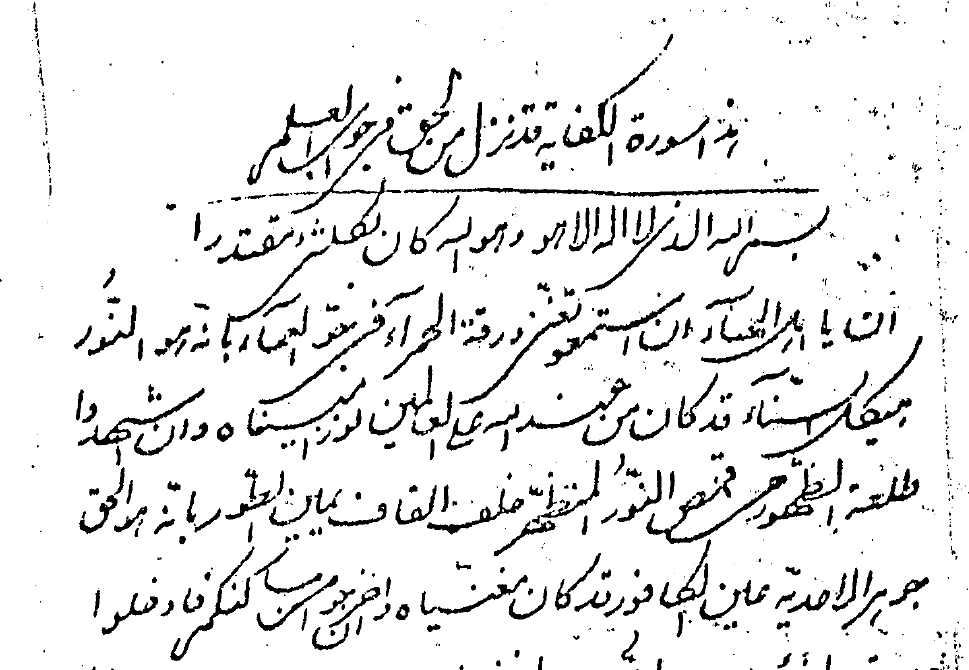 This is the  Sūrat al-kifāya  (Sura of the Sufficiency). It was assuredly sent down on the part of the True One (min al-ḥaqq) regarding the question of knowledge  (fī jawāb al-`ilm).

In the Name of God, who, no God is there except Him. And He is God who was Powerful over all things.

Hearken unto the melody of the Crimson Leaf  (waraqat al-ḥamrā') in the Paradise of the Divine Cloud (jannat al-`amā') for He, verily, is the Light  of  the Radiant Temple Who acts on behalf of God, as a Manifest Light unto the worlds  (nūr an mubīn an).

He is assuredly the One before Whose knowledge not a single thing, whether in the heavens or on the earth, or what lieth between them, remains hidden. And He is God Who hath ever encompassed all things.

The Arabic Sūrat al-kifāya ("The Sura of the Sufficiency")

The Arabic Sūrat al-kifāya ("The Sura of the Sufficiency") of Bahā-Allāh remains unpublished and unstudied. It is nowhere listed or referred to by Shoghi Effendi. A photocopy of the difficult ms. can be found in INBMC 36:277-280.  I have supposed that the Surat al-kifāya  might date from the earliest Iraq period (2TB1) or date to the pre-Kurdistan (1856 CE) Iraq period. This especially since it has much in common with the definitely early  Lawḥ-i kull al-ta`ām (Tablet of All Food). This dating is, however, highly speculative. In 1988/9 I requested a copy from Haifa wondering if they had a better mss than that reproduced in INBMC 36 and it appears that they do not because I received  from the BWC in 1984. a slightly enlarged photocopy of the INBMC 36 ms.

The Surat al-kifāya  was primarily addressed to one designated as the ḥarf al-jūd ("the Letter of [the Divine] Bounty/ Bountiful One") whose identity is uncertain. The designation ism al-jūd ("the name of the Bountiful One") and Ism Allāh al-jūd (= "the Name of God, the Bountiful One";  Mazandarani, Asrar 3:57ff)) was applied in many Tablets of Bahā-Allāh to Āqā / Mīrzā Muhammad Jawād Qazvini (d.191? CE), ultimately an opponent of `Abd al-Baha', one of the so-called ahl al-tawḥīd or muwahhidun, "Unitarians", (cf. Browne, Materials.. viiiff). He was certainly in Baghdad prior to 1862 though it is not at all clear if he was ever designated harf al-jūd  or might be the one so designated in the Surat al-kifāya.

There is also a fairly clear reference at XI:4 to Yaḥyā's early (or future?)  Kitab al-nūr  (The Book of Light, c. 1854) several mss. copies of which are still extant; in, for example, the British Museum [Library]). Yaḥyā' is pictured in the Surat al-kifāya  as the source of Bābī knowledge. As Bahā'-Allāh categorically stated in many of his post-1863 scriptural Tablets, he upheld the sublimity of Yaḥyā's station before he became subversive and anti-Baha'-Allah. He kept much of this  Bābī-Azalī rebellion secret for two decades or more (c.1846-66), before, that is he more openly announced his own theophanic status (1863+6,etc). The issue of  Mīrzā Yaḥyā's remaining outwardly hidden and isolated in the face of the need for a manifest centre of Bābī authority and revelation,  is obvious. Despite his obfuscation Yaḥyā must be viewed by the early, post (July 9th)1850  Bābīs  as a centre of Bābī gnosis.