(The Surah  of the Oration)

Being completed and revised -April 2014

The wholly Arabic five or six page Sūrat al-Khiṭāb (`The Surah of the Oration` or `The Surah of the Address' / `The Surah of the Discourse') of Mirza Ḥusayn `Alī Nūrī, Bahā'-Allāh (d. 1892 CE) may be dated to the early-mid. Edirne (Adrianople) period (1863-1868). It would appear on internal and external grounds to date from around 1864-5 exhibiting, for example, features characteristic of this period including claims addressed to Bābīs and the voicing of the claim to be the "return" of the Bāb or messianic Dhikr-Allāh (Remembrance of God); claims reflected, for example, in such alwāḥ as the Lawḥ-i Sayyah (`Tablet of the Traveller' see  URL).

The Babi-Baha'i basmala formula here includes the phrase ufq al-abha ("The All-Glorious [Splendid] Horizon") may be suggestive of the prophetic reference to Baha'-Allah in the (probably authentic) Wasiyyat-Nama ("Will and Testament") of the Bab.

The phrase  ADD  driving therefrom was inscribed on one of the seals of Baha'-Allah perhaps dating to the early Edirne period.

The Sūrat al-Khiṭāb is here translated into English for the first time. Among the various unpublished manuscript sources consulted were :

The title Sūrat al-Khiṭāb could be taken to imply the stunningly eloquent nature of this Sūrah since words formed from the Arabic root kh-ṭ-b have connotations of  rhetorical eloquence in the course of an address, speech or sermon. The word   الـخـطـاب khiṭāb  is fairly common in classical and modern Arabic.  ADD

The opening paragraph of the Sūrat al-Khiṭāb does in fact open with a series of statements expressive of Baha'-Allah's claims during the early -mid. Edirne [Adrianople] period (1863-1868) exhibiting a powerfully sustained rhyme.

(The Surah  of the Oration)

The opening lines according to INBMC 83:154: 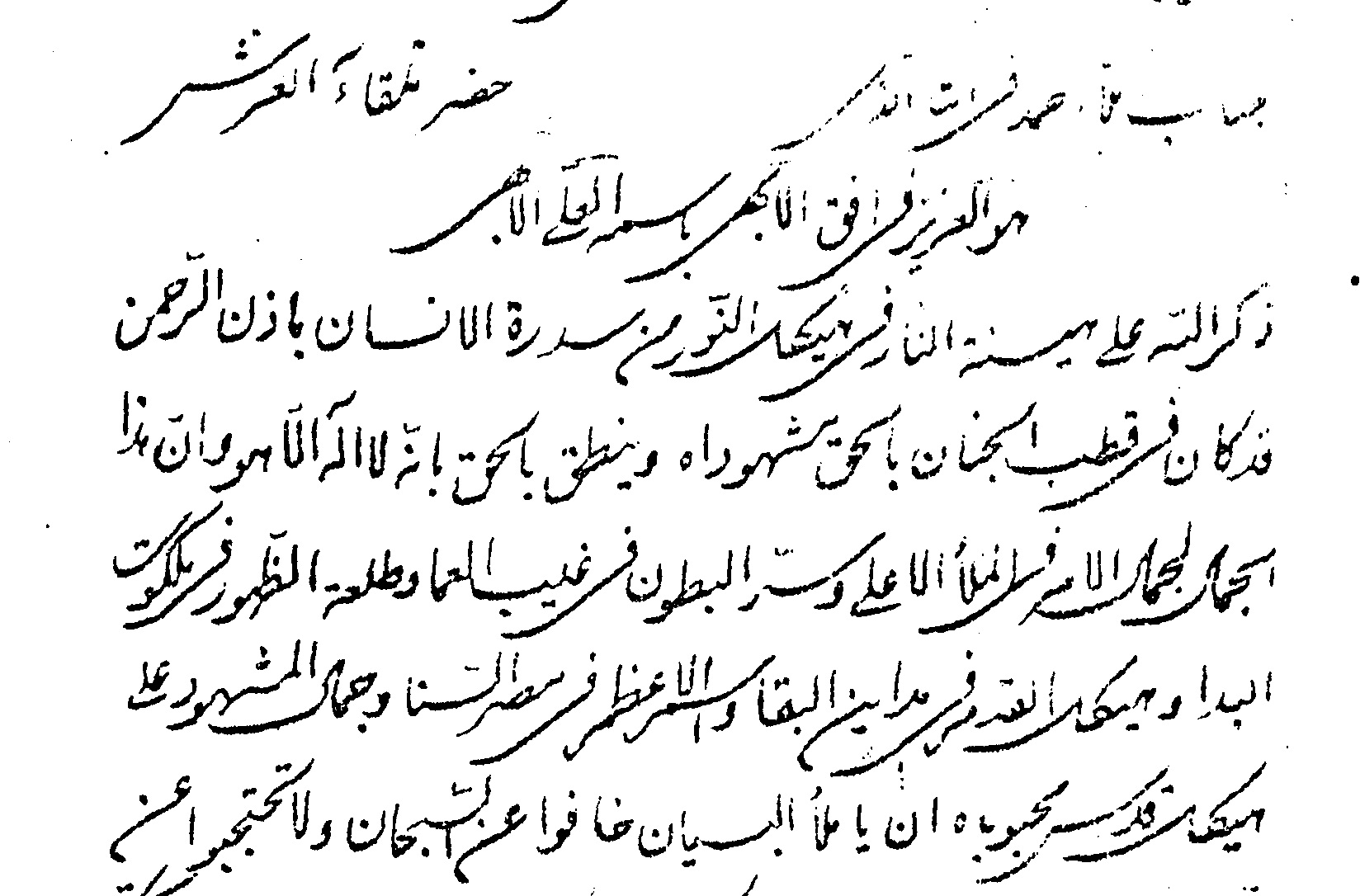 Jinab-i Mulla `Abd [Muhammad] of the [region of the] Euphrates (Firat) [Baghdad] who was present before the [Divine] Throne (al-`arsh).

This was sent down on the part of God, the Powerful, the Mighty, the Munificient.

on account of his Name the Exalted (al-`Alī) the all-Glorious (al-abhā).

[1] The Dhikr-Allāh (Remembrance of God) in the form of Fire (ha'it al-nār), in the Temple of Light (haykal al-nūr), from the Lote-Tree of  [the Perfect] Man (sidrat al-insān), hath, in very truth, been made manifest with the permission of the All-Merciful (al-raḥmān) at the very Apex of Paradise (quṭb al-jannān). [2] And He, in very truth, crieth out [saying] `He, verily, no God is there except Him'. [3] And this Beauty (al-jamāl) is none other than the Beauty of the Cause [Command of God] (jamāl al-amr) within the Supreme Horizon (fī'l-malā' al-ā`lā). [4] the Mystery of the Inmost Depth (sirr al-buṭūn) in the Hidden Sphere of the Divine Cloud (ghayb al-`amā'). [5] the Countenance of the Divine Theophany (ṭa`at al-ẓuhūr) in the Kingdom of the Regeneration (malakūt al-badā'), [6] the Temple of Pre-existence (haykal al-qidam) in the Cities of Immortality (madā'in al-baqā'), [7] the Greatest Name (ism al-a`ẓam) in the Egypt of Splendor (miṣr al-sanā'), [8] the Manifest Beauty (jamāl mashūd) in the beloved Temple of Holiness (haykal quds),

O Concourse of the Bayān!

Fear ye the [veils of the Divine] Grandeur (subḥān)  and veil not thy selves from the One who came in the shadows of Holiness  with a Sovereignty, which was, in very truth, resplendently clear (mubin an). [2] Accompanying him at his right-hand was the Kingdom of God (malakūt Allāh), then at his left the Kingdom of Names (jabarūt al-asmā')  and before him the mighty, powerful hosts. [3] Follow ye O people, the Cause of God (amr Allāh) and His Decree (ḥukm)! And do not follow the [way of] Satan (al-shayṭān). [4] Follow ye the Beauty of the All-Merciful (jamāl al-qidam) during these days and fear ye God who created thee through a command on His part.  [5] While on earth do not be a sinful oppressor (jubbār an athīm an).

Hearken unto that which hath been revealed (w-ḥ-y) for thee  from the Shore of Pre-existence (shaṭr al-qidam) about the Blessed, Pre-Eternal, All-Eternal  Locale in which the Beauty of the All-Merciful hath mounted up upon a lofty, mighty Throne. [2]  This to the end that thou might be attracted by the breezes of the All-Merciful unto the Throne of Riḍwān, be detached from the domain of created existence (al-akwān) and be purified from earthly defilement. [3] This is indeed an expression of the Bounty of God unto thee [as thou wouldst know] if thou should be cognisant in this respect. [4] Rise up in the Cause of thy Master then burn away the veils of idle fancy through a power which originates with Us and a sovereignty which cometh from Us. [5] Fear no one even if all on earth should combine together to wage war against thee.

This Day no soul should be reliant upon any single thing!

[2] Even if all the inhabitants of the heavens and of the earth should rise up in servitude outside of My love, My proof, My uprightness and whatsoever hath flowed out from this Mighty, all-Knowing, Pen,  [then] place [all their] vain illusions behind thee and set all [their spurious]  evidences beneath thy feet orienting thyself with luminous countenance towards a Trustworthy, Sacred Court.  [3] And thus thou should indeed enter the Locale of Paradise  and be seated in the reception hall of the Divine Throne (al-muqābalat al-`arsh)