Theology and Messianism in the Kitab-i panj sha'n (Book of the Five Grades).

The Theology of the opening lines of the KPS.

These above opening few lines (heading this abstract) of the Kitāb-i Panj Sha`n ( I-1) of the Bāb commence with a very bold “Day of God” basmala (“In the Name of God”) formula in which the qur’ānic personal Name of God الله  Allāh -- itself a contraction of the definite article = al (the) + ilāh (Deity) forming Allāh and meaning literally = the God) seems to be twice expressed in the elative or superlative (af`al). This bearing in mind that the word اله   ilāh  (= a Deity) if (ungrammatically) made into a superlative (preceded by the a vowel) prefixed (in line with the style of the Bāb) by the definite article. This (quasi-) superlative form thus also indicates Allah or God as "a Supreme Deity" hence the translation "the Supreme Deity" as representing a'lah (= a + ’ilāh). As it occurs twice here (and elsewhere) I have (loosely) translated “Deity Most Divine” then "Supreme Godhead" or something similar.
These opening words cannot be taken literally as being indicative of a Deity superior to the Ultimate Godhead but probably expresses the fact that the Godhead has been `transcendentalized' or set even higher in His-Its Ultimate Essence. This in a manner way beyond any claim to divinity made by the Bāb himself. Hence the Bāb is actually highlighting God’s absolute transcendence not claiming anything but distinctly subordinate divinity. Hence his words bi-Allāh Allāh or "through God is God". The (quasi-) superlative of God is a fitting way for the Bāb to refer to God since he is representing the Godhead as being utterly transcendent while himself claiming a subordinate or lesser level of divinity. The Transcendent Unknowable God is known through him as the knowable (lesser) Deity or Divinity. The Bāb implies that God the Transcendent or Unknowable and Ultimate Being, is way beyond even Divinity although He-it is known through (the secondary) "Godhead" or divinity of the Manifestation of God (maẓhar-i ilahī) who is the Bāb. As a divine Messenger of God representative of the eschatological Presence of God Himself, the liqā’-Allāh or "Encounter with God"  on the Day of God (yawm Allāh), it is fitting that the Bāb both associate himself with and disassociate himself from the Ultimate Deity. He represents himself only as “God” in a secondary sense and as the Deity through whom the Deity can be known.
For both the Bāb and Bahā’u’llāh all the great Messengers or Manifestations of God can legitimately claim “divinity” by saying something like (Arabic) innanī anā Allāh, oe "I, verily am God" (see Kitāb-i iqan, XX). In saying this they never mean to claim ontological identity with the absolute Essence (dhāt or dhāt al-dhāt) of the Godhead. The Manifestation of God never becomes the Absolute Godhead on the level of Essences but only represents the Godhead on the level of manifestation. Theologically it is maẓhar (manifestation) not ḥulūl (incarnation).
God’s transcendence is thus safeguarded in view of the Bāb’s claim to (secondary) Divinity in the opening of the Kitāb-I Panj Sha`n. These kinds of deep theological issues inform many parts of the highly theologically meaningful Kitāb-I Panj Sha`n. I have only loosely translated this superlative of Allāh (which actually is a contraction of the basically femine al-ilāh meaning "the God") as  “Deity Most Divine” and “Supreme Deity” though other renderings might also be equally accurate. The references to twin Deities are not intended to be polytheistic but expressive of the Ultimate Deity giving rise to the Deity of His Manifestation. The Divine Oneness (tawḥīd) is maintained in a complex and highly creative and theologically meaningful Arabic. In many of his works the Bāb commenced with a celebration of the sublime transcendence of the Ultimate Godhead. It is of course highly significant that he altered the Muslim basmala (In the Name of God, the Merciful, the Compassionate) formula by replacing the two words "Merciful" and "Compassionate" with two Arabic the two Arabic superlatives al-amna` (the most Inaccessible, ultimately Withdrawn") and al-aqdas (the Most Sanctified [Holy]): thus, "In the Name of God, the Most Inaccessible, the Most Sanctified".

Say: God is a Deity above every possessor of Divinity.  It would prove impossible for anyone to compromise His transcendence above those Doubly Divine (al-ilāhān) among His divinized Ones, whether they be [located] in the heavens or upon the earth;  neither [would it be possible] for [those] betwixt these twain, for He, verily, hath  ever been a  Deity generating Godhead.  This is a Book from God unto 'Him Whom God shall make Manifest'  for He, verily, no God is there except I-Myself, the Deity Generated among the Doubly Deified (al-ilāhān)...

The Kitāb-i Panj Sha`n very strongly underlines in several paragraphs  the fact that religion will ever be renewed. It is today a central Bābī‑Bahā’ī teaching that future divine messengers (rusul) or maẓhar-i ilāhī  (divine manifestations) will, for many thousands of years, found  and progressively renew  the eternal religion of God (= "Islam"). The Bāb’s claim to be the Shī` ī messiah did not prevent or inhibit his also predicting numerous future messianic advents using the terminology derived from Sufīsm  by referring to man yuẓhiruhu‑Allāh = `Him Whom God shall make manifest’.  The endless advent of this figure seems to be indicated in the following passage from the Kitāb-i Panj  Sha’n :

The position of the Bāb indicated here is the exact opposite of the Islamic proponents of the doctrine of the finality of prophethood, who hold that divine revelation will terminate in human history. The mention of nine successive theophanies in the passage translated above most likely indicates the endless future appearance of elevated Prophets. 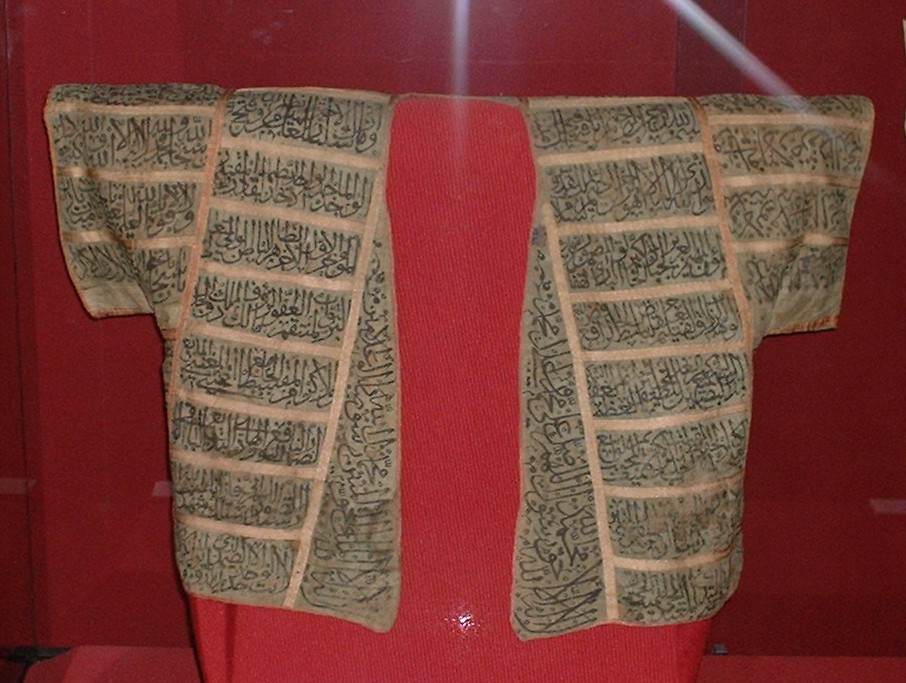 A Talismanic vest of one of the Ottoman Sultans

Various  theological, messianic and mystical-esoteric dimensions of the Kitāb-I Panj Sha`n can only be tentatively sketched here, including the nature of references to the Bābī messiah     من يظهره الله ‘Him who God shall make manifest’  (man yuẓhiru-hu Allāh)  and some aspects of such Islamic rooted “sciences” as  jafr  (gematric prognostication; numerological divination), talismans and the Names and Attributes of God. In approaching these subjects it must be borne in mind that some concepts dealt with in the Kitāb-i Panj Sha`n of the Bāb may seem strange and obscure.  Such, however, was not at all the case for pious Shi`i Muslims living in Persia (Iran) in early Qajar times and   throughout the Islamic world in various other periods and locations. The Qajar Islamic `universe of discourse' in which the Bab lived and operated as a Messenger of God was in many ways very different from the often non-religious, westernized world of today. This must be appreciated, otherwise subjects like alchemy and talismans are difficult to grasp; even though they were much appreciated and widely studied and practiced in earlier centuries. Indeed, the wearing of talismans and charms of diverse kinds was commonplace in Qajar Iran. In the regions around Shiraz, for example, there were groups of Persian Jews who earned their living making and selling talismans and charms. The Ottoman Sultans had for long worn vests or cloaks  embedded with talismanic designs and symbols in order to keep protected from evil and mindful of matters spiritual (cf. the Talismanic garment above).

As the promised Shi`i messianic Qa'im, the Bāb's was expected to have a knowledge of numerology and the esoteric sciences. He was was expected to have a mastery all kinds of occult sciences as was claimed by the fountainhead of al-Shaykhiyya (Shaykhism) Shaykh Aḥmad al-Ahsa'i (d. 1826) and others. Like the first twelver Imam `Alī (d. 40/661) who is credited with a mastery of all such inner sciences, the Bab as the `Ali  from Shiraz living in eschatological times had to prove a like knowledge. Yet, in this respect the Bab often made knowledge of amulets talismans and the like, serve another purpose. He often made such devices vehicles of messianic mindfulness, items for focusing upon the imminent new era of messianic "resurrection"' and "justice".